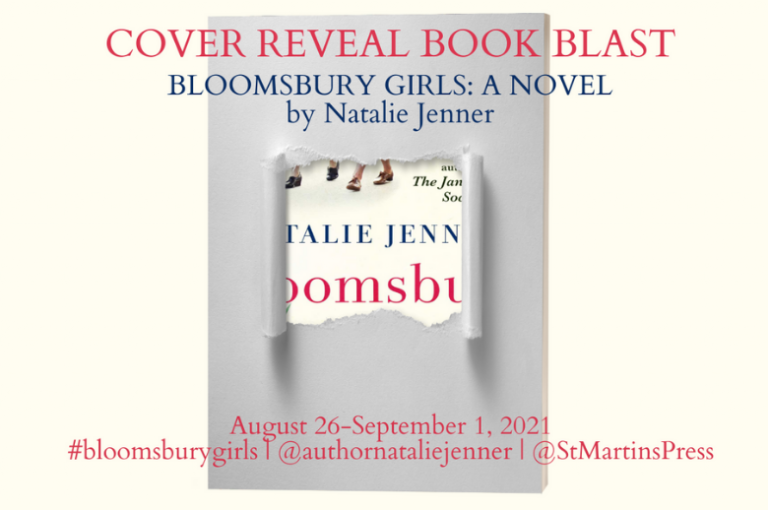 We’re so super excited to be a part of the cover reveal tour of Bloomsbury Girls by Natalie Jenner, the author of The Jane Austen Society.

Katie read and reviewed The Jane Austen Society back in June 2020, and she loved it! Here’s a little bit of what she had to say:

I would heartily recommend this book to any fans of Austen, charming country towns, and sweetly character driven stories. Grab a copy of The Jane Austen Society to spend some time being transported into the world of Austenites as they discover both Jane’s secrets and their own.

Now, Natalie Jenner is back with Bloomsbury Girls, which comes out in May of 2022. This book isn’t quite a sequel, but it is based on one of the characters from The Jane Austen Society.

So, keep on scrolling to find the eye-catching cover, and watch Literary Quicksand for a first review in a couple months!

“One bookshop. Fifty-one rules. Three women who break them all.”

The Internationally Bestselling author of The Jane Austen Society returns with a compelling and heartwarming story of post-war London, a century-old bookstore, and three women determined to find their way in a fast-changing world.

Bloomsbury Books is an old-fashioned new and rare bookstore that has persisted and resisted change for a hundred years, run by men and guided by the general manager’s unbreakable fifty-one rules. But in 1950, the world is changing, especially the world of books and publishing, and at Bloomsbury Books, the girls in the shop have plans:

Vivien Lowry: Single since her aristocratic fiancé was killed in action during World War II, the brilliant and stylish Vivien has a long list of grievances – most of them well justified and the biggest of which is Alec McDonough, the Head of Fiction.

Grace Perkins: Married with two sons, she’s been working to support the family following her husband’s breakdown in the aftermath of the war. Torn between duty to her family and dreams of her own.

Evie Stone: In the first class of female students from Cambridge permitted to earn a degree, Evie was denied an academic position in favor of her less accomplished male rival. Now she’s working at Bloomsbury Books while she plans to remake her own future.

As they interact with various literary figures of the time – Daphne Du Maurier, Ellen Doubleday, Sonia Blair (widow of George Orwell), Samuel Beckett, Peggy Guggenheim, and others – these three women with their complex web of relationships, goals and dreams are all working to plot out a future that is richer and more rewarding than anything society will allow.

“I never intended for Evie Stone to be a major character in my debut novel, let alone inspire my second one, Bloomsbury Girls. But as time went on, I found I could not leave her behind in Chawton with the other society members. And then one day I rewatched a favourite movie, 84 Charing Cross Road, and I remember thinking, there’s a whole other story in here still to be told, of an upstairs-downstairs motley crew of booksellers, and right away the figures came to life.”

“As with The Jane Austen Society, Bloomsbury Girls features multiple characters and storylines revolving around one very charming location: this time, the quintessential Dickensian-type bookshop.”

“If The Jane Austen Society was the book I wrote when I was coming out of sadness, Bloomsbury Girls was written when I was very happy, and I hope it provides a little cheer to readers during this difficult time.

Here it is! Such a pretty one!

Natalie Jenner is the author of two books, the instant international bestseller THE JANE AUSTEN SOCIETY and BLOOMSBURY GIRLS. A Goodreads Choice Award finalist for best debut novel and historical fiction, THE JANE AUSTEN SOCIETY was a USA Today and #1 national bestseller and has been sold for translation in twenty countries. Born in England and raised in Canada, Natalie has been a corporate lawyer, a career coach and, most recently, an independent bookstore owner in Oakville, Ontario, where she lives with her family and two rescue dogs.

On Packing Books for a Road Trip