May the 4th Be with You: 6 Star Wars Books from a Galaxy Far Far Away 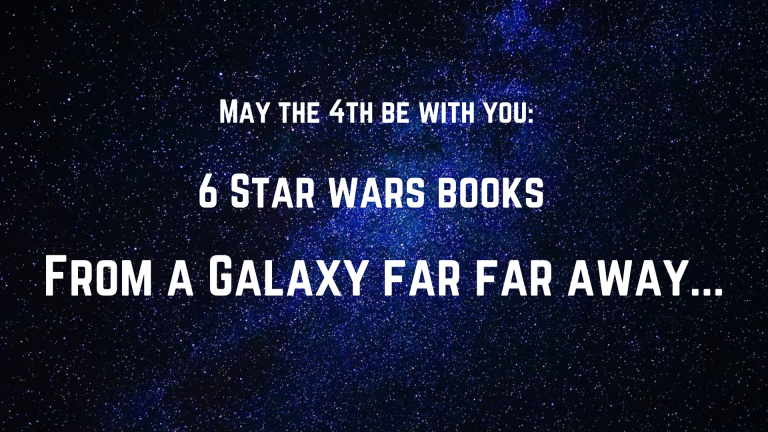 Happy May the 4th, aka Star Wars Day!

I have been a big Star Wars fan ever since I saw my first Star Wars film sometime in the midst of my middle grade years. To this day I can’t remember which movie I saw first (though since this was during the time that the prequels were being released, I am guessing it was Episode I: The Phantom Menace). It goes without saying, that I am also a reader. So is it surprising that I have read a few Star Wars books?

I will admit, even though I like to read Star Wars books on occasion, I am really, really picky! Usually if I am in a Star Wars mood, I will watch one of the movies. Books and movies are totally different experiences and some stories work better on film than as books. But over the years, I have found a few books, listed in no particular order,  that have given me the same shiver of joy as seeing A long time ago in a galaxy far, far away…appear on a black screen.

Movie novelizations are usually a hard pass for me, but I have great memories attached to this one. I only vaguely remember when Disney announced it would be releasing a new Star Wars film in December 2015. For whatever the reason, Star Wars wasn’t especially on my radar at that time. But as soon as the lights in the theatre went down and that iconic John Williams score began, I was reminded how much I loved Star Wars. I immediately downloaded The Force Awakens audiobook. The music and sound editing was fantastic and took me right back to seeing it in the theatre!

When a movie becomes as universally beloved as Star Wars, everyone remembers when, where, and how old they were when they first saw it. 2017 marked the 40th anniversary of the one that started it all, Star Wars: A New Hope, originally released in 1977. This book features 40 short stories from the perspectives of minor and off-screen characters and are set before, during, and after the events of the movie. I enjoyed the mix of more light-hearted stories along with the more dramatic introspective stories. Each were read by excellent narrators and with sound effects lifted straight from the movies.

I probably should admit right now, Obi-Wan Kenobi is, by far, my favorite Star Wars character. This book takes place immediately after the events of Episode III: Revenge of the Sith. After the fall of the Jedi and the Republic, Obi-wan flees with baby Luke Skywalker to the remote planet of Tatooine. Upon delivering Luke to his Uncle and Aunt, Obi-wan begins his new life alone in the desert. Now, finding himself truly alone, Obi-Wan must come to terms with the sudden loss of his former life, of friends, his home, and a life-long identity as a Jedi. Combine this internal struggle with an Old Western-style plot and setting – all I can say is that this remains the one Star Wars book that I enjoyed beyond it being a Star Wars book.

Master and Apprentice by Claudia Gray

Well, after Kenobi, you can see why this book had me scrambling to restart my Audible subscription! Set a few years before the events of Episode I: The Phantom Menace, Obi-wan struggles to adapt to his master, Qui-Gon Jinn’s, teaching style. Meanwhile Qui-Gon fears he is failing Obi-Wan. When an old friend of Qui-Gon’s calls on him to assist with a political dispute on the planet Pijal, the events that unfold put Qui-Gon’s and Obi-Wan’s tenuous bond to the test.

It’s my pal John at it again with his masterful story-telling! Set between the events of Episode III: Revenge of the Sith and Episode IV: A New Hope, this book is about how two lead of the lead characters in the TV show Star Wars Rebels, Kanan Jarrus and Hera Syndulla, first cross paths. Kanan is a former Jedi Knight, and if there is one thing I love almost as much as an Obi-Wan Kenobi story, it’s stories about Jedi.

This book is actually in a script format as it was originally an audio drama – and reading it felt like watching one of the films. Like the title suggests, this book provides a backstory for Count Dooku, first introduced in Episode II: Attack of the Clones, and portrayed by the iconic Christopher Lee. Before he was the insidious Count Dooku the Sith lord, he was Dooku, Jedi Master, this is his story prior to becoming seduced by the dark side. As I have said before, Jedi stories are my specialty!

These are a few of the Star Wars books I have read and enjoyed over the years. Do you read any Star Wars books? I would love to know! And, of course, May the Force be with You, always!