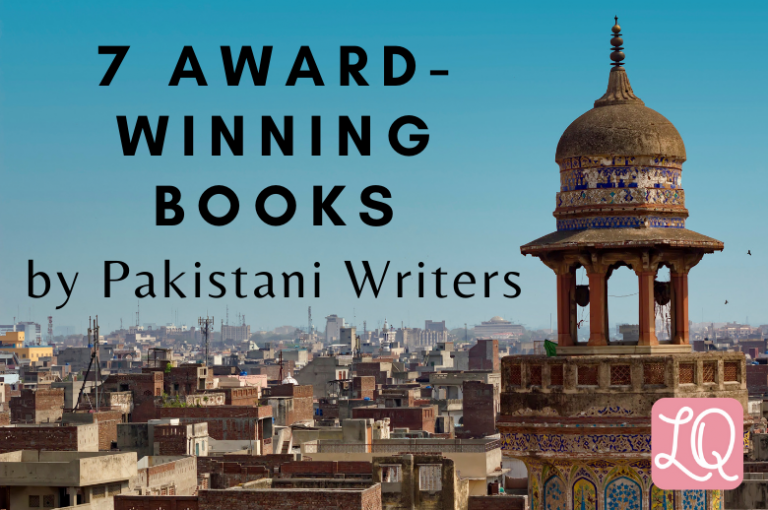 The following is a guest post, written for Literary Quicksand by Sonia Ahmed. Find her bio beneath the article.

Pakistan is a land blessed with world-class writers, who, with their cultural diversity and English language’s vibrancy, portrayed their nation’s mindsets and spirits.

Despite frequent political disruptions and economic destabilization, contemporary Pakistani writers have produced many exemplary literary works and earned the spotlight for their stylistic influence in the English language.

Many notable Pakistani authors have won accolades for their epic themes, exploration of ethics and morality, lucid style, and post-narrative techniques. Here are the top 7 award-winning books by celebrated Pakistani authors that have greatly influenced international readership and received significant appreciation worldwide.

The Reluctant Fundamentalist by Mohsin Hamid

Included in the ‘Crime & Conflict’ category of BBC’s 100 Novels that Shaped the World list, Mohsin Hamid’s novel The Reluctant Fundamentalist is set in the post 9/11 era.

The protagonist of the novel, Changez, faces discrimination for his religion and skin color after 9/11 in the United States.

Changez studied at Princeton University in New Jersey, maintained an excellent career, and got his dream job. From his social life to his relationships, he was a respectable citizen of America.

However, things start to fall apart after the unfortunate incident of 9/11, leaving him questioning his existence. This heinous incident proved to be a disaster for Muslims all around the world. It negatively affected their identities in the Western people’s eyes and shook their image in front of themselves.

Right after the 9/11 incident, Changez’s life takes a sharp turn, where his happiness and freedom in life dissipates forever. As a Muslim immigrant, he starts facing numerous challenges, suspicious gazes, and undisguised hostility by the locals. The incident deprives him of his love, friends, social circle, and job. The novel sheds light on the themes of love, guilt, shame, and ecstasy.

The only survival instinct for Changez was to portray himself as a liberal and enlightened person to associate himself with the locals. The writer has impeccably narrated the challenging lifestyle the protagonist had to adopt in response to 9/11 without having any direct or indirect involvement in the incident. He minutely depicted the crisis the protagonist suffered from and its impact on his daily life.

The truth is, Mohsin Hamid creatively crafted the pain and suffering Muslims had to bear after the incident in his novel.

My Feudal Lord by Tehmina Durrani

This novel is a masterpiece by a prominent author Tehmina Durani. Tehmina was born in an influential family in Lahore. She divorced her first husband to marry Mustafa Khar, the most influential politician from Punjab. But soon, the marriage turned into a nightmare.

Tehmina wrote this autobiographical novel about her traumatic marital life and became the voice of thousands of unprivileged women in no time.

My Feudal Lord received the French award of “Order of Arts and Letters.” The novel is an eye-opener into the bitter history of feudalism exercised by the chieftains and the tribal headmen stretching over decades.

The traditional silence of women, the dependency of their pride and dignity on the patriarchy of tribal leaders, and male chauvinism are the novel’s main highlights.

The novel has the universal theme of suppression, women’s rights violation, freedom of speech, and ethnic mutation.

The novel became an overnight bestseller and a sensation in Pakistan and around the world. It was published by Vanguard books and has been translated into 40 languages.

I am Malala by Malala Yousafzai

I am Malala is an incredible book, an autobiography of a girl who defied death and baseless traditions and became the voice of ever-silenced children, particularly the girls of her town.

The book sold more than 1.8 million copies and received the 2013 Specsavers National Book Award, Popular Non-Fiction Book of the Year 2013, and Goodreads Choice Award for the Best Memoir & Autobiography.

The book narrates her early life, chronicles her dreams, hardships, and dangers faced by her, and the rise and fall of the Taliban in Swat Valley. It also describes the brutal assassination attempt made against Malala, a mere child at that time, just because she wouldn’t give up education.

This terrible incident couldn’t discourage her one bit. Instead, Malala became a voice for the girls’ right to education on a global level.

Nadeem Aslam is one of the finest fiction writers from the Pakistani diaspora. He is currently the only writer from South Asia whose literary style is comparable to Chinua Achebe and Chimamanda Ngozi Adichie.

His novel Maps for the Lost Lovers received the Encore Award, Kiriyama Prize, and was long-listed for the Man Booker Prize.

This dense and dark tapestry is about the honor-killing of two unmarried lovers, Jugnu and Chanda. The story is narrated by Shamas, a failed poet and Jugnu’s brother. The novel leaves the readers exhausted and dizzy.

Maps for Lost Lovers is indeed a pastoral novel that explores many social and cultural issues within the Muslim communities. Aslam gets into the psyche of a Pakistani immigrant family residing in London and compares traditional Islamic values with western norms.

Does a religion block the power of reasoning? A question the authors ask throughout the book and let his readers decide for themselves.

The novel is intriguing for its emotional and sensual appeal and shows the fragile morals of modern man and their cultural conflicts.

In Other Rooms, Other Wonders by Daniyal Mueenuddin

The novel In Other Rooms, Other Wonders highlights the eternal themes of life, class, culture, power, and desire. It explores a mental rivalry among the overlapping worlds of elite and middle-class society in Pakistan.

Though living in America, Mueenuddin has successfully investigated every intrinsic detail of Punjab’s rural life, its feudal land-based system, tragedies of the class system, the prevailing patriarchy, and whatnot?

These eight loosely interconnected stories about family, money, and power are insightful about the vivid yet sympathetic and divided society of rural Punjab.

The stories revolve around KK Harouni, a retired civil servant and patriarchal landlord, who is always surrounded by his employees, gardener, electrician, and cook, rather than his family.

The servants seem loyal to their landlord, but inside they are desperate for his death as it will change their fortune and low lifestyle forever.

Included in the ‘Politics, Power & Protest‘ category of BBC’s 100 Novels that Shaped the World list, Home Fire is one of the finest novels by prominent author Kamila Shamsie. It received the Women’s Prize for Fiction 2018, London Hellenic Prize, and was nominated for the Costa Best Novel Award.

The novel was also longlisted for the Man Booker Prize 2017 and is considered the recreation of Sophocles’s play, Antigone, set in the contemporary setting.

Through the novel, Shamsie has brought out personal and political deprivation and expressed the hatred, rejection, marginalization, and xenophobia against Muslim immigrants in England.

Isma’s sustained interrogation at the airport and questions like ‘’Cancer or Islam – which is the greater affliction?’ ultimately set the novel’s flow. It explores the present-day dilemma and clash between society, family, and modern faith.

The novel is a struggle story of Pasha’s family members Isma, Aneeka, and Parvaiz, to claim their identities as civilized citizens who are ultimately thwarted and let down by people around them.

Partly, Home Fire deals with the themes of immigration, jihad, and personal sacrifice. As for Isma, the eldest of Pasha’s siblings, she sacrifices her dreams and ambitions for her siblings’ well-being.

Bapsi Sidhwa is celebrated as the most successful international author from Pakistan. Her best-selling novels include The Crow Eaters, Ice Candy Man,  American Brat, Water, and The Bride.

She highlights the issues due to immigration, Indo-Pak partition, social idiosyncrasies, geographical displacement, and the theme of marriage.

Ice Candy Man is one of her finest masterpieces, highlighting the most horrible transitional period in the subcontinent’s history. The novel was listed in BBC’s list of 100 Novels that Shaped our World.

The inevitable partitional phase of India, political and social upheavals, and the horrors of communal atrocities are the main spotlight of the novel presented through the unbiased views of a young Parsee girl, Lenny. Ice Candy Man gives the readers a unique experience about how each individual was affected by the massacre during the partition.

How does it feel, the hand that had cut your skin and sliced your limbs was unsurprisingly your own?

This book is a nearly nonfictional and unbiased narration of partition when the aggressors and exploiters were from the same communities that faced mass violence, rapes, and dismemberments.

This book serves as a mirror to the readers. It foreshadows all the chaos, violence, and destruction that the communities from Pakistan and India suffered during the partition.

Reading literature from different countries connects people, gives multiple perspectives on universal themes, and broadens your horizons. These award-winning books will surely give you a better insight into the culture, traditions, and values of Pakistan and its people.

Sonia is a short story writer and editor of Penslips Magazine. She is an avid reader and loves a good story that inspires readers and challenges their core beliefs. A dreamer at heart, she writes tales of the ordinary people of the society and believes every story is worth telling. She also writes non-fiction on subjects ranging from eco-friendly lifestyle to religion, science, and healthy living.

I’ve read The Reluctant Fundamentalist and I Am Malala. And I’ve read Cracking India by Bapsi Sidwa. I want to read a couple of others on the list.