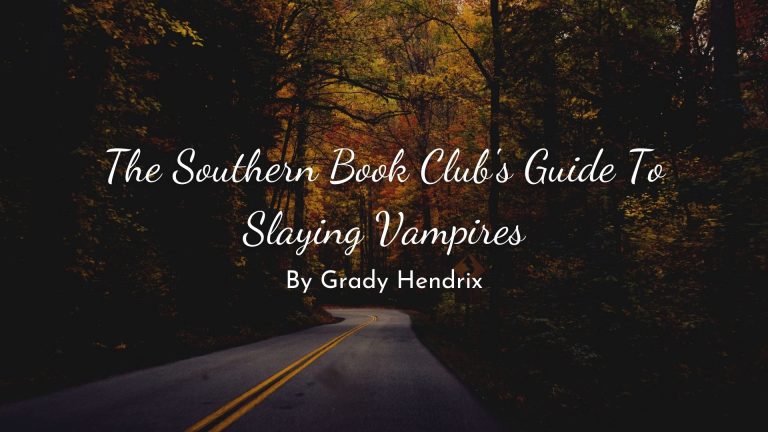 A friend bought me a copy of this book when she got hers so we could read it together. We were so excited to read it! The title promises an interesting story, and general reviews rate The Southern Book Club’s Guide To Slaying Vampires at about four out of five stars. Unfortunately, I found that this book doesn’t live up to its title or any of the hype.

Patricia Campbell leads a boring, thankless life as a housewife in a little southern suburb. She misses her nursing job, and most of her time goes to caring for Miss Mary, her senile mother-in-law, her emotionally absent husband Carter, and her two children, Korey and Blue. The one thing that brings her true happiness is her small true-crime book club, made up of other housewives: Kitty Scruggs, Slick Paley, Maryellen, and Grace Cavenaugh. The book club allows them to entertain sordid stories and escape their domestic lives for a little while.

However, Patricia’s life—and their book club—soon get disrupted by the arrival of a newcomer, James Harris. His great-aunt, notoriously grumpy local Ann Savage, attacks Patricia in the middle of the night, chewing her ear off. Mrs. Savage dies not long after, and James quickly settles into her home. Patricia suspects that James is harming poor black children in nearby Six Mile thanks to a tip from Mrs. Greene—Miss Mary’s part-time caretaker—and presents her evidence to the book club, but their husbands intervene and force them to apologize to James. They infiltrate the book club and start controlling that, too.

Three years later, Miss Mary’s ghost tells Patricia about James’ nighttime activities, and that she should go see Mrs. Greene, who’s furious at the book club ladies for abandoning the kids in her neighborhood to their grim fate. Patricia eventually convinces the other women to help them again, especially now that Slick is dying from an ‘autoimmune disease’ since James raped her. While their husbands are distracted, they finally manage to confront James and put an end to his gruesome activities, which gives Patricia the courage to divorce Carter.

While I enjoyed the first third of this book, the last two left me disappointed. After the book club forms and Patricia gets attacked, most of the other women spend a lot of time doubting her suspicions and evidence against James, even when she goes with the realistic accusation that he might be dealing drugs. They have little to no camaraderie, and Mrs. Greene isn’t even a part of the book club, she just happens to work for the Campbells. Instead of slaying vampires at night and reading books by day, these women are gaslit by their husbands into ignoring the singular vampire in their presence for three years.

Not only is the title misleading, the characters aren’t very likable, especially once Carter graduates from being emotionally absent to emotionally abusive. He practically forces Patricia to take Prozac and convinces their kids that she’s crazy. He tries to convince her of the same. None of the other women have remotely kind husbands, either, and they all put up with their unhappiness because—they have to save face. They choose to cling to their unhappy lives in order to stop embarrassing their husbands in front of James, their new investor friend.

These women aren’t particularly brave or clever. They don’t stand up to their husbands or operate within the limits of their domestic lives to act behind their backs. Even Grace, the only woman who appears to have any sort of backbone, gets forced into submission via physical abuse. She’s also the only one who claims to be happy as a housewife, but it’s hard to tell if that’s true or a trauma response. Patricia doesn’t summon the courage to divorce Carter until James gets dispatched, and even then, she’s incapacitated from James’ bite during the fight. Their whole plan involves using her as bait—no one objects to this.

Slick also suffers from sexual abuse at James’ hands, which eventually kills her and nearly spawns another vampire. I spent the last two-thirds of this book feeling furious at all of the male characters for what they put the women through, but the women also don’t care about the vampiric threat until Slick’s dying and Patricia’s children are in danger.

What about all of the poor black children that died before and after the time skip? Mrs. Greene cares about them, but that’s it. Lots of racist and sexist things occur in this book, but the main characters let the racism happen and suffer from the sexism at every turn. This book could have been an excellent commentary on both things with cool female characters, but Mrs. Greene is the closest thing we have. If she was the main character, the story could unfold in a more satisfying and compelling way that befits the title.

There’s also a lot of gore and gross detail in this book that substitutes for suspense. Patricia first loses an ear, and we’re treated to a scene where she’s hiding from James, and a cockroach forces itself into her remaining ear. Without the cockroach, the scene could have been suspenseful, especially since Patricia’s read several vampire books at this point, but she isn’t entirely sure how James’ powers work. Can he hear her heartbeat? Is he simply toying with her? These fears would have kept me hanging onto every word, but instead, I wanted to put the book down.

I’m giving this book 1.5 stars for a promising start and an unsatisfying ending, but maybe it just wasn’t for me, especially since a lot of people have praised it. Have you read any of Grady Hendrix’s works? What did you think?

I also found the book lacking; I hated the “plot twist” of the husbands coming to listen to the wives talk instead of the detectives. As a Reader i was so excited for the wives to get rejected by the detectives and then start their own vampire slaying group. I also think there was no reason beyond gross-out factor for the author to make the vampire so disgusting and perverted. It’s bad enough the vampire prefers to feed on children, but I can get behind that. There was no reason to bring in the child SA, especially without warning the reader in advance. I felt a lot of the details were just thrown in there to be gross and none of it helped with suspense.

Thank you! I thought I was the only one who was absolutely disgusted by how much this book glorifies domestic abuse, gas lighting/ manipulation, and misogyny. To make it even worse, the characters are completely one dimensional.

Oh man you guys don’t understand this book at all lol. Some of that comes down to subjectivity I suppose. I find the “gross gore” an acute part of this book can be so unnerving. I love it. One comment here says the book glorified misogyny and gaslighting etc. No … No it doesn’t. The misogyny is the horror. The system these women find themselves trapped in is part of what’s so terrifying and what makes the protagonists journey so difficult. The main reviewer thinks we should just cut to Mrs Green so that, what, we get some kind of power trip novel with a kickass female lead who takes no prisoners? I love Mrs green. But her story would be the same as Patricia’s ultimately as her cries for help fall on deaf ears due to racism and people’s fear of risking their lifestyles. What exactly is so bad about a story about a woman caught up in the trap of 1990s sexism and trying to figure out how to survive it and operate in it without losing her mind? I find it absurd that Google would list this as one of their 3 highlighted reviews for the book. The other two are aggravated, this one is just one person’s realization that she wanted to read a book about generic vampire slayers

Hi! We appreciate your difference of opinion. Although I personally haven’t read the book, your review sounds super legit! The internet is the best place for differing opinions, right? As far as Google choosing our site to highlight, I have no idea why, either. Pretty cool though, right, that a little ol’ book blog can compete with the big guys?

Yup! A hallmark of suburban horror, which this book nails. Hendrix grew up in Charleston in the 90s – this is an excellent representation of reality and the horrors women faced in “polite society.” The “stranger comes to town” trope allows a gradual subversion and eventual resistance by shining a light on the true horrors of the social systems in place. I found it to be a brilliant convergence of many horror genre aspects – and a refreshing take on modern vampire mythology.

[…] In The Southern Bookclub’s Guide to Slaying Vampires, these mothers’ worst worries are completely true as their true crime book club becomes the headquarters for outing the new man in town—who just happens to be a vampire with a taste for children. But I’ve said too much! Read this book for yourself, and you’ll find one of the quirkiest horror novels on the shelves today.[3] […]