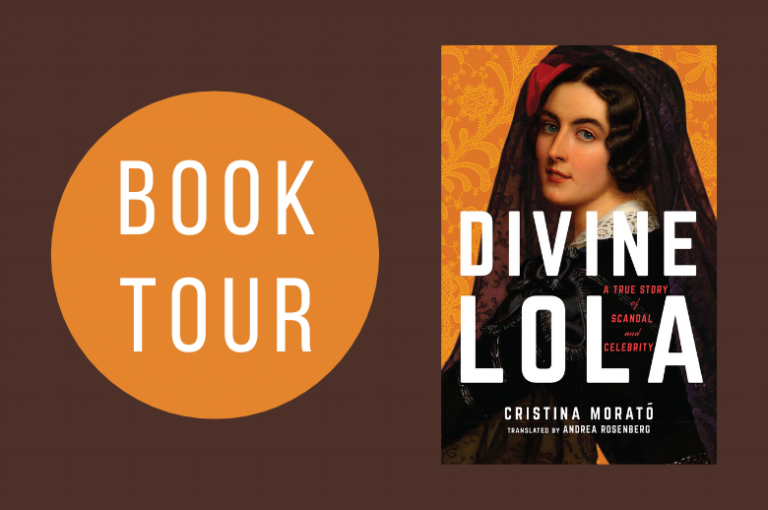 Welcome to the Divine Lola: A True Story of Scandal and Celebrity by Cristina Morató, translated by Andrea Rosenberg book tour! I’m happy to be a part of the tour for this captivating historical-fiction-style biography. Check out my review below!

An enthralling biography about one of the most intriguing women of the Victorian age: the first self-invented international social celebrity.

Lola Montez was one of the most celebrated and notorious women of the nineteenth century. A raven-haired Andalusian who performed her scandalous “Spider Dance” in the greatest performance halls across Europe, she dazzled and beguiled all who met her with her astonishing beauty, sexuality, and shocking disregard for propriety. But Lola was an impostor, a self-invention. Born Eliza Gilbert, the beautiful Irish wild child escaped a stifling marriage and reimagined herself as Lola the Sevillian flamenco dancer and noblewoman, choosing a life of adventure, fame, sex, and scandal rather than submitting to the strictures of her era.

Lola cast her spell on the European aristocracy and the most famous intellectuals and artists of the time, including Alexandre Dumas, Franz Liszt, and George Sand, and became the obsession of King Ludwig I of Bavaria. She then set out for the New World, arriving in San Francisco at the height of the gold rush, where she lived like a pioneer and performed for rowdy miners before making her way to New York. There, her inevitable downfall was every bit as dramatic as her rise. Yet there was one final reinvention to come for the most defiant woman of the Victorian age. A woman known as a “savage beauty” who was idolized, romanticized, vilified, truly known by no one, and a century ahead of her time.

Divine Lola is an interesting mix of historical fiction and biography. The author, Cristina Morató, has done a good job of weaving the two styles together to create a book that captures your attention. The translator, Andrea Rosenberg, has brought the story to life in digestible English that’s enjoyable to read.

I have to admit before I read Divine Lola I’d never heard of Lola Montez, and I’d definitely never heard of Eliza Gilbert (Lola’s real identity). However, she is absolutely fascinating.

Lola had a difficult relationship with her mother growing up; they were estranged for most of Lola’s life (her mother lived in India and Lola lived in England) and there’s an obvious element of rivalry between the two. After her mother’s abysmal treatment of her daughter, it’s unsurprising that Lola elopes with a much older man when she’s only 16. Unfortunately, Lola’s marriage doesn’t work out and she ends up divorced and alone. Where many might have thrown in the towel at this point, Lola decides to reinvent herself as a dancer from Seville. Her journey from that point is bumpy to say the least­! She travels around Europe looking to dance in various theatres and operas. And manages to upset quite a few notable people as she does so.

I enjoyed Morató’s approach to this book because she didn’t just focus on Lola’s romantic life, but on Lola as a person. We find out her likes, dislikes, thoughts, what makes her tick. The book gives a huge amount of detail about seemingly unimportant facts, but when you put them all together you get a clearer idea of why Eliza Gilbert became Lola Montez. The way that the author has portrayed Lola isn’t favourable, but I appreciate this honesty. To be a single woman during this historical period, followed by scandal and celebrity, mustn’t have been an easy feat. So, portraying her as a strong and rather ruthless character is completely appropriate. Lola is definitely not a loveable character, but she does lead an interesting life—which makes for a fascinating biography.

It’s obvious that the author has put a huge amount of research into Divine Lola. Morató provides excerpts of letters/news reports/etc. about Lola throughout. These excerpts remind you that Lola Montez was a real person, even if her story could be a plotline in Downton Abbey. I imagine the translator must have mirrored the author’s efforts in terms of research to be able to bring Lola Montez’s story to life in English.

I enjoyed this detailed and entertaining biography of a woman who kept on going, even when things weren’t going in her favour. Lola’s resilient spirit really jumps off the page, and I’m more than happy to give this book 3.5 stars.

Born in Barcelona in 1961, Cristina Morató is a journalist, reporter, and author dedicated to writing about the lives of great women innovators and explorers that history has overlooked. Her research, tracing the footsteps of these remarkable women, has led her to travel to more than forty countries and has resulted in eight biographies: Viajeras intrépidas y aventureras(Intrepid and Adventurous Women Travelers); Las Reinas de África (African Queens); Las Damas de Oriente (Ladies of the East); Cautiva en Arabia (Arabian Captive); Divas rebeldes (Rebel Divas); Reinas malditas (Tragic Queens); Diosas de Hollywood (Hollywood Goddesses); and Divina Lola (Divine Lola), Cristina’s first to be translated into English. She is a founding member and the current vice president of the Spanish Geographical Society and belongs to the Royal Geographic Society of London. For more information visit www.cristinamorato.com/home-2.

Andrea Rosenberg is a translator from Spanish and Portuguese. Her full-length translations include novels, graphic narratives, and nonfiction, including works by Manuel Vilas, Tomás González, Inês Pedrosa, Aura Xilonen, Juan Gómez Bárcena, Paco Roca, and Marcelo D’Salete. Two of her translations have won Eisner Awards, and she has been the recipient of awards and grants from the Fulbright Program, the American Literary Translators Association, and the Banff International Literary Translation Centre.

Thank you for having me, Sara. It was a fascinating read!

I enjoyed this one as well. Fascinating life!

I’m pleased you enjoyed it too! She was certainly a memorable character!