Review: The Immortals of Meluha by Amish Tripathi 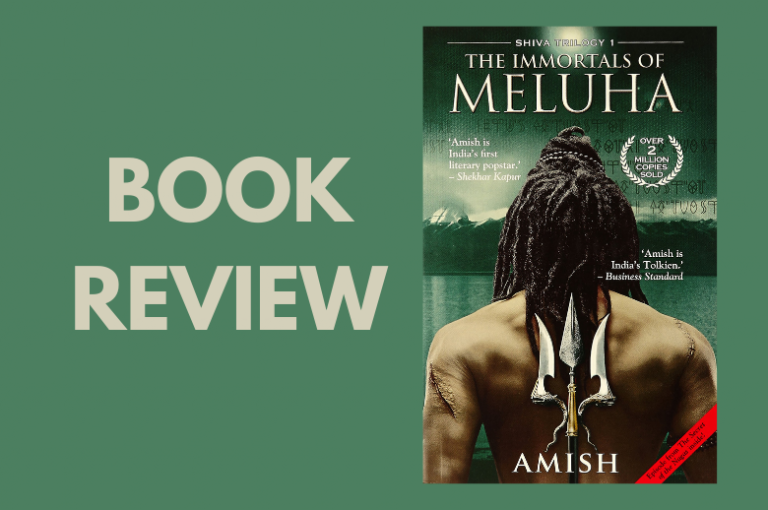 Thank you to Ashley for this awesome guest review of The Immortals of Meluha! Check out her review and find out more about her below.

The Immortals of Meluha by Amish Tripathi is the first book of the Shiva Trilogy. It surrounds the deeds and adventures of Shiva, a Tibetan Chief immigrated to the supposedly perfect society of Meluha built by Lord Ram. When he arrives to this near magical place, he becomes the center of an age old prophecy. This prophecy in states that a man with a blue throat will save them from their violent enemies, the Chandravanshis and the Nagas. Shiva is now placed under heavy responsibility and unbridled respect as he goes on to become the leader of a grand-scale war that he doesn’t know anything about.

Growing up listening to many stories surrounding Hinduism and Indian culture, it gave me motivation as an adult to look for novels such as this. A telling of grand heroes, powerful female characters, unrelenting use of magic and the constant message or lesson embedded in each tale. The Immortals of Meluha holds itself to this standard. Shiva goes through his journey learning of what it means to have the ‘perfect’ society. Along with the risks and tribulations involved in making the world a better place even though things seem fine on the surface.

The plot is no different from your average ‘chosen one’ narrative but it’s amazing how much a story can look so new if you simply change the cultural perspective. I loved seeing someone as revered as Shiva portrayed as a man who simply wanted to do what was right for the people. Except he realizes the world he’s in is a little more complicated than it looks when perfection involves hefty risks.

Most of the story follows Shiva and his constant curiosity of the new world around him. Shiva quickly became one of my favourite written male characters purely because of his dynamic energy. He encapsulates a rough-hewn man who smokes and fights harder than most soldiers. At the same time, he’s graceful and creative. It’s rare to see a male character who swings a sword like a seasoned warrior and dances like an angel in the same story.

Another character I loved is the main female lead, Princess Sati of Meluha. She’s patient and strong willed, a little rigid and a powerful fighter. I loved that Sati still stood proud in her femininity while being a tough fighter, it made her layered and interesting. Despite this talent, Sati was forced in a shunned group called the vikarma due to a miscarriage in a past marriage.

Vikarma is essentially a mark of shame placed on people who’ve suffered disabilities or women who’ve suffered miscarriages. They believe that these ailments are caused by a sin committed in a past life.

The issue of vikarma was the first thing Shiva noticed in the perfect city of Meluha and deems it unfair especially when he garners feelings for Sati. I really liked how meticulously this problem was discussed in the story. It wasn’t just Shiva trying to rescue Sati from her fate but a genuine learning curve for Shiva to figure out whether he disagrees with the vikarma or the fact that Sati is marked as one. We see Shiva learning about the nuances of this issue and finding out how to fix it for everyone rather than just the one he loves.

Their romance isn’t the central part of the story but I truly enjoyed reading both of these characters growing as people together. Sati begins to open up to new possibilities even though tradition sees her as unfit to do anything while Shiva learns patience in the face of the utmost unfairness.

Going back to the chosen one narrative, my favourite part of this book was the sheer awareness of it all. Shiva and even other side characters question the idea of placing so much trust on someone who had just immigrated to their city. We have the King who’s desperate to have a hero in their midst, giving Shiva the utmost respect. Then you also have a Commander who gives Shiva a hard time because he believes that respect needs to be earned. At the same time, Shiva is in the center struggling to help people when he doesn’t know how to do it. The way this narrative was broken down into pieces and turned into genuine character struggles so that Shiva could earn the respect of these people was so enjoyable to read.

The Immortals of Meluha goes down as one of my favourite books based on Hindu mythology. Full of twists, nuanced philosophical concepts, war, love with interesting and dynamic characters that are easy to root for. If you’re looking to read more Indian authors and epic stories regarding Hindu mythology, be sure to check this book out!

I’m a blog writer, lover of books and a recent Media graduate from Macquarie University. I created my personal blog to express my interest in stories, films and the entertainment industry as a whole. Currently, I’m living in Sydney and working on my first novel.