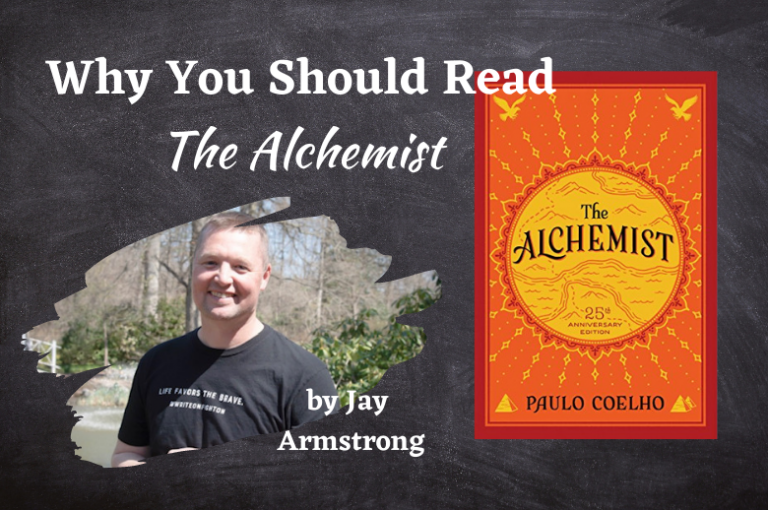 Thank you to author Jay Armstrong for sending this phenomenal reflection on The Alchemist! Meet him and read about his book at the end of this post.

If I could have a conversation with my thirty-year-old self, it would go like this:

“It’s called The Alchemist and you should read it.”

“Because you’re thirty. Because you’re foolish. Because you’re playing it safe. Because you think time is your friend. You yearn for the wrong things. You make half-hearted choices. You feel obligated to adopt people’s opinions as your truth because you desperately fear rejection. You want to live the easy life but expect rewards that require hard work. You take too much for granted. You’ve failed to understand that all choices, even the small ones, ripple with consequence. Even choosing not to choose has consequences. You should read The Alchemist because you’re going to father two more children, and you’re going to invest your money in grad school. Then you’re going to get sick, chronically ill, with a sickness that will break you physically and test you spiritually. On a cold December day, you’ll wring your hands and look into the soft eyes of your children and shut your laptop. You’ll drop out of grad school and be more lost than you’ve ever been. And it’s only then, as you wade through some of the most draining, exhausting, terrifying hours, days, weeks, months, and years that you will learn pain is necessary for growth. That your scars, those jagged stories, knitted with conflict that tattoo your limbs and your internal organs are signs, are omens from a higher power that give your life meaning and purpose.

My thirty-year old self looks down, kicks dust for a while and as if talking to his toes asks “What’s the book again?”

The silence balloons into something big and palpable between us.

Thirty-year old self turns up his eyes, offers that familiar, coy smile only found in photo albums now. He’s young and thin and clueless.

“So, this Alchemist book…,” he crosses his arms and leans his shoulders back, “…can I get the Sparknotes?”

In the preface to the anniversary edition, the author describes how The Alchemist sold only one copy in the first week. A second copy sold six months later—to the same person! Within a year, more than sixty-five million copies were sold in eighty different languages, a Guinness Record for most translated book by a living author.

The premise of The Alchemist is simple: A poor sheep herder, Santiago, decides to sell his flock to go questing across the Arabic desert for a treasure supposedly located near the pyramids of Egypt.

Of course, what he learns about himself, about life and happiness and love and truth on the journey are more valuable than any extravagant treasure he could find.

Why am I such a fan?

Because Coelho implores a very simple, parable style to tell Santiago’s story, which is essentially the story of humankind.

It’s about following your dreams.

It’s about choosing to live a life that gives your heart and soul meaning and purpose.

It’s about finding your true self, or as Coelho calls it, “Personal Legend”

Making a decision and living with the consequences is super hard.

I always thought the older and more mature I got the easier decision-making would be. Not true. In fact, I’m learning the older you get the more variables there are (money, children, health, job security), the harder decisions become.

As adults, we fear being wrong. We yearn to make the perfect decision. We foolishly think the right decision will unlock a magical unicorn life.

The Alchemist argues that we can live a good life by avoiding decision making and risk taking. We can earn money, own a house, raise a family, make friends, and host parties. We can have all the comforts of a “good life” like we see in magazine advertising. However, the “good life” will always fall short of the one we imagined for ourselves.

This “good life,” the cautious life, will always prevent us from achieving our Personal Legend.

And this “good life” will gnaw at us, dog us, press us, and leave us with a hollow heart that beats and beats and beats as we stagger through a desert life, a life that mercifully ends with our inevitable death.

The Alchemist reminds us that the easy path, the lighted and well-worn path traversed by so many souls, is the far more dangerous path than the mysterious, unblazed path.

Life is a noisy ride. Whether we’re ready for it or not, we will hear everyone’s opinions about ourselves and what we are doing with our lives. If we adopt what others think of us as our truths, we will come to hate ourselves. We will live, as American philosopher, Henry David Thoreau described, “a life of quiet desperation.”

The Alchemist‘s narrative style amplifies the book’s simple message: No matter the noise, no matter the costs—follow your destiny.

Jay Armstrong is a writer and a former award-winning high school English teacher. Despite being diagnosed with a rare neurological disease, that impairs his movement, balance, eyesight, and speech–Jay presses on. He lives in the suburbs of Philadelphia, Pennsylvania with his wife, their three kids, and their dog Maggie May. He makes dad jokes, keeps the house stocked with cereal, and will only accept a cordial invitation from Oprah to join her book club. His debut memoir, Bedtime Stories for the Living, will be released on December 3, 2021. You can visit Jay at writeonfighton.org or @writeonfighton.