What author would you want to have lunch with and why? 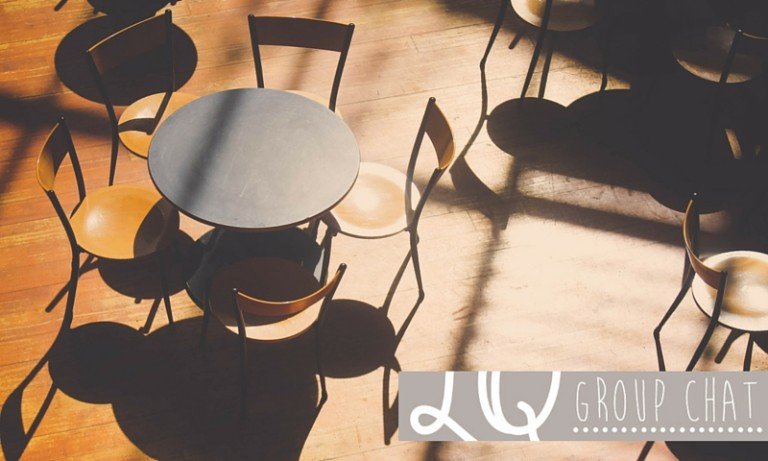 I asked my fellow LQ friends the following question: What author, living or dead, would they want to have lunch with and why?

I know, I know. It’s such a cliched question. But, I am the queen of cliched hypotheticals. I truly believe you can get a lot of insight into a person through these ridiculous questions. My habit of asking irrelevant hypothetical questions has, admittedly annoyed friends, family, and coworkers. No one takes kindly to someone abruptly asking questions like, “If you had to be reborn as something other than a human, what would it be?!” or “If you could only eat three different types of foods for the rest of your life, which would you pick?!” But, I’ve been busy on some art projects this week, my reading output is low, so I decided to annoy my fellow LQ chicks to find out which author they would most like to meet. Here are their reluctant answers:

I don’t do lunch meetings. I find them awkward and stressful, and I am terrible at furthering conversation! (Plus, who pays and how hard do you argue about it???) Putting that aside and assuming that I am the intelligent and charismatic journalist my professors hoped I would be someday, I would love to have lunch with Joanne (J.K.) Rowling, author most known for creating the Harry Potter series. Rowling, to me, is an incredible woman not only because of her writing prowess, but also because of her strong will. She is a smart, powerful woman who is firm in her beliefs (whether we each agree with all of them or not), and did not allow herself to be pigeon-holed after her rise to fame.

As it relates to her writing, I want to pick her brain on plot development. The Harry Potter series seems to me to be all things to all people. It is light enough to engage children in – gasp – reading a book, but also deep and complex enough to entertain adults. I would delve into her process for creating twists and turns in the early pages that don’t reappear until the waning chapters of later volumes. Following that would be her thoughts on so consistently managing to create a series that, while generically classified as fantasy, weaves elements of romance, mystery, and bildungsroman or coming-of-age novel. My questions on her organization of each storyline alone would take up a four course meal! Wait, is there a way to do that without sounding awkward?

After much consideration, I finally settled on having lunch with Anne LaBastille. You probably never heard of her, but her memoirs about living in the Adirondacks deeply moved me when I was a teenager. I found her book Woodswoman while browsing the nature section in Barnes & Noble. It’s about her living deep in the Adirondacks after her husband unexpectedly divorced her and told her she had to leave. In the midst of this personal pain she gathered up supplies and the help of some friendly lumberjacks to build a small cabin on Black Bear Lake. The idea of a woman taking this on—in the 60s when women were largely expected to stay at home—was so empowering to me! Plus, her passion and reverence of the ecology around her echoed Thoreau, Emerson, and Muir—nature writers she and I both loved. Anne passed away in 2011 after writing several memoirs, children’s books, research articles and books, and dedicating her life to the wellbeing of wildness. I’d give anything to visit her secluded cabin, sip some tea and discuss books, nature, and life with this incredible woman!

How is this question so difficult? It must be one of those times where my brain is just paralyzed by too many choices! I think I’m going to go with (drum roll…..) Walt Whitman.

First of all, I just think it would be amazing to meet a great poet. What was it really like to sit next to the guy? Did he chat colloquially? Was the way he talked just inherently poetic? I think I’d like to meet him later in his life, when he had a big Santa beard. At that point in his life, he had spent years and years perfecting his one main life’s work, Leaves of Grass. Can you image putting your entire life into one thing like that?

Whitman ends Leaves of Grass with “the strongest and sweetest songs yet remain to be sung.” Isn’t that gorgeous? Yes, it’s Whitnam whom I’d most enjoy having lunch with.

When I thought about this question I couldn’t come up with anything I’d want to talk to any particular author about. That’s just not something I think about. There are plenty of non-fiction authors that I’d love to chat with about their non-writing trades (i.e. Will Allen and urban farming; Aldo Leopold and phenology), but that doesn’t really seem like it counts.

So I’m going to have to go with my gut here and say Henry David Thoreau. I know the guy was known to be a bit of a crank, but I wouldn’t really want to talk to him. I thought maybe we could just take a walk together. Have a silent picnic on Walden Pond while we each lost ourselves in books, intermittently reading lines aloud to enlighten each other. Deep down I would be hoping that Mr. Emerson would happen around the corner and join us.

I think that I cannot preserve my health and spirits unless I spend four hours a day at least—and it is commonly more than that—sauntering through the woods and over the hills and fields absolutely free from all worldly engagements. – Thoreau

So…I actually have met David Sedaris. It was brief. I was ridiculously nervous. I waited in a long line after attending one of his book readings, clutching a copy of Me Talk Pretty One Day in hopes of having it signed. I got to the table that he was sitting at, and he was wonderfully pleasant and down-to-earth. The thing is, I have no idea what I said to him or what he said to me. I was so excited to meet one of my favorite authors, my mind just went blank, and suddenly I was walking away with my copy of Me Talk Pretty One Day. He hadn’t signed it, instead he drew an elf sitting in a shoe. And that definitely solidified my admiration for David Sedaris.

I was, I think, 19 when that happened. I’m older now. I would like to think I could be less of an awkward, nervous wreck if I ever met him. He can take any mundane subject and make it funny and interesting, so I would enjoy just chatting about whatever random topic came up. And honestly, I don’t think he’d care or judge if I still was that awkward, nervous wreck.

What a difficult (but fantastic) question! I think I’d have to meet with Margaret Atwood. I feel like her opinions and wit would keep the conversation flowing!

Oooh, what a fantastic choice! I know, the question is a tough one. The easier question would be: What author would you NOT want to have lunch with? (Which I am going to, for now, refrain from answering.)

J.K. Rowling would probably be on my list too, but I’m afraid I’d spend more time fangirling than actually getting to ask any of the dozens of questions I have for her, should the chance ever arise.

My pick would be Betty Smith. She only wrote four books in her lifetime, but they were amazing books. I would want to hear from her what it was like being a child in her time period because although the books are said to be at least semi-autobiographical, I’m sure there’s a lot more to her own story.

I just looked up Betty Smith…I have never read her! But I’m intrigued! Which of her books would you suggest?

I have ones for categories I read. First, David Sedaris would probably be my second choice for memoirs. I love hearing about Raleigh since I lived in that area for seven years.
Young adult: David Levithan Not only did he shape my favorite series as a child, The Baby-Sitters Club, but he also made huge strides in gay YA lit. Plus, I love his back-and-forths with Rachel Cohen.
Adult fiction: Elinor Lipman Even when I wasn’t reading much, I was always reading her books, most many times. A close second is Liane Moriarty. I love the way she portrays women in their 30s.
Memoirs is Alexandra Fuller. Any woman who has lived a full enough life by her 40s to write three memoirs is definitely worth a lunch!

I love how each of you are varied in your answers, from modern day celebs to older and revered poets. Very nice!

I think I’d want to have lunch with Amie Kaufman & Meagan Spooner. (I’m totally not cheating because they cowrote the Starbound trilogy and it’s one of my favorites ever.) I think that they’d just be the sweetest people and that they’d bounce off of each other in their conversations that I would just sit there smiling and laughing! We’d talk about anything and everything, I think.

This is difficult! I’m actually really afraid of meeting anyone I admire, authors included. But if there was someone I would like to meet Leigh Bardugo, if only to chat endlessly about the Darkling and Six of Crows. She’s not SO huge of an author that I would feel overwhelmed and she seems genuinely pleasant. Also she had lunch with Kit Harrington once and so maybe she would invite him? And I’m a bit obsessed with the lit agency she’s with so we could chat about that too.

Haha! I know exactly what you mean…the intimidation factor would be really hard to get over. LOL I’m sure she’d have to bring Kit along 😀

[…] in our “if you could have lunch with any author” post when I said I’d want to meet Walt Whitman? Well, this makes me love my choice even more. […]