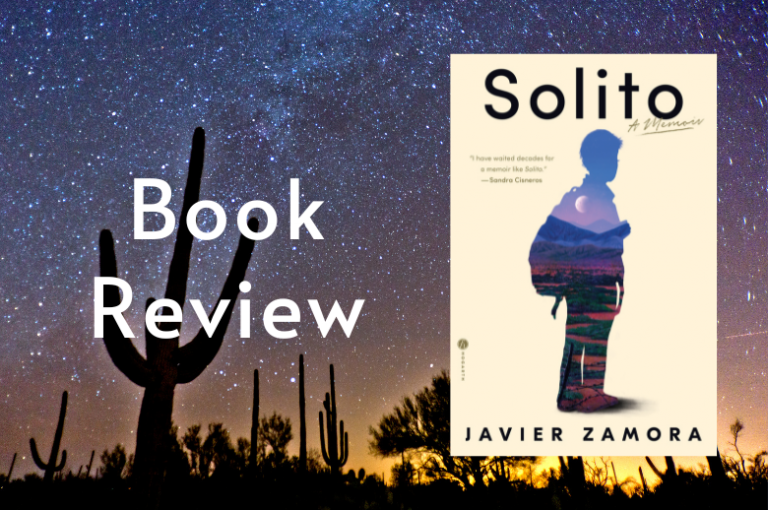 What an amazing story of resilience, strength, and love. I couldn’t put this memoir down and, at times, couldn’t believe it wasn’t fictional. Read on for my review of Solito.

Trip. My parents started using that word about a year ago–“one day, you’ll take a trip to be with us. Like an adventure.”

Javier’s adventure is a three-thousand-mile journey from his small town in El Salvador, through Guatemala and Mexico, and across the U.S. border. He will leave behind his beloved aunt and grandparents to reunite with a mother who left four years ago and a father he barely remembers. Traveling alone except for a group of strangers and a coyote hired to lead them to safety, Javier’s trip is supposed to last two short weeks.

At nine years old, all Javier can imagine is rushing into his parents’ arms, snuggling in bed between them, living under the same roof again. He does not see the perilous boat trips, relentless desert treks, pointed guns, arrests and deceptions that await him; nor can he know that those two weeks will expand into two life-altering months alongside a group of strangers who will come to encircle him like an unexpected family.

A memoir by an acclaimed poet that reads like a novel, Solito not only provides an immediate and intimate account of a treacherous and near-impossible journey, but also the miraculous kindness and love delivered at the most unexpected moments. Solito is Javier’s story, but it’s also the story of millions of others who had no choice but to leave home.

This book is incredible. Before I even get into any of my review: this is an important memoir, it’s impeccably well written, and I so highly suggest putting it on your radar if reading about a child migrant’s perilous journey all the way from El Salvador to La USA intrigues you.

So first of all, thanks to NetGalley and Hogarth Press for putting Solito in my email inbox, and approving me to read and review it. I knew instantly that this was a must-read when I read that super compelling summary. So glad I jumped on it.

In the beginning of Solito, we get to know Javier as he is in the time between when both his parents have migrated to the USA, and he’s still in El Salvador. He lived a normal kid life in El Salvador, besides his parents being gone. He went to school, he helped his grandmother and grandfather, and he spent a lot of time with his aunt, Mali. I loved his relationship with her and I’m so glad it was included in the book, so the reader can really get to know him before his “trip”. They snuggle to sleep and are just so loving.

When it’s finally time for Javier to make the journey to his parents, he has to just leave school without even saying goodbye to his friends. Nobody can know what he plans to do. How hard would that have to be for a 9-year-old? I’m sure it was just so difficult.

The first bit of Javier’s journey, he gets to take a bus up through Guatemala with his grandpa. His relationship with his grandpa was not very deep before the trip, but they end up growing so close as they spend hours taking multiple busses through Guatemala. Their goodbye was rather heartbreaking, and the way Javier describes the love that grew between them was just beautiful. His grandfather can only go to the Mexican border, then has to leave Javier in the care of others (and a coyote who will lead them all the way through Mexico) and return to El Salvador.

Just imagine that. You’re on a journey that’s perilous, but you don’t really know what might happen, or even what could happen. At 9 years old, you’re just going along and hoping for the best, and that’s really what Javier ends up doing. He relies a lot on the group he ends up travelling with, and they end up growing very close, like a family, as they try to make it across the border.

When Javier has to cross the desert on foot…these scenes are difficult to read, and I’m sure were incredibly difficult for Javier to write and recount. He does mention in his author note having help from his therapist to access and revisit all those feelings, and I can see why. He walked for HOURS and so many miles across the desert, only to be captured by border patrol. And then? He does it all over again.

You can tell Javier is a poet, as he writes so much about the scenes, smells, and textures associated with his time in the desert. The way he names the different types of cacti to give himself something to do, something concrete to take note of, is amazing. He was NINE. And through the whole ordeal, the love that grows between him and his fake family is just…oh my heart. So good.

Overall, this book reads like an epic adventure. It was so, so good. The ONLY, only thing I will nitpick is that there’s a lot of untranslated Spanish. I spent a lot of time on my phone on Google Translate so I could get their jokes and figure out what they were talking about. As I got further through the book, I stopped doing that as much and just took in the context, but it would have been nice to have more of that translated.

Translation aside, this memoir is most definitely a 5-star read. I absolutely loved Solito.