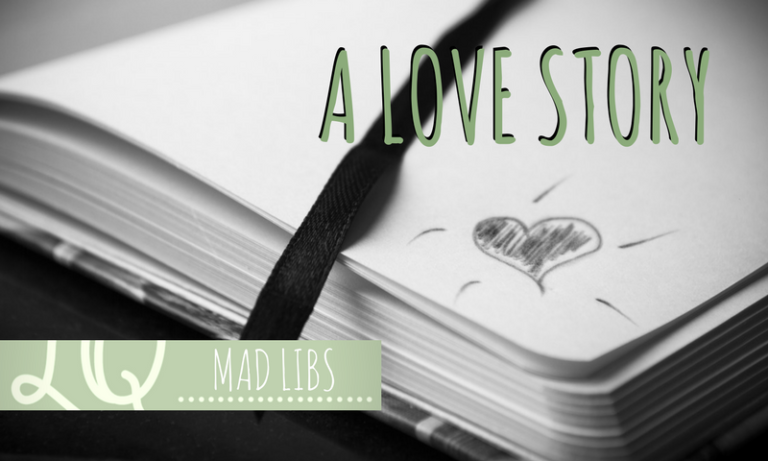 In honor of Valentine’s Day, our LQ Contributors have created a special treat: the first of (hopefully) many, Mad Lib style short stories. For this love story installment, each of our gals wrote a piece of the anecdote without knowing anything about what the others were writing! Caleigh and Amber developed our characters. Janna and Aubrey told us their story. Joli crafted the ending and then Becky tied it all together. We hope you enjoy!

Cybil Harrington had always been a plain girl. Really, you could call her a wallflower. At 24 years of age, she had snuck through the difficulties of middle school and high school unscathed, blended in the crowds of college, and had landed herself a job working as a faceless accountant for a massive multi-national. And it wasn’t like this was a bad thing.

Cybil owned a cute, typical brick war-time house in a cute, typical suburb just outside of Wilmington, Delaware. Which, as far as she could tell, was the most cute, typical city in America. She had a beautiful golden retriever called Mindy, and a quiet life was what she had always wanted.

Tucking a mousy brown lock of hair behind her ear, Cybil looked up from her computer as a co-worker brushed quietly past her cubicle. She checked her notes for the next appointment and decided she had time for a quick lunch. She pulled her usual sandwich, a BLT on whole wheat bread, from the brown bag she brought every day, and took a bite.

Nothing if not practical; Cybil used her lunchtime to flip through personal emails, take a quick read of today’s news, and then covertly checked her latest guilty pleasure: her Match.com dating profile. There were two new messages, but one of them was a garbage message from someone who clearly was not particularly interested in putting any effort into discussion. Cybil couldn’t understand why people these days didn’t actually TRY to talk to others. As far as she could see, the talking part was the most fun. The actual meeting part, now THAT was the tricky part. Cybil was great in crowds – those were easy! Slipping through without anyone noticing was seamless, and she could get great views at events and overhear any kind of conversation she wanted to. But being in the limelight? No sir…. That was not for her.

But the other message…. Now that was something.

The picture was a bit blurry, but the profile looked normal enough.  It read:

Sam Gold – flight attendant that lives for exploring new places and adventure. Born and raised in a small town in Illinois, now lives in Chicago with a roommate. Lately, life hasn’t allowed for dating because the job is always sending me across the globe, but hoping to settle down soon.

When I’m not working or traveling, I prefer to spend time volunteering at the local animal shelter and joining friends for live shows at the corner bar. Fun fact, I don’t own a car, so Ubers and walking are my main forms of transportation.

Jane Gold had smiled when she hit send on a note to the latest prospect for her grandson. Creating the Match.com profile without his knowing hadn’t been as hard has she’d thought! Other than that one furry detail she felt a little guilty leaving out… Now, she just needed to find a suitable young lady for her thoughtful, adventurous Sam. Not that she would ever admit it, but he was her favorite. Hard to compete though, when he lived down the street and visited her as often as he could to share his travel stories.

Just as she was closing the laptop, Sam Gold walked in to his grandmother’s condo. “I brought lunch, Grandma!” Jane smiled and took the Chicago-style hotdog he held out.

As they were chatting about his latest trip to South Africa over fries, Jane’s smartphone dinged and Sam picked it up. “Grandma,” he asked cautiously. “Are you on Match.com?” She blushed as she watched his eyes flit back to the message on the screen. He groaned. “What have you done?!”

Cybil was nervous. She was anxious to meet Sam, but the talking was always so much easier! They’d hit it off right away and Cybil enjoyed learning about his active life – so different from her own. After a few weeks, he mentioned he’d be flying through Philadelphia a number of times this month. Would she like to meet?

As she sat at a traffic light, Cybil wondered how she ever had the nerve to say “yes,” not only to meeting, but to suggesting they do so during a pub crawl with her friends. And not just any pub crawl. A zombie pub crawl. Her stomach churned. This was way outside her comfort zone.

“What’s your costume?” she said.
“I’m a zombie,” he said.
“Yeah, I know, but what kind of zombie?”
“Uhh, just a regular one?”
The two compared their less than creative costumes as they meandered their way through the crowd to her group of friends. As she approached, her friends raised their eyebrows.
“Oh he’s fine. He’s just a regular zombie!”

The two tried to talk, but the music kept getting louder so they took their conversation outside. They started walking and got so caught up that they didn’t notice they’d walked to a different part of town…one that wasn’t participating in the zombie takeover.

“Want to get another drink,” Sam asked?
“I don’t want to go in there dressed like this. Everyone’s already staring!”
But, he convinced her to go in, despite the stares. That one drink lasted two more hours when she decided she wanted to see him again.
“So, I’d love to see what you look like without all the blood sometime. Will I find just a regular guy underneath all that?”
“Hah! I’d like to think I’m a little more interesting than that, but yeah, just a regular guy. And I’d like that. Dinner or something during my layover next week?”

They left the bar and meant to part ways, but everyone kept staring at them. Eventually, they started moaning and dragging their legs, full embracing the zombie in both of them. And that’s when she knew she wanted to see him before next week. So she invited him over the next day, after they’d showered the blood off and returned to using words besides “braaaaaaaains” and “erghhhhh”. To her delight, he was just a regular guy.

Alas, not all went according to plan for the two lovebirds. But after all, no true romance would be complete without a seemingly insurmountable hardship.

Shortly after their Philadelphia rendezvous, Sam and Cybil realized they had very different interests when it came to the animals they loved. She loved dogs, while he was a crazy cat man. Cybil wasn’t quite sure what to do — how could she love someone who owned 37 cats! How would Mindy react?! How was this NOT on his profile?!?!

Sam and Cybil decided they needed to organize a meeting between their pets to see if this relationship could truly work out. For both of them, their pets’ happiness came above all else. Sam packed his 37 cats in 37 separate cat carriers into his grandmother’s car, while Cybil loaded Mindy the retriever, into her neon green Smart car.

Both the humans were pretty stressed, as they really did like each other and hoped their pets did too. Luckily, when they arrived at the park in Thornville, Ohio where they had agreed to meet, the cats ran up to greet Mindy. Mindy, in turn, played gleefully with the cats, letting them bat her on the head and steal her toys. It looked like the lovers could move forward together, after all. Luckily, Cybil had already set up an interview with a bank in Chicago.

As sunset approached, Sam and Cybil decide to go for a walk along the lake. They begin strolling hand-in-hand down the lane, every once in a while glancing at each other and exchanging flirty smiles. They come upon a quaint bench just outside of Lakeshore Park and sat, taking in the view.

As the sky faded from blue to orange to red, the lovers embraced each other, trying to keep the chilly air at bay for just a few more stolen moments.

“Is this how it ends? Happily ever after?” Cybil asks inquisitively, catching her lover’s eyes with her own deep blues.

This is amazing! Much fun, ladies :D.