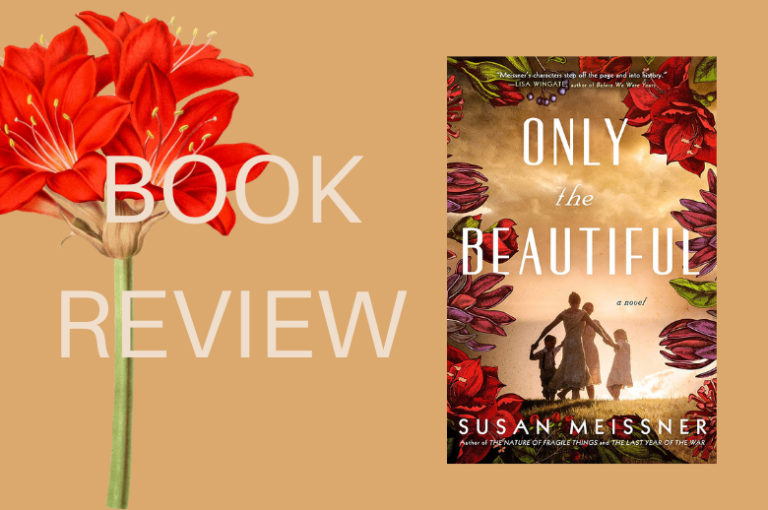 Do you have any authors who’ve been on your to-read list for YEARS? You know their books are a great fit for you, but somehow you’ve just never gotten to them? One of those authors for me is Susan Meissner. I’ve even owned one of her books about since it came out FIVE YEARS ago. The life of a book blogger/busy mom/owner of too many books, I guess 😅.

Anyway, I finally, fiiiiinalllyyyy managed to pick up a book by Susan Meissner – the forthcoming Only the Beautiful. I’m happy to report I’m just as in love with Meissner as I thought I’d be, and now need to read much, much more of her!

California, 1938—When she loses her parents in an accident, sixteen-year-old Rosanne is taken in by the owners of the vineyard where she has lived her whole life as the vinedresser’s daughter. She moves into Celine and Truman Calvert’s spacious house with a secret, however—Rosie sees colors when she hears sound. She promised her mother she’d never reveal her little-understood ability to anyone, but the weight of her isolation and grief prove too much for her. Driven by her loneliness she not only breaks the vow to her mother, but in a desperate moment lets down her guard and ends up pregnant. Banished by the Calverts, Rosanne believes she is bound for a home for unwed mothers, and having lost her family she treasures her pregnancy as the chance for a future one. But she soon finds out she is not going to a home of any kind, but to a place far worse than anything she could have imagined.

Austria, 1947—After witnessing firsthand Adolf Hitler’s brutal pursuit of hereditary purity—especially with regard to “different children”—Helen Calvert, Truman’s sister, is ready to return to America for good. But when she arrives at her brother’s peaceful vineyard after decades working abroad, she is shocked to learn what really happened nine years earlier to the vinedresser’s daughter, a girl whom Helen had long ago befriended. In her determination to find Rosanne, Helen discovers that while the war had been won in Europe, there are still terrifying battles to be fought at home.

A quick story – I like going on Reddit to the Suggest Me a Book subreddit and not only championing some great ones, but also scrolling through lists for new surprises. The other day, I came upon a post asking for “books that made you feel pangs of warm compassion for the characters”. As I scrolled through my list of books read in the past year, I couldn’t help but immediately think of the one I’d just read – Only the Beautiful.

Especially if you’re a woman, you will identify with and “feel pangs of warm compassion” for Rosie. What happens to her in this story is just one of the shortest hands a person could possibly be dealt, Yet, even in so much darkness, her motherhood creates a sense of “this is what I must do, so I will do it and I will do it well” for her child. She’s locked in an institution, stripped of her child, and then stripped of an even more basic human right (which I won’t be spoiling here).

Even though they’re not blood family, Rosie is linked across an ocean to Helen, who is such a bright light throughout this book. Some pretty terrible things happen to her too, but there’s a lot of hope on her side as well.

The stories of these two women, linked through circumstances neither of them even really know about the other, go on side-by-side throughout much of the book. Although it was definitely a sorrowful story at times, there was enough hope and anticipation to keep me out of the dumps. I LOVE an author that can do grief and sorrow and make me feel it, but give me enough hope and brightness to enjoy it. Meissner has no difficulties doing that.

Every time I feel like I’ve discovered all the awful things about the Nazis, something else comes up that leaves me with so many questions about how humans are capable of acting in such a way. In this book, it’s their praying on neurodivergent people – specifically children. Sure, I’ve heard about how this happened, but I haven’t read a story like this that has brought it to light so well. It’s all just so savage.

I fell like I’ve said a lot of things about the grief and sorrow and difficulties in this book, but really there’s a lot of positive, too. I just don’t want to go into it all too much for fear of spoiling it! Overall I really enjoyed this book and can’t wait to read more of Meissner’s books. 4.5 stars!