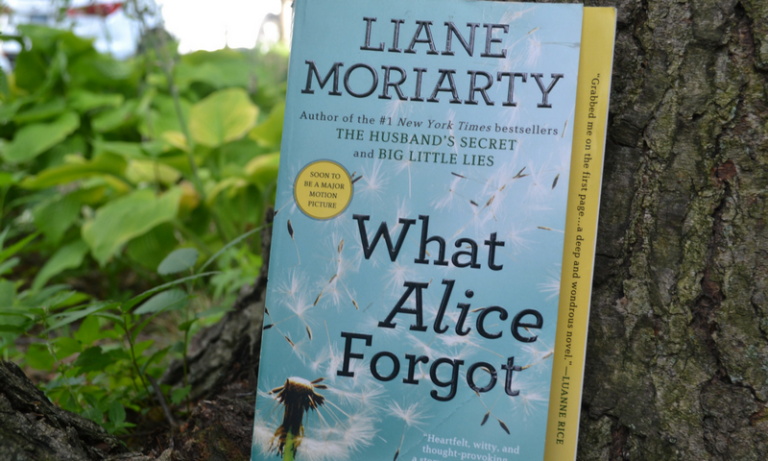 What Alice Forgot was my first Liane Moriarty novel, but it definitely won’t be my last! Alice wakes up after hitting her head at the gym and has forgotten the last 10 years of her life. She doesn’t remember her three children or that she’s divorcing her husband, Nick. Alice walks through a week of her life trying to put the pieces of her memory back together. Why won’t her sweet old neighbor answer her wave in the backyard? How in the world did her mother and Nick’s father end up married? Who is Gina and why does everyone go silent when her name is mentioned?

Moriarty really seems to get what your 30s as woman might feel like, which often gets categorized as “chick lit.” I generally dislike this term. I’ve never understood the need to distinguish regular literature from literature that women enjoy. Hello, we make up 50% of the population and we just plain ol’ read more fiction than men do! But I digress. I totally get why Moriarty’s writing is considered chick lit because of the emphasis on marriage, family, and the intense expectations that come with each. I do think I would have a greater appreciation for this book if I were a tad older, married, and/or had children. Putting that aside, I totally identified with many of the characters’ struggles.

The writing, relatable characters, and the fact that the story didn’t take itself too seriously made this the perfect summer read. I took What Alice Forgot  with me on vacation and started it on the plane ride. I didn’t put it down for the two-hour flight. The pace moves pretty quickly, but Moriarty reveals Alice’s past slowly so that the reader and Alice discover the events of the last 10 years at the same time. I really enjoyed how the plot unfolded. I’m curious as to how Moriarty develops the stories in her other books since the the plotline of this one is so specific. My boyfriend’s mom recommended The Husband’s Secret so I plan to read that next.

I don’t have much to say about this one because I just plain enjoyed it! If you enjoy a good book written with wit and insightfulness about women and their everyday lives, then try one of Moriarty’s books. This might not be for you if you like a story with a more serious plotline. 4 out of 5 stars!

[…] They have a perfect view of the mountains. I spent quite a few hours out on the porch reading What Alice Forgot by Liane Moriarty and glancing up every few chapters to take in the […]

[…] Lies and in true Moriarty fashion, I’m sure it doesn’t disappoint. I’ve only read one other Moriarty book, but I really enjoyed […]