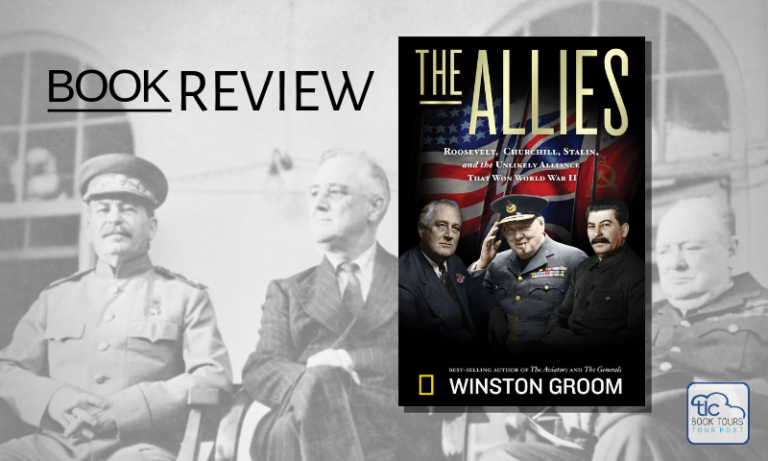 Story: The Allies by Winston Groom looks at the lives of the leaders of the three largest Allied forces of WWII. The opening chapters follow Winston Churchill’s rise through military and political ranks. Joseph Stalin is introduced as a bank robber in the next chapter which leads into his travels, full of political and otherwise scandalous escapades culminating with his rise to dictator of the USSR. Franklin Delano Roosevelt is added to the mix and described as having lived a charmed life with charisma, good looks and his share of success.  After working through the impact of WWI, particularly on Churchill, Groom begins describing the events that would bring these three men to the world stage when mere decades later, the globe was again engulfed in war. Covering each of the major theaters of WWII, The Allies shares much of what was going on behind the fronts to win the war and defeat communism through the lens of three men with very different backgrounds.

Why: For those of you new to my reviews, I am a WWII junkie. I read a ton of historical fiction and a majority of that is set during WWII. My father is also a WWII (primarily) reenactor and consumes more literature on that era than I thought humanly possible. His love for that time period certainly rubbed off on me, and this book caught my eye because I tend to read more American-based books. I knew it would be good quality or National Geographic wouldn’t publish it, and I figured I’d learn more about the other countries that helped The Allies win the war.

Opinion: I was impressed with the level of detail and connections that were provided throughout this book. Groom has captured the spirit of a biography in the context of an event, and effectively knit three lives together in one book. My expectations may have clouded my overall impressions though. While all three leaders are present, it covers Winston Churchill much more heavily. I don’t necessarily think this detracts from the quality of the book, but it wasn’t what I was expecting. On a more positive note, I was also not expecting as much personal content on each of the men, and Groom does a nice job making their histories readable – including just enough scandal to be juicy!

Recommendation: Generally speaking, this is a book for avid war historians or students seeking information on these particular leaders. The writing is dense and extremely well-researched, full of dates and names that can connect or confuse depending on your knowledge of the situations. Anyone interested in Winston Churchill in particular may find this an enjoyable title as well, but it would not be my first suggestion for Joseph Stalin or FDR.

This is SO my kind of book! I love learning more about important people in history.