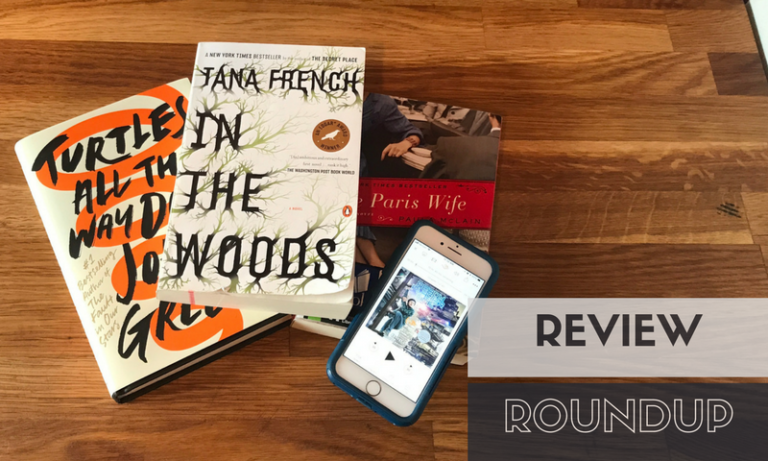 It can be difficult to write a full fledged book review for every book you read. For me, writing a short Goodreads review can be just enough. Less pressure for me, more book recommendations for you! So without further ado, here’s what I’ve been reading lately.

Turtles All the Way Down

The last time I read a John Green book I publicly sobbed on a shuttle bus to the airport. Happy to report Turtles All the Way Down did not make me sob, but it did make me think and gave me all the feels. Green never disappoints with his teenage characters—they’re smart, questioning, and maybe a bit too insightful. Unlike most adults, he doesn’t dismiss them as dramatic or shallow.

Ava, the main character, struggles with OCD and anxiety and her spiraling thoughts are captured with an intense realness. At one point, I had to put the book down because of this. I know Green wrote this with his own mental health experiences in mind and that definitely comes through. Highly recommend if you’re someone who struggles with mental health or wants to better understand what mental health feels like.

A good murder-mystery is hard to find. In the Woods by Tana French is one of the good ones! Taking place in Ireland, it’s fun to see the cultural and language differences between my American perspective. The ending will leave you feeling conflicted, in the best kind of way. My only critique would be that the book gets a littttle long, but when the pace picked up, I couldn’t put it down. Also, the main character is a bit of a tool and relatively unlikable, which is fine. You just end up wanting to throttle him a few times. Overall, this was a great read and I’ll likely pick up the next book in the series.

Ready Player One by Ernest Cline has a 4.31/5 rating on Goodreads and is being released as a major film in March. I didn’t love this and know I’ve got the unpopular opinion, and that’s fine with me. Ready Player One is super fun and nostalgic (even if it’s for an decade I never lived in) and has a really cool concept. However, I listened to this on audiobook and I don’t know if that contributed to the feeling of being mansplained to about, well, literally everything, but it felt like the main character over-explained a lot of things. I probably would have loved this a lot more if I was someone who loved video games. Regardless, I plan to see the move and look for a post on the comparison soon!

The Paris Wife by Paula McLain follows Hadley Richardson, Ernest Hemingway’s first wife, through their courtship, marriage, time in Paris and Spain, and their eventual downfall (This is not a spoiler since you can see it coming from a mile away.). Hadley’s never given any agency and ultimately this is just a story about Hemingway, framed from her perspective. I’m not a huge fan of historical fiction that tries to retell a real historical figure’s story. I’m never fully satisfied with the fictionalized version and always end up wondering what was real and what wasn’t. I did take a look at Wikipedia and the book is pretty historically accurate. I’d recommend just reading Wikipedia as it gives you the same info and is less tedious to read.