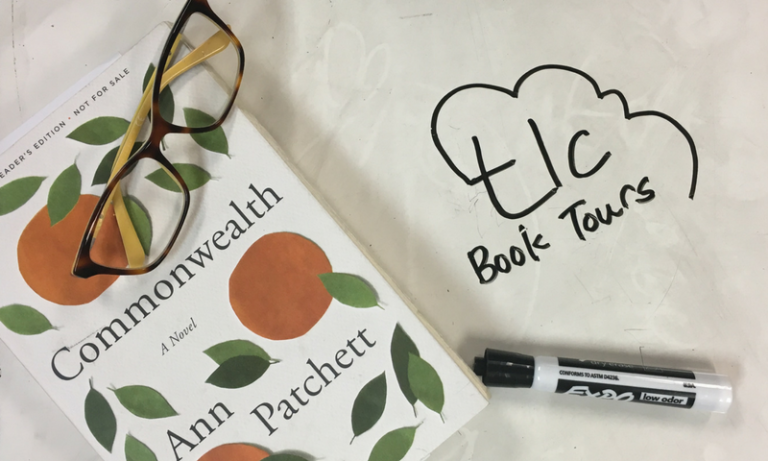 I felt the tears come thirty pages from the end of Ann Patchett’s latest novel, Commonwealth. They welled just inside my lower eyelids for the duration. When I finished the book – after a long, dreamy spell of reading – I closed it and released a breath I hadn’t realized I’d been half-holding. I cried not for any particular tragedy (Patchett doesn’t need just one touchstone to weave this epic together), but rather for an inevitable series of losses that ring true and invite connection, losses that one of her characters calls “as solid and dependable as the earth itself.”

This is one of those novels, solid and dependable and breathtaking, that I simultaneously want to keep forever and also to fling out into the world, hurling it in a “think fast” to any reader who might be similarly impacted.

The story begins at Franny Keating’s christening party. In a weird and inevitable moment, a guest at that party, Bert Cousins, kisses Franny’s mother when the two are alone in the baby’s room. So begins the entanglement of four parents and two sets of siblings that lasts more than 50 years. These relationships invite an interrogation of the meaning of family and power. Who has “full citizenship,” as Franny puts it?  Who decides?

Franny remains the lovable heart from her babyhood into her fifties. At one tipping-point moment (this is a motif in the novel – a series of either/or, before-and-after decisions), she falls in with a famous and manipulative author. Although she’s attune to the “familiar sensation of having made a real mistake” by her mid-twenties, that doesn’t keep her from making a gigantic one in telling Leo Posen the story of her family’s life.

When Posen’s resulting novel, also titled Commonwealth, becomes the National Book Award winner, the whole family must once again face their decisions – and the accompanying guilt – that have led them to themselves.

As readers we’re invited to evaluate the people they’ve become, as well. Are theirs “real” and “meaningful” lives? They ask these questions of each other, in and out of a lifetime of interactions. Towards the end of the novel, Franny’s mother, Beverly, asks her: “Do you have any ideas about the future?”

The answer Franny comes to and the one that’s suggested to all of us as interlopers in this story, is a resounding, “No.”  We have no idea. As much as you plan and intend to pass the tests of your life, you sometimes fail. Sometimes, as one character says, “the things you really need are never there when you need them.”  Sometimes, as Franny’s father reminds us, “The thing that will kill you” can’t be avoided. It’s “already on the inside.”

The truth and beauty then, comes from the small moments of connection. It’s the open arms that shoot out after “a split second of uncertainty as to whether or not there [is] good will” between us.

Bottom Line: This book is genius. It’s an honor to write about it. A big thanks to TLC Book Tours for sending me a copy to review.

Ooo love to hear about an amazing book. Adding this to my TBR list.

You inspired me to pull this one from my TBR list and finally start reading it. I just finished it yesterday, and absolutely loved it!

[…] added The Last Romantics to my TBR list as soon as I heard it was similar to Commonwealth, one of my favorite reads from […]