Audiobook Review: The Hate U Give 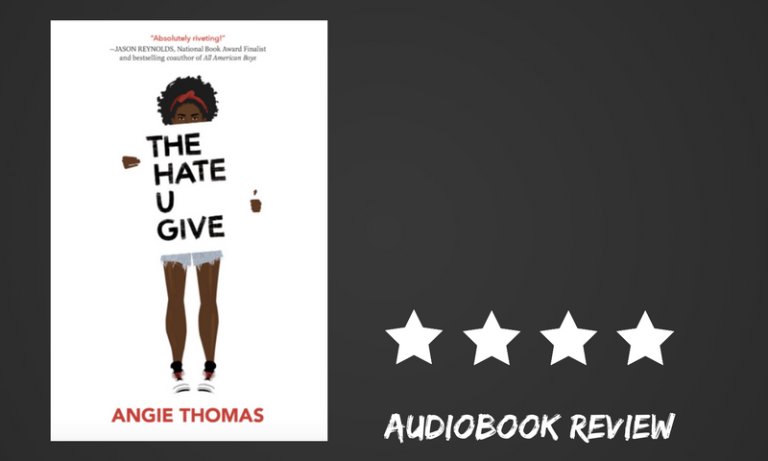 There’s considerable buzz around Angie Thomas’s debut young adult novel, The Hate U Give. The Times (UK) reviewer says that it could very well be the YA book of the decade, and The Atlantic calls it “incisive and engrossing.” This is a novel of the Black Lives Matter Movement, I’m a white teacher concerned with racial justice, and I couldn’t wait to get my hands on it.

Sixteen-year-old Starr Carter is in the passenger seat when her childhood friend Khalil is pulled over by the police officer who murders him. Suddenly, Starr’s life – already complicated by the code-switching required to fit in at Williamson, her nearly all-white private high school, and also in Garden Heights, her nearly all-black neighborhood – becomes even more difficult to navigate.

How loudly should Starr speak up for Khalil? To whom, when, and with what consequences?

Starr is an endearing, convincing first-person narrator. Most compelling to me are the passages in which Starr discusses which version of herself to be.”Williamson Starr” is careful never to use too much slang, seem “angry black,” or to give the “stank eye.” “Garden Heights Starr” is proud of her family – her father escaped gang life by serving a three-year prison sentence – works in the family grocery store, prays to “Black Jesus,” and openly discusses racial injustice.

Can Starr find a way to show – maybe merge? – both versions of herself? Does she want to?

Thomas’s narrator fosters empathy and shows white readers (like me) the moment-by-moment racial stress caused by moving in white spaces (like independent schools, where I work). She’s lovable and funny, while also honest and exacting. Thomas writes several sections that seem to be aimed at well-meaning white people who just can’t understand. Chris, Starr’s white boyfriend, stands in for those whites who want to do better, but nonetheless, keep screwing up. In addition to Starr and Chris, Thomas writes black characters who embody various viewpoints and circumstances, as well as two Williamson friends – one Asian and one white, each with their own level of racial awareness.

Thomas provides windows and mirrors throughout, and overall, this is a highly accomplished debut. I can’t wait to read more from this writer.

This narrative is well suited to audio, and Bahni Turpin is excellent. I most recently heard her read Colson Whitehead’s The Underground Railroad. The Hate U Give allows her to showcase her capacity for emotional depth, as she does in Whitehead’s novel, as well as her knack for humor and snappy dialogue. I also enjoyed hearing the black characters’ words in the voice of a black woman. Turpin plays women and men equally well.

This novel has it all. Thomas has written a timely, necessary, humanizing piece about a national crisis. And, the book is wonderfully crafted with memorable characters and tons of heart. Read it! It’s YA, yes, but it’s a great crossover for adults, as well.

[…] previous Literary Quicksand member wrote a full book review of The Hate U Give. So make sure you check out her thoughts as […]