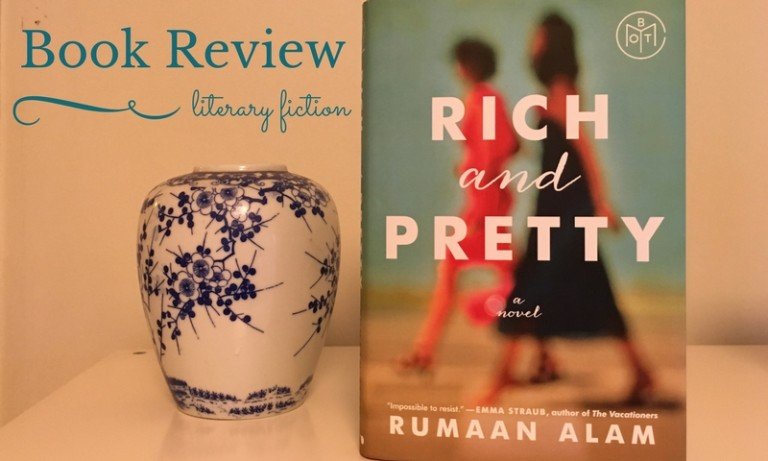 In his debut novel, Rich and Pretty, Rumaan Alam presents a curious exploration of life-long friendship. Lauren Brooks meets Sarah Thomas when they’re both eleven. It’s Lauren’s first day at a fancy New York City prep school. Her parents have scrimped and sacrificed to send her there, while Sarah’s family – her dad a diplomat and her mother a once-famous musician – have no problem writing tuition checks. The two girls become instantaneously close. “They were friends by noon,” Alam writes. “That first moment, conversation, exchange lost to time but twenty-one years later here they are still.” Indeed, their friendship becomes infused with a sense of inevitability, and Alam prompts us to wonder whether a friendship like this can survive not just the growing up, but the carrying-on that comes afterward.

At the opening of the novel, Lauren and Sarah are 32, and it’s not clear whether they even like each other. They are, however, mutually dependent, marking milestone events together with a dogged sense of tradition. “You’re my life partner,” Lauren tells Sarah, during a ritual dinner. She’s deflecting her friend’s questions about her romantic prospects. Sarah is recently engaged to “placid, efficient Dan,” and, against her full-time wedding planning (Sarah’s never really figured out what is is she wants to “do for a living”), Lauren’s left to question the relevancy of their attachment. What do they really know about each other, now that they’re long past college? What do they really have in common?

“Is this a friendship,” Lauren asks in a moment of disagreement, “or is this a force of habit?”

That’s the key question here, and both the pertinency of the wondering and the gritty realism of the leads directs the reader to consider her own failings in friendship. Neither woman in Rich and Pretty is particularly likable. Sarah proves narrow in her thinking and attached to a stifling sense of propriety. Lauren remains selfish and unreliable. How do our own limitations inhibit poignancy?

Alam’s novel meanders, and there’s lots of time for readers to reflect. Nothing really happens. The impending wedding frames most of the novel. Sarah marches toward it, and Lauren floats along in the maid-of-honor role. Readers dangle in the intersecting portraits of the two women’s interior lives. The omniscient narrator details their reactions and decision-making.

I liked the novel for its honesty, and as a student of literature, I enjoy thinking about why it works. It’s kind of a book version of Before Sunrise, a film that was popular when I was in my late teens. In that, Ethan Hawke and Julie Delpy meet on a train and spend the day talking. Nothing else happens. And yet.

Unlike the leads in that film, Sarah and Lauren aren’t falling in love, but they are bound together by some tenuous, enduring connection. They don’t know each other, and yet they do. It’s “real life happening,” as Lauren thinks near the end. You “have to take it for what it is.” I wouldn’t recommend this book to just anyone, but I can imagine falling into conversation with someone who might become a friend, wandering through several topics together, and then asking, “Have you read Rich and Pretty?”

You’ll like this book if: You enjoy literary fiction and don’t care so much about action. This feels like an English major’s novel, one that invites you to consider form alongside meaning.

Maybe not so much if: You want a traditional story arc or a light read. That’s not this.