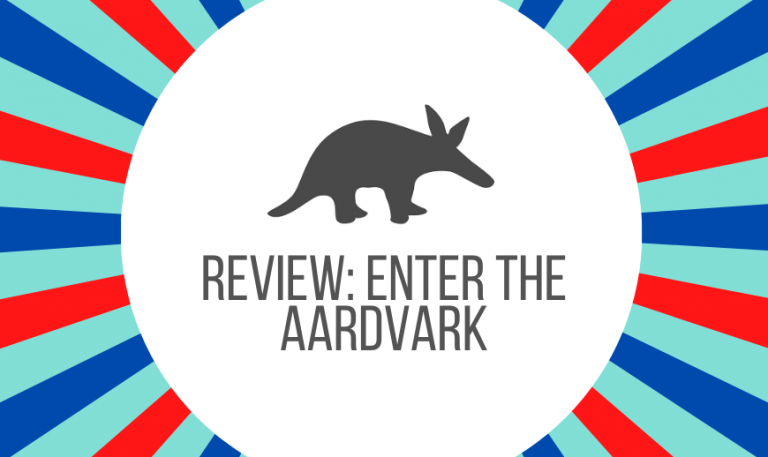 Enter the Aardvark by Jessica Anthony is odd. And funny. And contains everything from magical happenings, to a right wing Congressman, to a stuffed aardvark with a dark past, all in 183 pages.

Congressman Alexander Paine Wilson wakes up one morning to find a large, stuffed aardvark has been deposited on his front stoop. From there, we trace two stories: one of Wilson and his aspirations as a Reagan worship, media conscious right wing politician, the other of Richard Ostlet, the Victorian-era naturalist who first found the aardvark and Titus Downing, the taxidermist who stuffed him. The story jumps back and forth, from descriptions of the craft of taxidermy to the machinations of Washington’s political elite, all while revealing the parallels between the lives of Wilson and Downing, even as they are separated by many years.

At first, I wasn’t sure what to think of this book. It’s the kind of reading you race through and then put down thinking: “well, that happened” without being able to immediately make sense of what you read. The book’s fast pace and direct narration style, as well as absurdist events, reminded me of some of the more surreal moments of a Vonnegut book.

Generally, I pick up novels that are a solid mix of character and plot driven, so the almost entirely plot driven nature of this novel was a change. While Anthony does manage to cram quite a bit of backstory for each character into this short satire, each of the characters she’s crafted was well-done enough to make you want to know more.

None of the characters are all that likable, or rather, though some of them are certainly more sympathetic than others, we don’t have enough time to develop a strong feeling of rooting for any one person in the story. Additionally, there’s something cleansing about Wilson’s unabashed awfulness, not only for its satirical purposes, but also because the lack of moral quandary that his character inspires allows the story to move forward.

Too often, it seems that books that are otherwise good lacked an editor to make them great. Anthony has mastered just the opposite, seemingly choosing each word and point in the story to leave us wanting more. In a longer, more drawn out piece, we might get bogged down in how such crazy turns of events could be possible, but the tight writing style Anthony uses here allows us to become fully absorbed in the story, and gives us something to ponder long after turning the final page. It’s early one morning on a hot day in August, and millennial congressman Alexander Paine Wilson (R), planning his first reelection campaign and in deep denial about his sexuality, receives a mysterious, over-sized FedEx delivery on his front stoop. Inside is a gigantic taxidermied aardvark.

This outrageous, edge-of-your-seat novel hurtles between contemporary Washington, DC, where Wilson tries to get rid of the unsightly beast before it destroys his career, and Victorian England–where we meet Titus Downing, the taxidermist who stuffed the aardvark, and Richard Ostlet, the naturalist who hunted her. Our present world, we begin to see, has been shaped in profound and disturbing ways by the secret that binds these men.