Why: My husband and I recently watched the movie The Prestige which rekindled my love for the mysterious and alluring world of illusions and magic. (I won’t make this a movie review, but I do highly recommend it!) In my mind at least, there is a conflicting set of perceptions surrounding magicians, illusionists and the world of circus performers and vaudeville. The beautiful costumes, elaborate makeup and showmanship create a romanticized universe where anything is possible. Yet there is also a perception of this seedy, competitive and dangerous underside. The Illusionist’s Apprentice by Kristy Cambron has all of these qualities and was quickly added to my TBR list after I saw it pop up on a “new release” list!

“It was Socrates who said, ‘The greatest way to live with honor in this world is to be what we pretend to be.'”

Story: A very public death on New Year’s Eve 1926 has law enforcement digging in to the life and work of a prominent vaudeville illusionist. When the FBI gets involved, a former apprentice of the famed Harry Houdini becomes central to their investigation. A very guarded and fiercely private woman, she forces the FBI agents to prove their trustworthiness, and leads one of them deep into her dark and twisted past. As they seek answers together, the two encounter an extensive plot to which they themselves have been unknowingly playing a central role.

Somehow, in the midst of death’s grip, the call of something beautiful and untainted swept into the nursery room.

Opinion: I read this book in roughly 24 hours. Action packed from the first chapter, Cambron does a great job engaging readers with spaced out plot twists and quiet, personal moments. Aspects of the story are predictable, but the details in the writing are intricate and provide a depth of plot that had me going back to reread how everything tied together.

The other piece for this empathetic reader was how highly invested I became in the emotional toll the story had on various characters. Cambron built in enough backstory and what I’ll call “real-life issues” that had nothing to do with the central plot, that readers can relate to and understand the stresses and emotions felt by each character. I appreciated this groundedness in a book that could easily have become fanciful and surreal.

She reached over and allowed the cuff links to roll from her palm to the tabletop nearby. They both watched them fall, the golden secrets left exposed between them. The simple inroads of trust now placed out in the open too.

Recommendation: If you are an accomplished mystery reader (aka an amateur sleuth), this may not be the book for you. I would recommend this for the occasional mystery reader, or someone who loves the vaudeville/illusionist world as I do. Perhaps not surprisingly, there is also a significant romantic element to the story that I believe does open the novel up to a wider audience. Suffice all that to say that I think this makes a good title to pick up over the winter for dark days, a cup of tea or cocoa and a nice cozy blanket. I don’t think you’ll be disappointed.

Her freedom was, as Socrates had said, in the beauty of a life lived without pretending.

Journaling Prompts: (If you haven’t read any of my other reviews, I enjoy putting together a few questions about the book for those that have already read, or choose to read the book after viewing this post! There are also some great questions at the end of this book, a couple are paraphrased below and noted with an asterisk!) 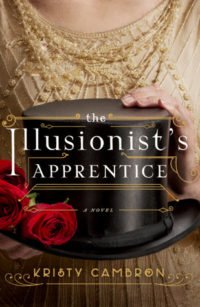 Review: Dear Mrs. Bird and Yours Cheerfully by...

[…] to my experience with The Illusionist’s Apprentice, I read The Lost Castle in basically one sitting on a cold, rainy Sunday. To sum up my opinion, […]