Review: The Ballad of Songbirds and Snakes and The Hunger Games Trilogy by Suzanne Collins 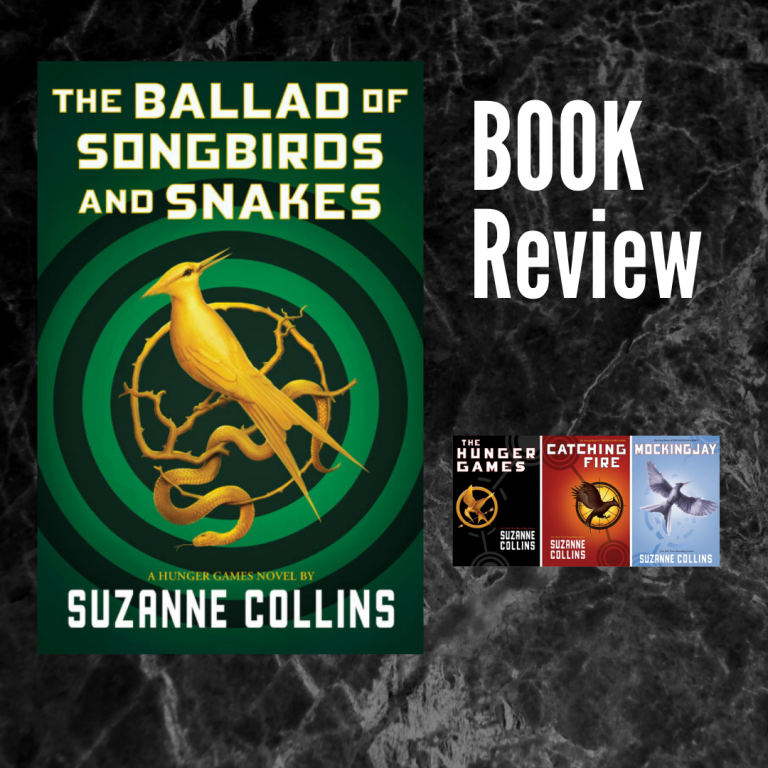 Welcome to the Nostalgic/New Review series! In this series of reviews, I revisit the books and authors that were influential in my teen and young adult years. 2020 has been a big year for publishing “blasts from the past!”

I am kicking off this series with The Ballad of Songbirds and Snakes, which came out this past May, and the Hunger Games trilogy all of which are by Suzanne Collins.

Blast to the Past

The Hunger Games books really became big when I was in college – circa 2009-2012. I was majoring in English, which basically translates to – what is this reading-for-fun you speak of? Nevertheless, like many of my peers, I could not put The Hunger Games down. For me, these books weren’t just the trending, exciting thing in YA – although they were certainly a thrill a minute. These books also, horrified me.

I once had a college professor say that education up through high school teaches the what – memorizing and parroting back facts to your teacher. College, and higher education, is a deep dive into the Why. I think the reason why The Hunger Games books really struck me at the time was because they were more than just entertaining. Like all quality dystopian stories, they also contain a warning. I saw certain aspects of these books reflected around me – especially around the time the movie adaptations were being released. I was darkly amused by the “Capitol” inspired nail polish I saw at Target. Wasn’t this the same kind of bread-and-circus shenanigans as in the book??

The Ballad of Songbirds and Snakes: The Summary

The protagonist of The Ballad of Songbirds and Snakes is none other then 18- year-old Coriolanus Snow  – aka President Snow in the Hunger Games trilogy. The story is set 10 years after the brutal war between the Capitol and the Districts. The once great Snow family is down to their last pennies, their prominence in Capitol society is almost a distant memory. Coriolanus’ last chance for glory comes when he, and several of his fellow students at the prestigious Academy, are each assigned to mentor a tribute in the 10th annual Hunger Games. His path is forever changed when he is selected to mentor Lucy Grey Baird, the girl tribute from District 12….

When it was announced that the protagonist of The Ballad of Songbirds and Snakes would be none other then Coriolanus Snow, my interest was immediately piqued. However I was, apparently, in the minority. A lot of fans meet this news with skepticism. President Snow? He’s far from being a likable character. I would argue that since when does a character have to be likable to be interesting and therefore worth reading about?

And interesting it was! The story is told from Coriolanus’ perspective via the third person limited narrative. At the start of this book, we are weeks away from the 10th annual Hunger Games – for context sake, Katniss Everdeen volunteers as tribute in the 74th Games. The Games don’t look anything like what we know them to be. There is no mandatory viewing, only the citizens of the Capitol watch them. There are no parades or grand opening ceremony, and the arena is literally just a bombed out old sporting events arena.

What makes this story especially intriguing, is the theme of morality. How does humanity get to the point where it can justify something as blatantly abhorrent as throwing children in an arena to fight to the death? While it is pretty clear right away in the book that Coriolanus Snow is by no means a saint, he still has a nagging conscience. However, his desire for power and control is at odds with his sense of morality. He is not alone in this struggle, we see this divide in Coriolanus’ classmates. Some are thrilled by the violence and competition of the Games, others are disgusted. The only person who actively attempts to defy the Games is Coriolanus’ friend Sejanus Plinth, whose family, we find out, was originally from District 2 before buying their way into the Capitol. There are a few of his classmates who also see the Games as horrible but, for whatever reason, this recognition does not lead them to do more then turn away.

Throughout the book, situations arise that cause Coriolanus to do horrible things. However he never truly faces these facts. He twists the stories that he tells both himself, and leads others to believe about him. His conscience, however, continues to nag at him. He IS still a good person! At the story’s climax Coriolanus discovers what he both fears the loss of and loves above all else is control (aka power). In order to continually beat down his sense of morality, he must control the narrative, and stay two steps ahead of the horrors that plague him.

For me, the Hunger Games books will continue to stand the test of time. I enjoyed reading them as much now as I did when I was 19. I think I enjoyed the arena/thriller part of it more at that time, and now I find the how-and-why even more interesting then I did at the time. For this reason, I enjoyed the somewhat slower pacing in The Ballad of Songbirds and Snakes. I will say, however,  there is no way that this book would have made it without the Hunger Games books first. It’s only relevant in light of those books to give it context.

If you are like me and are fascinated by the how-we-go-here aspect of dystopian literature, you would enjoy The Ballad of Songbirds and Snakes. While a hero’s journey is uplifting, reading the villain’s story allows for the opportunity to take a closer look into our own dark corners.