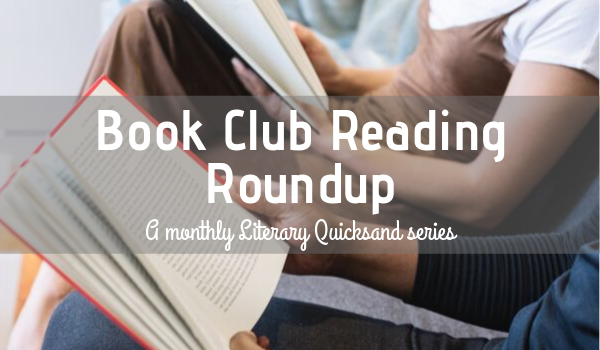 What a weird time to be a book club addict, like myself. All of my book clubs for the past two months have been virtual, though one of my book clubs just started reintroducing in-person meetings. We all hung out in our host’s yard in a 6-feet apart circle, which seemed like a good idea initially — until her neighbor started mowing his lawn (of course!).

We still managed to make it work, and it was awesome to see people in person for a change.

If this is your first time checking out the Book Club Wrap-Up, I suggest hopping over to my first post, in which I describe each of my different book clubs. It’s a helpful reference. 🙂

And now onto what we read and discussed most recently:

Bad Blood: Secrets and Lies in a Silicon Valley Startup by John Carreyrou

The tale of Elizabeth Holmes’ Silicon Valley startup scam was initially covered by Carreyrou in a series of Wall Street Journal articles and then turned into this book (and later a documentary). I found his storytelling a little all over the place — there were a lot of people to follow and he jumped back and forth in the timeline too much for my liking. Overall, though, the rest of the book club found it really riveting.

I’m not always a fan of nonfiction as a book club pick, but this one turned out to lead to good discussion.

Where the Crawdads Sing by Delia Owens

I was really excited when this book was picked for our most recent discussion. I absolutely loved it when I read it a while ago (for another book club), and I was excited to talk about it again. We were supposed to chat about it in April, but ended up postponing. When it became clear we wouldn’t be able to meet in person for a while, we opted for a Zoom meeting in May.

This story of a “Marsh Girl” living on the North Carolina coast was pretty universally enjoyed, as I expected.

The Farm by Joanne Ramos

We read this novel for Women’s History Month (March) but ended up meeting in April, via Microsoft Teams. Our group ended up being a little smaller than usual, but everyone still had a lot to say!

I had read this one before too and really liked it, but as a new mom, I came to it with a new perspective. The story focuses on Golden Oaks, aka “the farm,” where a bunch of “hosts” live while they’re pregnant with babies that will eventually go to extremely wealthy parents.

It tackles a lot of tough topics, including class/wealth, immigration, family/love/motherhood, gender, race, and religion, which meant there was a whole bunch of places for the discussion to go. If you haven’t read this one, I highly recommend it — especially as a book club pick.

I would love to hear what some of your book clubs’ favorites were so far this year and what you’re all doing to keep discussing books while most of us are in quarantine — let me know in the comments below.