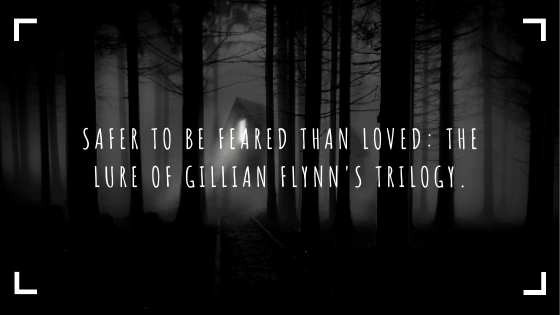 In my opinion, Gillian Flynn’s crime thriller novels entice you in the same way that true crime documentaries do; Making a Murderer isn’t easy watching, but you have to finish it anyway. And I think that Flynn’s three novels Gone Girl, Sharp Objects, and Dark Places grip you in the same way. I have to point out that it’s probably ironic that I enjoy Flynn’s dark and gruesome novels as I absolutely hate horror films. I like to be creeped out, not unable to sleep.

For me, one of the main attractions to crime fiction, and particularly the crime thriller, is that they’re not targeted at one particular audience. They’re in the “everyman’s genre”, anyone can pick them up and, potentially, enjoy them. An appealing feature of Flynn’s crime fiction in particular is the role that women play in her writing and how she portrays her female protagonists. She’s done away with the classic “femme fatale” female character in the crime novel and she’s created female characters that show that women can do what men can do. Women can commit crimes and women can solve crimes. Admittedly, she hasn’t created role models, but she has achieved some sort of gender equality.

In all three of her crime thriller novels, Gone Girl, Sharp Objects, and Dark Places, Flynn presents the reader with an array of female characters. She puts a huge emphasis on the everyday, mundane woman. In Gone Girl, Amy has a habit of accusing her partners of rape and when she’s finally had enough of her husband, she disappears without a trace and insinuates her husband in her disappearance. Devious, evil, but undoubtedly impressive. In Sharp Objects, the three female protagonists suffer to no end. The narrator, Camille, is a self-harming journalist who has returned to her hometown to report on a series of grisly murders. Her mother, Adora, suffers from Munchhausen by Proxy which leads her to poison her own children as a way of gaining attention and praise from others. Camille’s younger sister, Amma, is thirteen years old and so hypersexual that she makes you uncomfortable.

They’re not easily likeable characters, but they have a very real element to them that brings them to life on the page. In Dark Places, Libby Day is the sole survivor of a massacre in which her entire family lost their lives and for which her older brother was sentenced to life in prison. Having lived in a cotton-wool fantasy for most of her life, Libby finally decides to confront her past and find out the truth about that night. Again, she is not a particularly likable character to begin with, but she has something about her that brings her to life.

Flynn’s novels are engulfed in darkness and suffering, so why do I like her style of crime thriller so much?

I think it’s because Flynn isn’t afraid to show the darkness that could be in all of us. She portrays women who have the potential to be evil or who hate themselves. Although these are not happy portrayals of women, they are realistic. I find this narrative of women kind of refreshing; it’s not shying away from reality. She’s created a sort of neo-femme fatale in her crime narratives. These women are the agent in their own stories rather than the object of desire for the male narrative.

One of Flynn’s triumphs is that she is able to create female protagonists who are not likeable. She has moved in a different direction to most narratives in which there is a female protagonist. Libby, Amy, and Camille are all extremely difficult to like and connect with at the beginning of their respective stories. While Libby and Camille develop somewhat as characters that you’re able to empathise with, it is almost impossible to have the same feelings about Amy in Gone Girl. She is an extremely jealous and possessive person, who you’re sure is an absolute psychopath. She doesn’t evolve during her story; she remains committed to her original goal – to make her husband’s life hell. I think the fact that Flynn keeps Amy as such an unlikeable character is pushing the boundaries into an area of progressive female narrative. Flynn’s stories show that not all women are likeable all the time. We all have our bad days, albeit not as bad as her protagonists, and we aren’t always likeable. Flynn’s commitment to this narrative has allowed her to create sharp characters who have a realness to them.

Another of Flynn’s triumphs is the plausibility of her stories; they all could be a news story that you see on TV. Admittedly, some elements of her thrillers are wild beyond belief, but a large amount of the situations encountered in her novels are very realistic. The close attention to detail in each of her stories creates vivid and believable story lines that hold you captive until the very last page.

We keep coming back for more

Her grisly, graphic and, at times, disturbing descriptions aren’t for the faint-hearted, but they draw you in much like serial killer documentaries. You don’t know why you like them, but you always want more.

gillian flynnI would recommend this book to otherssuspensethrillertrilogy
Share 0 FacebookTwitterPinterestEmail