Review: Two Can Keep a Secret 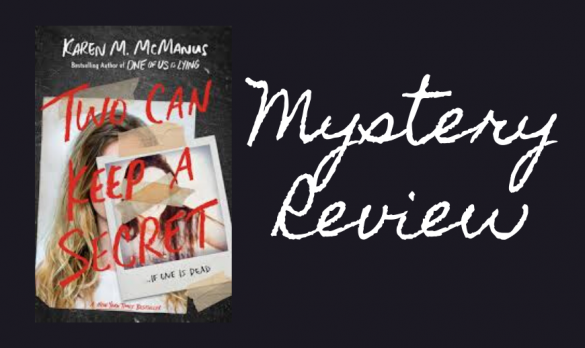 With their mom off to rehab and their dad unknown to them since birth, twins Ellery and Ezra are left with their grandmother in the small town of Echo Ridge, living in the house where their mother and her own twin sister grew up.

After their mother’s twin Sarah disappeared on the night of her homecoming dance, Ellery and Ezra’s mother Sadie has avoided home, turning to frequent moves and prescription drugs to keep the nightmares of her past at bay. Sadie hopes that sending the twins back to her hometown will provide them a safe place while she gets herself back together, but the town’s deadly past resurfaces at homecoming time once again.

With Ellery as one of the targets, will she and Ezra face the dangers of the past once again? Someone’s targeted the homecoming queens of Echo Ridge before and now they’re back and ready to protect their secrets, even if it means being willing to kill.

At one point in Two Can Keep a Secret, Ellery, a true crime enthusiast and one of the book’s main narrators, references events being stacked like Jenga blocks in a satisfying and orderly manor leading up to a conclusion. This is how much of the book read to me, and I enjoyed how McManus balanced the events of the past and the present without too many jump scares or big reveals.

One of my biggest frustrations with mysteries is when I feel like the conclusion is too obvious right from the start, but here the author kept me interested and racing to the end so that I could figure out who did it. The pacing of the novel was slow enough to provide vivid details and background stories of the characters but not so slow that your mind got distracted from the main events.

I especially loved the twins and their friend Malcolm, and without giving away spoilers, I felt that the relationships, both familial and romantic, were realistically portrayed in a way that resisted happy or trite endings just for the sake of wrapping things up.

I am torn over the ending, and who the culprit turned out to be: on the one hand I felt the pieces came nicely into place, but on the other hand it seemed almost too random when the mastermind behind the deaths was revealed. Also, I would have liked more time to see the characters develop, especially some of the side characters that turned out to have a major role in the events in Echo Ridge.

Overall, though, I felt like this book was well-plotted and the device of having chapters told from the perspectives of alternating main characters made the book’s narration well-rounded and ultimately helped me connect to each character more. McManus also did a great job capturing the interconnected feel of a small town where tragic events continue to loom large for decades and tracing not just the lines connecting the past and present but also showing Ellery and Ezra how the town had affected their mother and allowing them to have conversations with her and old classmates of hers that were honest both about their love for their mom and the reality of her choices in life.

I would recommend this book to anyone looking for a fast-paced, character driven mystery that reveals its clues in a well-plotted way and allows you to get inside its characters heads.

Returning to their mother’s hometown, twins Ellery and Ezra find themselves caught up in the murder of the town’s popular girls and struggling to figure out how it fits with the disappearance of their own aunt years ago.