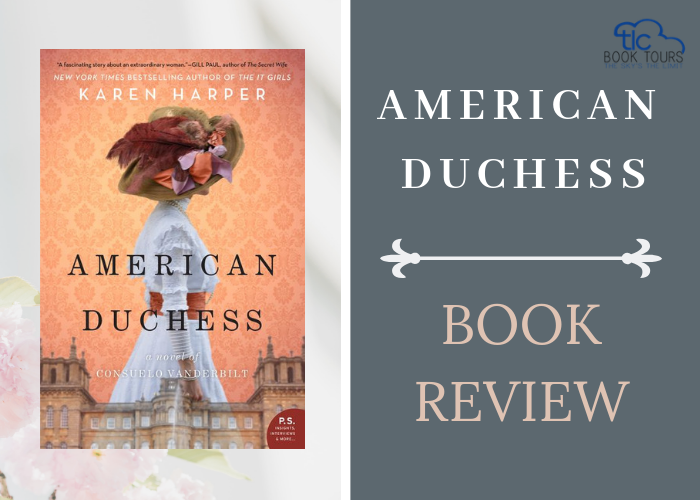 The Vanderbilt name is well-known as a part of US history, but I didn’t know much about the individual members of the family. American Duchess focuses on the life of Consuelo Vanderbilt, the daughter of William Vanderbilt and his first wife, Alva from her teenage years and ultimately unhappy marriage to the Duke of Marlborough in 1895 through World War II.

The span of time covered in this historical fiction novel is vast since it follows Consuelo through most of her life. Unfortunately, that means the author jumps rather abruptly from one time period to the next. I found the transitions a bit jarring and felt constantly off balance trying to figure out how much time had passed. It also means that this is more of an overview than an in depth look at any aspect of her life. While some portions were covered well, other events were rushed through or glossed over. I’m also not entirely sure why the story was cut off at WWII. The ending was sweet, but there didn’t seem to be any real reason for stopping her story there.

There’s no denying that the subject matter is engaging, but the writing fell flat in American Duchess. A few times I forced myself to pick up the book and continue reading because I wasn’t completely invested in the story. However, if you’re looking to learn a bit more about the unique life of one of the Vanderbilts, this novel will do the trick. 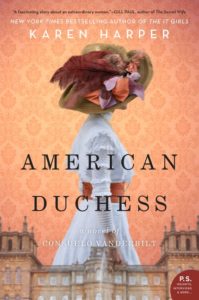 Before there was Meghan Markle, there was Consuelo Vanderbilt, the original American Duchess.  Perfect for readers of Jennifer Robson and lovers of Downton Abbey.

Karen Harper tells the tale of Consuelo Vanderbilt, her “The Wedding of the Century” to the Duke of Marlborough, and her quest to find meaning behind “the glitter and the gold.”

On a cold November day in 1895, a carriage approaches St Thomas Episcopal Church on New York City’s Fifth Avenue. Massive crowds surge forward, awaiting their glimpse of heiress Consuelo Vanderbilt. Just 18, the beautiful bride has not only arrived late, but in tears, yet her marriage to the aloof Duke of Marlborough proceeds. Bullied into the wedding by her indomitable mother, Alva, Consuelo loves another. But a deal was made, trading some of the vast Vanderbilt wealth for a title and prestige, and Consuelo, bred to obey, realizes she must make the best of things.

At Blenheim Palace, Consuelo is confronted with an overwhelming list of duties, including producing an “heir and a spare,” but her relationship with the duke quickly disintegrates. Consuelo finds an inner strength, charming everyone from debutantes to diplomats including Winston Churchill, as she fights for women’s suffrage. And when she takes a scandalous leap, can she hope to attain love at last…?

From the dawning of the opulent Gilded Age, to the battles of the Second World War, American Duchess is a riveting tale of one woman’s quest to attain independence—at any price. 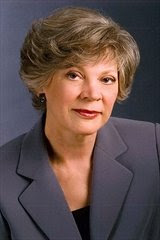 New York Times and USA Today bestselling author KAREN HARPER is a former Ohio State University instructor and high school English teacher. Published since 1982, she writes contemporary suspense and historical novels about real British women. Two of her recent Tudor-era books were bestsellers in the UK and Russia. Harper won the Mary Higgins Clark Award for Dark Angel, and her novel Shattered Secrets was judged one of the best books of the year by Suspense Magazine.

Thank you for being on the tour!