Review: When the Men Were Gone 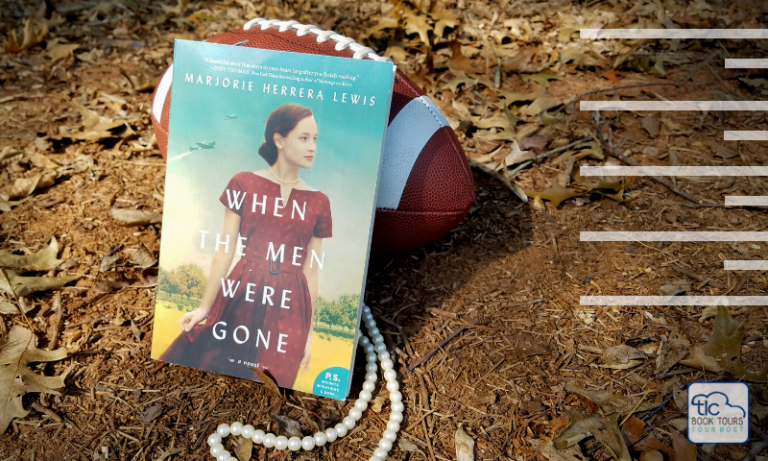 Story: When the Men Were Gone by Marjorie Herrara Lewis is based on the true story of Tylene Wilson. Tylene has faced many different forms of loss throughout her life, and when the idea of losing a football season presents itself due to WWII taking all able-bodied males, she recognizes the potential for disaster. Facing scorn, ridicule and disbelief, Tylene steps foward to lead a group of young men into the trenches on the gridiron instead of fox holes on the battlefield. Her courage, selflessness and determination is sure to awe and inspire.

Just above the coffeepot and taped to the wall was a typed version of the varsity football schedule, a reminder of our annual anticipation – second only to Christmas – where on fall Friday nights we meet at our town’s single largest gathering spot: our football field.

Why: My father coached high school football for 30+ years, and some of my earliest father/daughter memories are waiting up after a game and breaking down game film. I’ve now been working in  sports for the better part of 15 years, and Tylene Wilson is an example of the women who paved the way for me. I am consistently asked what it’s like to be a woman in a male-dominated industry, and Tylene has a very similar mentality about it – why does gender matter?  I love hearing stories of women in this industry who stand strong and let their work, and the care they put into it, do the talking.

During the week, neighbors might be fierce competitors in business and classmates may jockey for grades, but not on those Friday nights when the worries of life are washed away come kickoff. When our sons and brothers do battle for our collective pride and honor, we become one.

Opinion: I enjoyed When the Men Were Gone. For me, Marjorie Herrara Lewis‘ writing style fits the town and the era by being simple, straightforward and without much pretense. I appreciate that more after completing the book and taking some time to contemplate it. Originally, I had been disappointed as I’d wanted more from the text. It isn’t the deepest or most complex work, but it is authentic and heartfelt. You can feel the struggle that Tylene goes through and the ache for each lost soul connected to Brownwood. Anything more flowery or intricate would have done a disservice to the telling of Tylene’s tale. I hope Ms Herrara Lewis continues to write and share her stories with us as I look forward to reading them.

Recommendation: At 240 pages, this is a great, quick read. The concept of a strong female character countering a male-dominated past time is also very timely in my opinion. I actually think this would make a good read for high school students in addition to those who like WWII novels and football stories. It addresses the challenges on the home-front through the lens of sport and how sports can bring people together. The novel also considers the universality of loss in a number of capacities: the loss of child, of father, of brother, of friend, of youth, of health, of innocence. It encompasses a lot in a few short pages, and being based on a true story makes it all the more relatable. In general, I recommend this book for readers that need a good story about a good person doing good for the good of her community.

In that moment, I sensed that Mr. Redwine finally understood what it meant, even to him, to keep the boys playing, to keep them home for one more year.

For a book titled When the Men Were Gone there are a lot of men in town. Let’s talk about them!

About When the Men Were Gone

Football is the heartbeat of Brownwood, Texas. Every Friday night for as long as assistant principal Tylene Wilson can remember, the entire town has gathered in the stands, cheering their boys on. Each September brings with it the hope of a good season and a sense of unity and optimism.

Now, the war has changed everything.  Most of the Brownwood men over 18 and under 45 are off fighting, and in a small town the possibilities are limited. Could this mean a season without football? But no one counted on Tylene, who learned the game at her daddy’s knee. She knows more about it than most men, so she does the unthinkable, convincing the school to let her take on the job of coach.

Faced with extreme opposition—by the press, the community, rival coaches, and referees and even the players themselves—Tylene remains resolute. And when her boys rally around her, she leads the team—and the town—to a Friday night and a subsequent season they will never forget.

Based on a true story, When the Men Were Gone is a powerful and vibrant novel of perseverance and personal courage.

Marjorie Herrera Lewis knew early on she wanted a career related to sports. After several years at small newspapers, at age twenty-seven she began working at the Fort Worth Star-Telegram. Soon after, she was named a beat writer for the Dallas Cowboys and eventually joined the Dallas Morning News sportswriting staff. While writing When the Men Were Gone, she became inspired to try her hand at coaching football and was added to the Texas Wesleyan University football coaching staff. She presently teaches media ethics at the University of North Texas.

Check out these other sites for more on When the Men Were Gone!