Memoirs Better Than Fiction: True Stories Impossible to Put Down 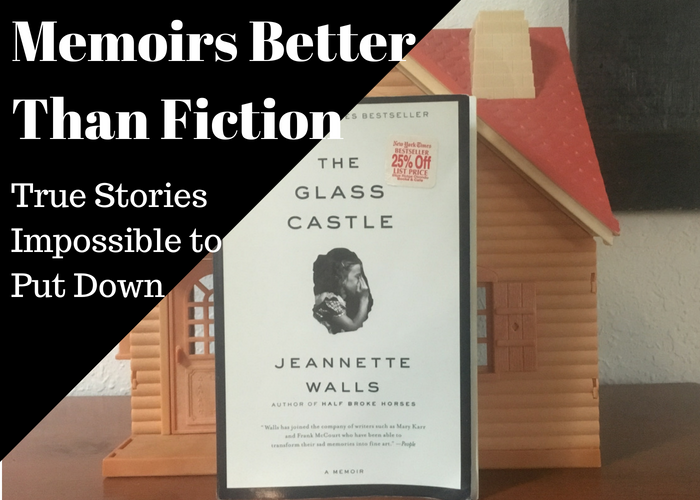 Truth is Stranger than Fiction

This saying couldn’t be more true when talking about memoirs. A good memoir can easily rival the best fiction novel for one reason: it actually happened. Sure, every celebrity who ever lived has written down their life story to keep their dwindling career relevant, but there are so many people who have truly amazing, powerful, inspiring stories. Pair that with good writing and you have a book you won’t be able to put down.

I have found myself reading a lot of memoirs this year. One true story after another that I couldn’t put down. It got me thinking that I’ve read more than a few memoirs in my life that were better than a lot of fictional books I’ve read and felt compelled to share them with you.

Here are some great memoirs that are better than fiction:

Published in February of 2018, this book is everywhere right now. Tara Westover was born the youngest of seven children at the base of a mountain in rural Idaho. She didn’t have a birth certificate until the age of 7 and didn’t see the inside of a classroom until she enrolled at BYU. Westover was raised in a fundamentalist Mormon household with a father who was more concerned about preparing for the End of Days and protecting his children from government brainwashing than their safety or well-being. Fast-paced and beautifully written, this memoir is impossible to put down.

The Glass Castle: A Memoir

Educated has been compared to The Glass Castle a lot, and understandably so. They are both stories of tumultuous and turbulent childhoods, but they are also opposites in a lot of ways. Jeanette Walls’ family moved constantly and never stayed in one place for very long. Tara Westover’s family lived on the same land for generations. Walls’ father was a drunk and tried to cheat the system, whereas Westover’s father was extremely religious and paranoid about anything having to do with the government. However, both fathers were probably struggling with bi-polar disorder. Regardless of their similarities and differences, this is a powerful story of resilience and perseverance.  It’s hard to read story after story of neglect experienced by the Walls children. It’s also inspiring to see them make it to the other side.

I Am, I Am, I Am: Seventeen Brushes with Death

From Joli  – I Am, I Am, I Am is written in vignettes, so you’re reading snippets of Maggie O’Farrell’s life. What makes it so compelling is that it’s told in stories about near-death experiences! It becomes a page-turner when you begin every new story and you want to know what it’s going to be that will bring O’Farrell near death this time. Not only is it an incredibly insightful exploration of life and death, but It’s also a page-turner!

The Girl Who Smiled Beads: A Story of War and What Comes After

It’s one thing to know the definition of the word genocide as defined in a dictionary. However, it’s a completely different thing to read the story of someone who’s actually lived it. At six years old, Clementine Wamariya and her sister fled the Rwandan massacre not knowing if their parents were dead or alive. After a string of harrowing experiences throughout Africa, Clementine and Clare were granted asylum in the United States. Even though her life changed dramatically from one of savage brutality to safety and opportunity, the past cannot be forgotten. This newly released title is one not to miss.

Born a Crime: Stories from a South African Childhood

If you read one book all year, make it this one! This book is absolutely incredible. Trevor Noah, who you might recognize from The Daily Show, was born to a black mother and white father during the Apartheid in South Africa. I didn’t know enough about the apartheid to realize how serious this was. When Noah was a child, the government actually had the authority to take a child away from their parents if they were of different races. When they walked down the street, Noah’s mother would walk at a safe distance behind him so no one would suspect they were related. True to form, Noah’s writing is witty, fast-paced, hilarious, yet thought-provoking.

The Boy on the Wooden Box: How the Impossible Became Possible on Schindler’s List

I picked this young adult memoir up at my local library while I was teaching 7th grade language arts and devoured it in a weekend. It was so good I couldn’t stop talking about it for weeks. This is the true story of the youngest person on Schindler’s list. Leon Leyson was ten years old when Germany invaded Poland, forcing his family to move into the Krakow ghetto. They miraculously kept themselves out of deadly concentrations camp through faith, persistence, luck, and the generosity of Oskar Schindler.

Wild: From Lost to Found on the Pacific Crest Trail

This memoir was wildly popular upon its release in 2012 and rightfully so. I resisted the hype and didn’t read it until earlier this year for my book club. Once I started reading it, I couldn’t put it down. Strayed’s emotion in her memoir is raw and real; something almost tangible. It’s amazing what she overcame, but even more amazing is the physical feat of hiking the PCT.

The Diving Bell and the Butterfly: A Memoir of Life in Death

In college I majored in French and attempted to read this amazing memoir in French, the language in which it was published. However, Jean-Dominique Bauby was a genius and his vocabulary was beyond my abilities. It was taking me way too long to read it in French so I ended up switching to English. This heart-breaking memoir details the beauty and fragility of life. Bauby was the editor-in-chief of French Elle when he suffered a rare stroke to the brain-stem. He was completely paralyzed except for the use of his left eye. By creating an alphabet through blinking, Bauby dictated his life, his experiences, his hopes and regrets. Sadly, Bauby died two days after the publication of his memoir.

Brain on Fire: My Month of Madness

At the age of 24, Susannah Cahalan was on the brink of adulthood. She had a promising future ahead of her, but it all came to a screeching halt when she woke up strapped to a hospital bed with no recollection of how she got there. Told in captivating prose, Cahalan tells the amazing story of her descent into madness, her family’s never-ending faith in her, and the lifesaving diagnosis that almost didn’t happen.

H Is for Hawk

A friend gave me this book shortly after my dad passed, but it took me several years to finally pick it up off the shelf. H is for Hawk is the story of Macdonald adopting a goshawk while dealing with the sudden death of her father. This is a story of grief and healing through immersion of the natural world.

What are your favorite memoirs?

I would recommend this book to others
Share 0 FacebookTwitterPinterestEmail

I can’t let this post go by without also mentioning My Glory Was I Had Such Friends. I recommend it to everyone! It’s an amazing memoir about life, death, and friendship, and I think everyone should read it. Period.