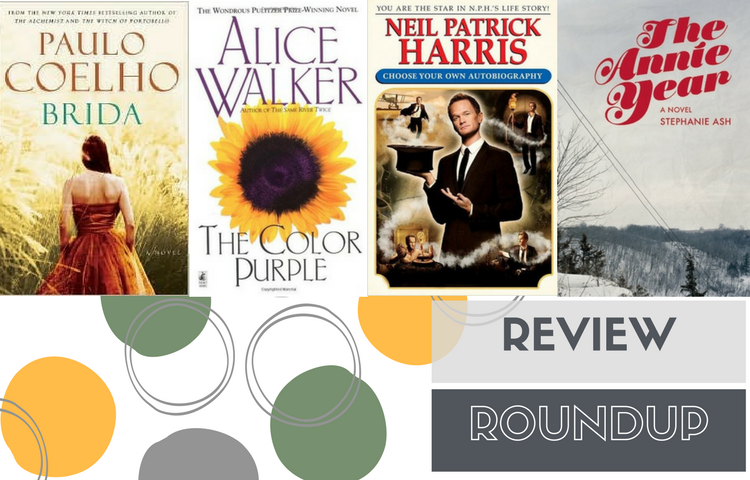 We girls at LQ read a LOT of books. Sometimes we write full reviews, but sometimes, especially for older novels that were published not very recently, it makes more sense to put a few synopses together. I hope that these little mini-reviews in my Review Roundup can inspire your reading for the months ahead!

“People like you who live closer to the river do not really understand people who live far away from it.  Don’t feel bad about it.  It’s probably not your fault.  But don’t pretend it’s not true either”.

The Annie Year by Stephanie Wilbur Ash is set in America’s Midwest, and tells a tale of a slow rural community that is struggling to survive in a fast-paced world. Tandy Caide, the town CPA, is our main character, and she both experiences and witnesses the story as almost a 3rd party to her own life. The small town in Iowa faces drug abuse, adultery, teen pregnancy, alcoholism, and suicide head on with a bittersweet outlook.

I gave this book 3 stars on Goodreads, but it doesn’t really do it justice.  The characters are grizzled and worn, and sometimes pretty darn bleak, but there is also something about the themes in this story that really are brilliant. A lot goes on in “boring” small towns. Whether it be fighting to be recognized, struggling with BIG issues like teen pregnancy and drug abuse, or even just the everyday scandals of affairs and love, the small-town buzzes. Therefore, even though this book is grounded in the Iowa sod, it’s got a lot going on. Pick it up, city folk. This one is for you.

Brida is one of Paulo Coehlo’s first works, even pre-dating the Alchemist. The story’s premise circles a young Irish woman called Brida, who wishes to become a witch. Setting off on a journey to find her inner magic, she encounters the true depth of magic: love.

Coehlo speaks of “witches” in a more pagan sense than seems to be written of lately (think more Faerie rituals, less Harry Potter). It asks some really important questions that a lot of us are asking: How will I find my Soulmate?, Where is the Magic in the world today?, and What happens when I die?.

I didn’t love Brida. Partly, I think it’s possible that some of the beauty is lost in translation, literally. I read this little book in English, but its original print (and indeed, synopsis on Goodreads) is in Spanish. However, there are some really beautiful themes, and in fact it was given to me by a Bookish Girl who was sharing one of her favorite novels. I would say that if you are looking for whimsy in between some tougher questions and are in perhaps a spring breakup/single funk, this book might be a good fit for you.

Choose Your Own Autobiography is NPH’s tell-all. Released in October 2014, it starts from the beginning of his Dougie career, and careens through history to today, with the birth of his 2 children Harper and Gideon. Want to know more about Barney Stinson/How I Met Your Mother? Check. Want an inside look at NPH and David Burkta’s relationship? Check. Want some fake endings where NPH (or his whole family) dies a disastrous and tragic death? Yeah, check.

I actually chose to pick this audiobook up after reading Aubrey’s Goodreads review! She gave it 4 stars and recommended it as a “top notch audiobook” and “One of the best celebrity memoirs I’ve read”. I especially like celebrity memoirs when in audiobook format, so I gave it a whirl. You definitely should too – NPH is funny, sweet, and informative all in one. I also ended up giving it 4 stars, and would recommend it to anyone looking for a beach read with a little interactive twist to it.

I picked up The Color Purple, by Alice Walker, when I was in between library books in February. It has been on my shelf at home for a while and is certainly a book I should have read much earlier. Unfortunately for me, my (Canadian) high school curriculum didn’t include it and somehow, I missed it in my pursuance of great reads.

The book revolves around the life of Celie, who is a young girl growing up in the Deep South of America. In her early life, Celie is raped by her father, has her children taken from her, and is essentially sold into a horrible marriage. However, she slowly befriends her father’s lover, and things begin to change for her life. The Color Purple has some terribly dark themes and doesn’t shirk away from addressing many of the realities of living under thumb, especially as a black woman and in this period of time. Alice Walker is also a beautiful writer, and we see the progression of Celie as she becomes increasingly literate and educated about the workings of the world. It is really no wonder that this book boasts a Goodreads average rating of 4.17 – it’s a nouveau classic.