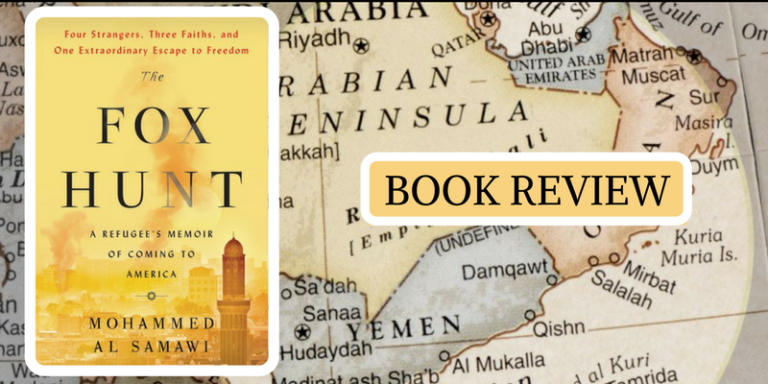 First of all, I have to say thank you to Joli for choosing me to review The Fox Hunt, by Mohammed Al Samawi. So many of my passions and “bookish interests” came together and made reading Mohammed’s book a privilege.

Mohammed’s story begins and ends, as he says, with a book.  The Fox Hunt begins in Yemen with Mohammed beginning to discuss religion with first his favourite British (and Christian) ESL teacher Luke. I loved the openness that Mohammed has in admitting that initially, his concern is over Luke’s immortal soul, but then his growing internal conflict as he realizes that the 3 founding Abrahamic religions are not so different after all.

“The jews are foxes” our teacher said. “Even if they seem good, they’re always hiding something.

Mohammed begins to feel endangered in his home city of Sana’a, and so he leaves for the southern city of Aden in order to attempt to carry on his work with NGOs in Yemen. By this time, he has also become an influential character with YaLa Young Leaders and travels to conferences in order to continue his learning on peace and tolerance, particularly between Israeli and Palestinian peoples. I was inspired by the work that Mohammed puts his heart into, especially considering both the personal risk and danger that his family is exposed to, in order to acquire these opportunities.

Disability and refugee status play significantly into this story, as does the sheer cost of both war and poverty. Mohammed’s poorly addressed childhood illness contributing to his lack of motor skill plays below the surface, and even at one point causes a near miss in his evacuation to Djibouti via an Indian ship.

The involvement of Mohammed’s friends/acquaintances is honestly near-unbelievable. These individuals, some of whom barely knew Mohammed at the time of the storytelling, stop at nothing to get options for his safe travel to the USA. Even after arriving in San Francisco, they continue to help and support him with sustaining a life once in America. I found myself wondering what I would do in either Megan/David’s or Mohammed’s shoes. None of us ever expect our country will find itself being wrenched apart, nor do we expect to be called upon to act for a friend in the same situation. To this day, Mohammed is fighting for his people and his country. I hope that this book is exceedingly well-received, as I am betting that its’ proceeds to the author will, in some way, be used to continue his mission.

But I offer another interpretation. What if the fox is correct? What if there are instances in which the right choice is to leave your natural habitat? What if the only way to survive is to trust the alleged enemy?

My own career focus being on water engineering, my heart broke when I read the last chapter of The Fox Hunt. I did some independent Google searching and found that as of February 8 of 2018, the cumulative total of suspected cholera cases stands at 1,051,789 suspected cholera cases and 2,252 associated deaths since April 2017. Though there has been significant drop-off in the last few months, we can expect that these numbers will surely start to climb again in the summer if measures are not in place to provide clean drinking water and sanitary systems to the people of Yemen.

Please read this book. It is a cry from Mohammed to the USA (and others) that action is required, in order to help the innocent people in a war-torn country survive.

Mohammed Al Samawi was born in 1986 in Yemen. In his midtwenties, he became involved in interfaith groups promoting dialogue between Muslims, Christians, and Jews. In 2015, during the Yemeni Civil War, he fled from Aden to the United States. Since his entry to the United States, he has worked for several NGOs that promote peace and religious tolerance.

Read other fabulous reviews of The Fox Hunt here:

I’m so glad you liked this one! It really does sound like an important read for so many.

Wow, those cholera numbers are staggering! And it is something that is so preventable… how incredibly heartbreaking.