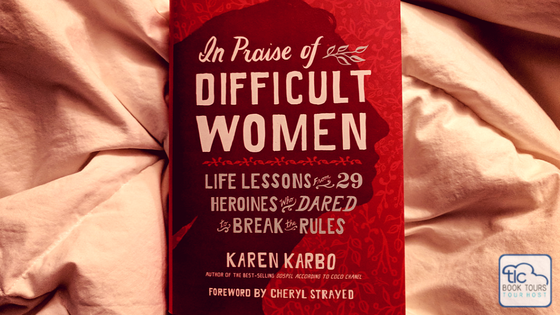 I not only learned new things about 29 influential women, I also discovered new heroes after reading In Praise of Difficult Women by Karen Karbo.

It was an inspirational read, just in time for Women’s History Month!

The way Karbo writes these 29 short stories is phenomenal. She writes it from her POV, with credible sources and quotes, of course, but I found myself re-reading some parts because I couldn’t tell if I was still reading Shonda Rhimes’ story or Karen’s.

Confession: I didn’t know of more than a few of these women, so it was exciting for me to learn about new women who made waves in history.

These stories shed light on the messy moments in the lives of these women, from the 3rd divorce to running a Saturday Night Live show while in labor. It reminds us that they’re still human and you don’t get to be a difficult woman without a few bumps in the road.

Along with good stories, new learnings and beautiful illustrations of each female highlighted, there was also a lesson to be learned with each story.

This read is one of my favorites by far this year, and I’m excited to borrow it to my girlfriends. It would also make a great coffee table book for those who don’t want to devour it all in one sitting.

Being “difficult,” Karbo reveals, might not make life easier. But it can make it more fulfilling–whatever that means for you.

Pick up your copy:

KAREN KARBO is the author of multiple award-winning novels, memoirs and works of nonfiction. Her best-selling “Kick-Ass Women” series includes The Gospel According to Coco Chanel: Life Lessons from the World’s Most Elegant Woman, which was an international bestseller. Karbo’s short stories, essays, articles and reviews have appeared in Elle, Vogue, Esquire, Outside, the New York Times, Salon, and other publications. She is a recipient of a National Endowment for the Arts Fellowship in Fiction, and a winner of the General Electric Younger Writer Award. Karbo lives in Portland, Oregon, where she continues to kick ass.

I received this copy from TLC Book Tours in exchange for an honest review.

I can see why this book is becoming a new favorite for so many readers – I’m really excited to read it myself!

I cannot WAIT to read this!

I liked how the author reclaimed the word ‘difficult’ too and how she wasn’t afraid to show these women had flaws, but were still extremely admirable.

[…] I’ve been on an “all about women” reading kick these last few months, reading In Praise of Difficult Women and The Wild Woman’s Guide to Traveling The World in addition to That’s What She Said. […]