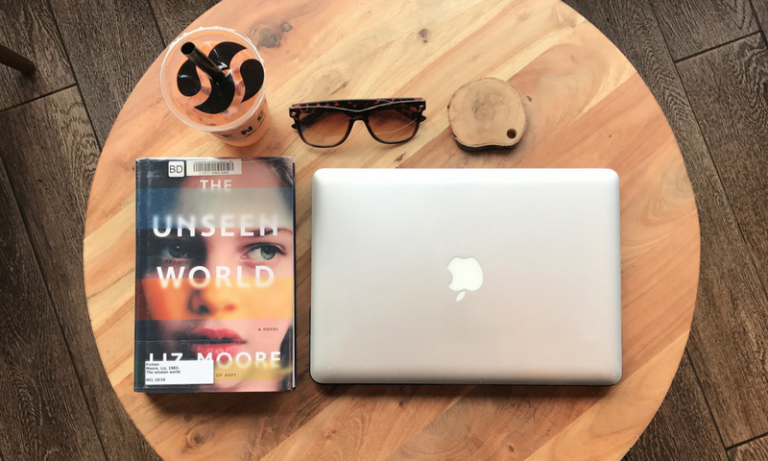 Joli and I are part of the Girly Book Club, an international book club with members in over 50 cities around the world. We all read the same book and discuss it on the same night of each month. It’s super fun and it’s actually how I met Joli! For July, we read The Unseen World by Liz Moore, and we thought it’d be fun to review it together.

Ada Sibelius is raised by David, her brilliant, eccentric, socially inept single father, who directs a computer science lab in 1980s-era Boston. Home-schooled, Ada accompanies David to work every day; by twelve, she is a painfully shy prodigy. The lab begins to gain acclaim at the same time that David’s mysterious history comes into question. When his mind begins to falter, leaving Ada virtually an orphan, she is taken in by one of David’s colleagues. Soon after she embarks on a mission to uncover her father’s secrets: a process that carries her from childhood to adulthood. What Ada discovers on her journey into a virtual universe will keep the reader riveted until The Unseen World‘s heart-stopping, fascinating conclusion.

Janna: I really liked this story and the characters. One of the things I liked most was the slower pace. I know not everyone is a fan of a slow-moving book, but I really enjoy when a book takes its time and gives characters time to develop. I loved the relationship between Ada and her father. There were a lot of touching moments between them.

Joli: I really enjoyed this one! I loved the relationships between the characters – they’re really well drawn out and complicated, like real, human relationships tend to be. I also loved the story – it’s a mystery that makes you unable to put the book down. Being in Ada’s head as she navigates finding out the truth about her father and her family was fascinating.

Q: Did this book make you cry?

Janna: I asked this question and I’m curious what your answer is, Joli. This book made me sob…very early on. I don’t want to reveal too much, but one of the characters exhibits early-onset Alzheimer’s and I thought the book depicted the slow and then rapid decline of the disease quite well. My grandma died from Alzheimer’s and my grandpa isn’t doing so well so maybe it was my personal experience that put me over the edge.

Joli: Aw, Janna! I did not cry, but those were sad moments. I loved the way that was done, though – it was so real and and I could feel Ada’s pain.

Q: What did you think of the big reveal towards the end of the book?

Janna: I will be the first to admit that plot twists always surprise me in both books and movies. I should have seen the massive secret in this book coming, but somehow, I didn’t. Moore does a great job giving the reader small clues throughout so the secret isn’t explosive, but it is impactful.

Joli: Loved it! This book kept me guessing. I really didn’t expect a lot of the twists and turns, which made it a page-turner for me. I too loved how Moore leaves subtle clues, but she doesn’t give quite enough for you to predict all of what’s coming. I really loved her writing style and the way she weaved the story together, with some jumps in time to older Ada.

Q: Is there anything you didn’t like about the book?

Janna: I know I said I liked the slow pace, but the book was massive (it was 450 pages). A few things could have wrapped up more quickly and the last few chapters felt unnecessary. Overall though, I really enjoyed this and would recommend it to others.

Joli: I agree with Janna! My only beef is with the very last chapter. I don’t want to give anything away, so it’s hard to talk about it much, but it kinda shifts the perspective of the entire book. I really felt like that last chapter just wasn’t necessary and shouldn’t have been there. I did really like this book though, overall. And Janna, I agree – recommended for others!