Sink into a good book.
On Writing & Blogging 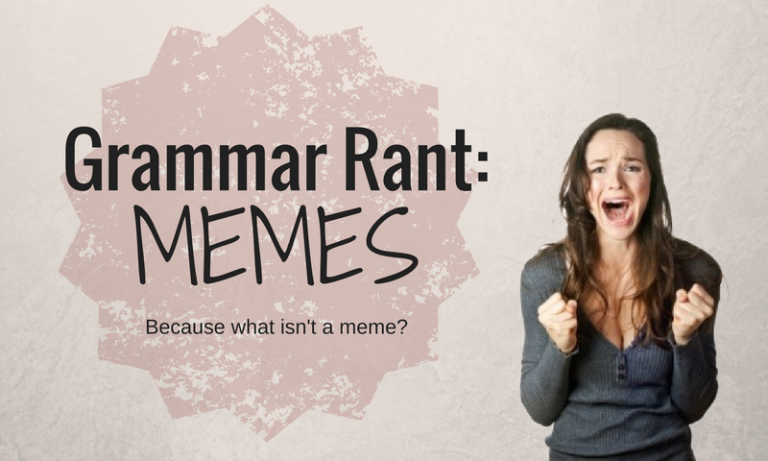 Memes are everywhere. They are a cultural phenomenon. Webster’s dictionary describes a meme as “an idea, behavior, style, or usage that spreads from one person to another in a culture” or an amusing or interesting picture, video, etc., that is spread widely through the Internet.” You cannot escape the memes.

Generally speaking, I don’t have a problem with memes that are in good taste…or at least aren’t blatantly offensive. Many are highly amusing and well done, so kudos to all you funny folks out there! That said, what gets my goat is A) the poor grammar used in a vast majority, and B) the way we are beginning to speak in “meme” and think in “meme”.

Starting with point A, let me say that I could easily dig up 100 memes and rant about the grammar of each one. Rather than write a dissertation, I’m focusing on three broad aspects. First is the fact that the text included on images is rarely a full sentence. I argue that many are not even full thoughts. Second is the atrocious use of – or lack of – punctuation. I understand these are short snippets of text if not more of a “title”, but is it so hard to put a question mark or period at the end? Commas are a whole separate battle, but end punctuation leads to my third and final gripe. Memes often leave us hanging. Is it a question? Is it a statement? What does “when bae walks toward you” really mean?! (See side rant on terms like “bae” here.)

Ok. So memes aren’t grammatical masterpieces. I do my best to live with that. What rankles me though, is that people are using these meme phrases in real conversations. Even I find myself doing it! Now those grammatical errors are being perpetuated forward. Children are hearing them. This shortened, incorrect language is allowed because of its “origin” and soon, that origin will be forgotten and the curtailed phrases will live on. Not only that, but as an extension of the selfie era, people are on the lookout for situations that can become memes! They will create images just for the point of memes which feels sacrilegious, and they’ve missed out on whatever experience they were supposed to be living!

Perhaps I am just too out of sync with society, young people, and/or seeing bad memes. If you care to try and dissuade me on any of  my points, please do! I would love to laugh at good memes and be proven wrong! Share your best attempts in the comments below! In the meantime, I will leave you with my favorite graphic that resulted in my search for memes.

4 Books to Jumpstart Your Novel

Starting a Reading Journal: The How & Why,...

10 Questions to Ask Yourself to Get Your...