Audiobook Review: The Boys in the Boat 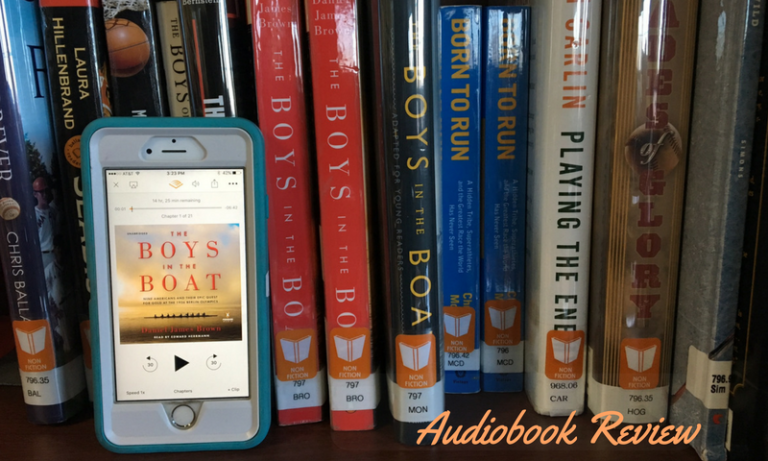 I’ve been meaning to read The Boys in the Boat: Nine Americans and Their Epic Quest for Gold at the 1936 Berlin Olympics by Daniel James Brown since it came out in 2013. My students have been loving both the young readers’ version and the original, and I’m a sucker for a great sports story. When I recently found that Edward Herrmann of Gilmore Girls fame narrated the audio version, I downloaded it stat. Herrmann also performed Unbroken, the audiobook that truly made me a lover of narrative nonfiction. So, I couldn’t wait to press play on The Boys in the Boat.

While the country remained in the grips of the Great Depression, young Joe Rantz coped with the death of his mother and abandonment of his father. Joe took hard-labor jobs in small-town Washington state in hopes making enough to attend the University of Washington. A lanky, self-conscious kid, he showed up at the Washington crew house in 1933, hoping for a spot in the freshman shell. So began a glorious, arduous, roller-coaster rowing career that led him and eight other hard-scrabble guys to the 1936 Berlin Olympics. Interspersed with the stories of Rantz, his crewmates, and his coaches, Brown paints the rise of the Nazi regime in Germany. The author offers a particular focus on filmmaker Leni Riefenstahl, the woman behind the propaganda films – marching, waving flags, a stiffly upright Hitler lording over thousands – that illustrate Hitler’s surge to power. Brown describes Riefenstahl’s particular shots and techniques, as well as her rocky collaboration with Nazi propagandist Joseph Goebbels.

The two stories – one a quintessential example of the strength of the American Dream, and the other a chilling and sinister reminder of the failings of human nature – alternate and build throughout the book to create a contextualized, emotional reading experience.

Brown’s writing is deeply accomplished. Stunning, really. He fosters empathy for Rantz, his primary subject, by chronicling each major event in his life alongside his rowing career. I particularly enjoyed Brown’s portrayal of Rantz’s devotion to Joyce Simdars, the love of his life, whom he met when he was just a kid in rural Washington. That said, perhaps most remarkable about this work is the suspense Brown builds in each individual crew race. He recounts, stroke-by-stroke, the boys’ wins and losses. I sat in the driveway or in parking lots a number of times while listening, unable to leave my  minivan before the boats crossed the finish line. My twelve year-old son sat next to me on his iPhone, double checking results of these eighty year-old races before Brown could finish the chapter.

Sublime. As narrators go, Herrmann ranks among the best I’ve heard. He emotes without condescension or smarm. Nothing in his performance – not even the closest of crew races – seems overdone. Herrmann conveys warmth and sincerity, and listeners get the sense that he’s as swept away by the story as we are, only he’s read it before.

Well, it’s obvious I loved this book. It appealed to my sense of adventure, my love of the underdog, and my desire to believe that the good guys generally win. If you like narrative nonfiction and you haven’t read this, hurry up! If you don’t think you like narrative nonfiction, this is a book that could change your mind, like Unbroken did for me.

The Boys in the Boat was one of the best literary surprises of my life. I never thought I’d like it so much! Nice to know it’s just as great on audio.

I loved this too! I’ve never read nonfiction that read like an actual story. And I agree, Brown was amazing at building momentum and excitement with his writing. Love that your son was looking up race results on his phone!