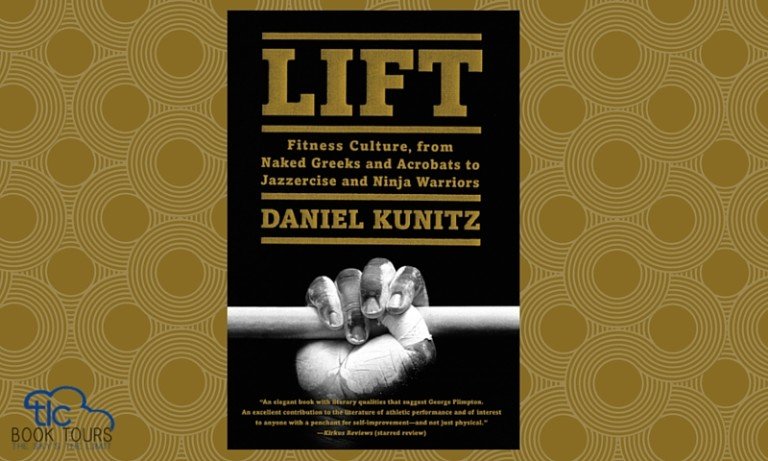 Thanks to TLC Book Tours for the chance to read and review Lift!

I should preface by saying last year, I decided I was going to try running. I downloaded the Couch to 5k app on my phone and made it through the exercises! That is, until the day I had to run for 20 minutes straight with no walking break in the middle. My running career ended that day and I’ve gone back to walking and the stationary bike (you can totally read while biking) as my main forms of exercise. All this to say it was probably an odd choice for me to read Lift: Fitness Culture, from Naked Greeks and Acrobats to Jazzercise and Ninja Warriors.

I found this book fascinating and extremely boring all at once. Lift is an extensive history of fitness culture, starting with the Greeks and working its way to today. It reads like a history book too, which makes it dry and slow at times. When Kunitz uses personal narrative mixed with the history, the rhythm is better, but it took me a month to slog through. I typically read a book in two weeks or less.

With that said, I did take away a lot of new knowledge and appreciation for fitness and exercise and its history. For instance, strenuous exercise of any kind was advised against BY doctors until as late as the 1970s!  If people worked out at all, they typically performed calisthenics, which can be thought of as exercise related to jumping jacks, sit-ups, lunges, pull-ups, etc. Only recently has it become acceptable for both men and women to head to the gym without commentary. Even now, being “too jacked” can be seen as undesirable for both men and women.

Kunitz argues that until recently most exercise has been contained to a gym, but the culture is shifting. People are looking for options outside the gym and away from weight machines. Kunitz proposes that CrossFit and other related forms of exercise, including Parkour and the ninja warrior/obstacle course craze are the answers. And while I do agree (ya know since I’m an expert) that all of these have hit some sort of mainstream popularity, I’m not convinced that these three examples are the end all be all when it comes to today’s fitness culture. It’s clear that Kunitz is an avid fan of CrossFit; he mentions it at least once every few pages. If you don’t know, CrossFit has garnered a lot of criticism from athletes, their trainers, and those in the medical field because of its high risk for injury and lack of training for coaches. You can tell Kunitz tried to take a neutral stance on CrossFit, but his inability to hide it or offer an unbiased approach to modern fitness culture kind of ruined his credibility for me.

Overall, I found some aspects of Lift  informative and provoking. I’ve actually brought this book up in conversation more than once since I finished it a week and a half ago. But, I also have some pretty deep seated issues with the author’s credibility because of his personal ties to CrossFit. While everyone is entitled to their personal opinion, it doesn’t seem like the appropriate place to share in a book like this. If you are super interested in fitness, exercise, and the culture that surrounds it, then I think you’d find aspects of this book worthwhile. Otherwise, skip. This was a 2.5/5 for me.

Yeah I think I’d have quit running if I had to do a 20 minute run with no walking break … I’m just not cut out for that kind of thing!