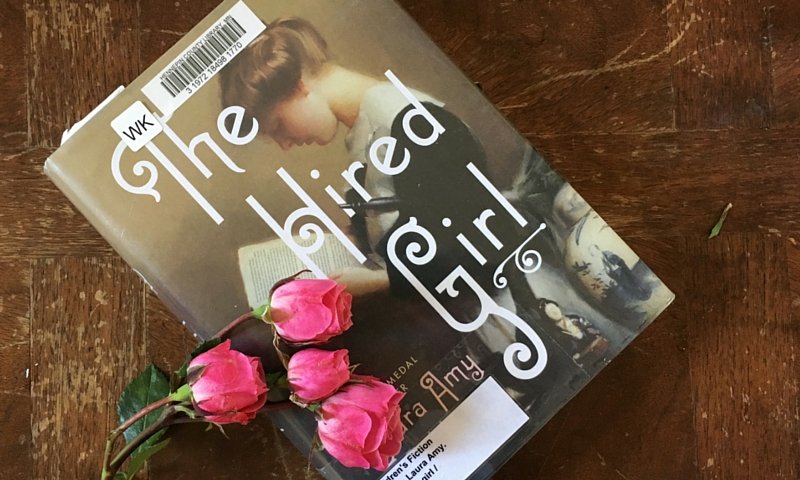 In 1911, fourteen year-old Joan Skraggs finds herself trapped at home on a run-down farm, working tirelessly for her cruel father. He pulls her from school and requires her, “an ox of a girl” and “ugly” in his estimation, to mend, cook, iron and scour for him and her brothers without any hope for a brighter future or personal reward.

Emboldened by both a visit from a beloved former teacher and the discovery of a surprise legacy from her deceased mother, Joan executes an escape to the big city of Baltimore with the aim of becoming a “hired girl,” a housemaid for a well-to-do family.  Lucky for her, she’s plucked from a park bench by just the right advocate, Solomon Rosenbach, the son of a department store owner whose family is looking for a servant to assist their aging and cantankerous housekeeper, Malka.

I’ll cut to the chase and tell you that I flat-out loved this book.  It’s in the vein of the Brontë classic, Jane Eyre, which author Laura Amy Schlitz references many times in the narrative. Joan engages in a journey of self-discovery. She consistently evaluates her personal values and compares herself to romantic heroines – the girls in the novels she reads late at night in Mr. Rosenbach’s personal library.  “I believe ladies should vote and be doctors and maybe even be president,” Joan pronounces, “but they should stay tidy and not perspire.” The Rosenbach library and the conversations she has there with her employer also open a world of knowledge to Joan about literature, religion, Anti-Semitisim, and class differences. Although she’s devoted to her job, she doesn’t plan to stay. “The truth is,” Joan says, “most of the time I don’t think of myself as the hired girl. I think of myself as a somebody disguised as the hired girl. After all, I’m not going to be a servant all my life. It’s temporary.”

Her ambition begs trouble, of course, as cleaning house will never satisfy her bright mind and desire for romance. “Nothing interesting ever happens to me,” she laments, “because that is not my destiny.”  While she may believe this to be the case, she’s continually drawn to excitement. She falls in love with art and opera, revels in spending her own money at the Rosenbachs’ department store, and fosters an ill-advised romantic connection that could jeopardize her position.

Schlitz writes with compassion and humor, bringing Joan to life through her diary entries, which is how we come to know her story. Joan (“a real Joan,” says a key character, comparing her to Joan of Arc, “full of imagination and the spirit of revolt”) won a place in my heart with her charming naiveté and guileless wit.  Although I found this 2015 book in the children’s section of my local library, it’s got wide appeal: teens and adults, especially those with a penchant for 19th century British and American lit, will fall quickly in love.

You’ll like it if: You love a novel that investigates the inner life.

Maybe not so much if: Historical plucky girls and their daily dramas aren’t your thing.