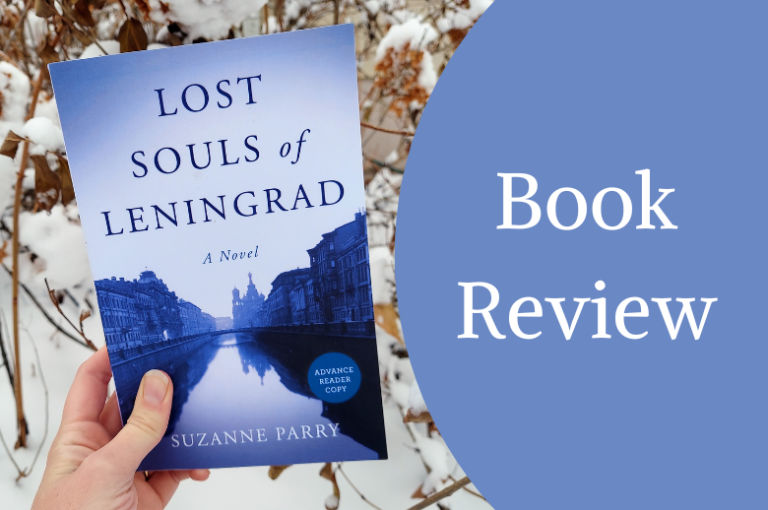 I have so many feelings about Lost Souls of Leningrad…I will try to puzzle them out in my review below!

June 1941. Hitler’s armies race toward vulnerable Leningrad. In a matter of weeks, the Nazis surround the city, cut off the food supply, and launch a vicious bombardment. Widowed violinist Sofya Karavayeva and her teenage granddaughter, Yelena, are cornered in the crumbling city.

On Leningrad’s outskirts, Admiral Vasili Antonov defends his homeland and fights for a future with Sofya. Meanwhile, Yelena’s soldier fiance transports food across the Ice Road–part of the desperate effort to save Leningrad. With their help, the two women inch toward survival, but the war still exacts a steep personal price, even as Sofya’s reckoning with a family secret threatens to finish what Hitler started.

Equal parts war epic, family saga, and love story, Lost Souls of Leningrad brings to vivid life this little-known chapter of World War II in a tale of two remarkable women–grandmother and granddaughter–separated by years and experience but of one heart in their devotion to each other and the men they love. Neither the oppression of Stalin nor the brutality of Hitler can destroy their courage, compassion, or will in this testament to resilience.

Alright, so first of all, this book is beautiful, and very, very bleak much of the time. However, try not to let that scare you off, because the beautifulness and moments of emotional clarity were so good!

There’s no sugarcoating the fact that this book is hard to read at times. It’s set in Russia in a time when Russia was at war and Leningrad became completely cut off by the Germans, and was unable to receive supplies. There was no electricity, so no heat and no food for an entire winter in frigid Russia, and thousands upon thousands starved in Leningrad. If you can go into reading this one knowing that that’s what you’re going to encounter, I think you might be better prepared than I was.

I do also have to give a content warning for this one about children and death/trauma. There was a part that snuck up on me that made me have to take a pause.

HOWEVER, through all of that bleakness and the worst possible circumstances, there are these lasting relationships and bits of love and redeeming moments that just turn this book into something you want to read, and they’re why this book is getting great ratings.

Sofya and Yelena come to rely on each other not just for love, but for survival. Only by living together and supporting one another are they able to survive the horrible conditions. And somehow? There’s hope. They have hope that their loved ones out fighting the war are okay, and that they’ll come back to them. They have hope that soon, the Germans will be defeated and regular life will return. It’s all this hope and love that carry the whole book through the bleakness.

I feel like I somehow haven’t done this book justice, but I hope you can understand what I’m trying to convey. Beautiful story, hard story. 4.5 stars.