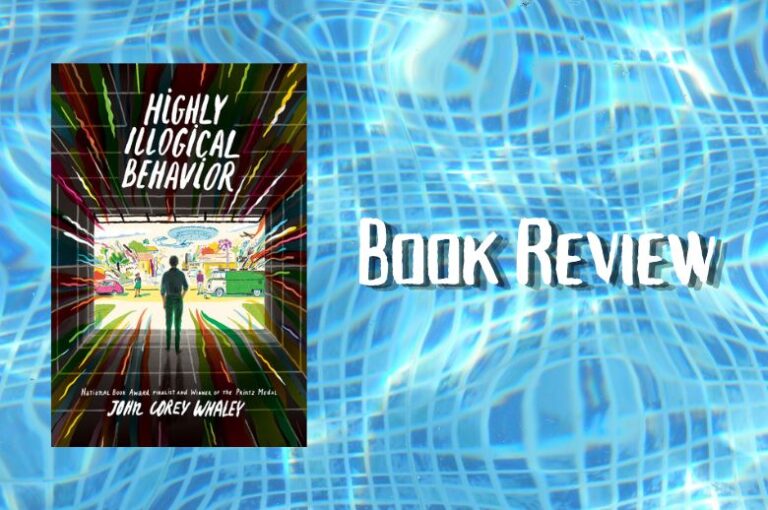 Highly Illogical Behavior tells the story of Solomon Reed, a 16-year-old boy who likes Star Trek and the board game Munchkin. He also happens to be agoraphobic. After a severe panic attack led to Solomon stripping down and laying in the fountain in the middle of his school, he decided that avoiding things that make you panic seemed like a valid solution.

Lisa Praytor is a 17-year-old girl whose only goal in life is to get into the second-best psychology program in the country. (She wants to be realistic, so she doesn’t try for the best.) When Lisa realizes that she doesn’t have much experience with mental illness, she decides to seek out Solomon Reed, the boy who had a “nervous breakdown” in the fountain a few years prior. She’s convinced that if she can “fix” him, she’ll be able to write an acceptance-worthy essay.

My Review of Highly Illogical Behavior

When I saw Highly Illogical Behavior on the shelf at Barnes and Noble, I knew I had to have it. The cover is beautiful, and I’ve made it my personal mission to own as many YAMI (Young Adult Mental Illness) novels as humanly possible.

I’ll be honest; I don’t know a ton about Agoraphobia. It’s not one of the mental illnesses I’m super familiar with. Because of my lack of knowledge, it’s hard for me to determine if the illness was portrayed accurately or not. However, given that Whaley wrote the story based on his own experience with severe panic disorder, I feel that the author did his due diligence to ensure the story wasn’t exaggerated. While we did witness Solomon having severe panic attacks, some of which even included self-harm in the form of slapping himself, Whaley cut out most of the drama that we see in Hollywood movies about agoraphobes.

A couple of things that I didn’t like about the book (Minor spoilers):

One thing that I admire about Highly Illogical Behavior is the presence of Solomon’s parents. In YAMI novels, we often see parents portrayed as absent or abusive. By including parents who support Solomon and do their best to understand him rather than “fix” him, Whaley acknowledges that mental illness isn’t always a direct result of poor parenting. In fact, in one interview, Whaley says that his entire goal was to “show that there are good parents that exist.”

I also enjoyed Whaley’s descriptions of anxiety/panic attacks. He refers to them as “feeling loopy,” which is a great explanation. Whaley depicts Solomon’s anxiety attacks as exactly that – attacks. There’s no romanticizing, no “but look how I grew from this.” Instead, he says it how it is: It sucks. He shows what it’s like to have to hide your panic from your friends, but he also characterizes Lisa as patient and understanding. She helps Solomon count to ten through the panic attacks and reminds him that there’s nothing to be embarrassed about. Clark, on the other hand, is unsure of what to do when Solomon begins panicking. In most cases, he just pretends the panic attack isn’t happening. While Clark’s response isn’t the best one, it is a realistic one. If the book only had characters who knew perfectly how to act when someone was having a panic attack, I would be taking half a star off of my review for lack of realism.

Most of these content warnings are consistent with what we see in Young Adult literature nowadays, but here they are nonetheless.

Have you read Highly Illogical Behavior yet? When you’re finished with it, check out my review of Take Me With You When You Go to see if it’s a good fit for your next read.