Book Review: Take Me With You When You Go 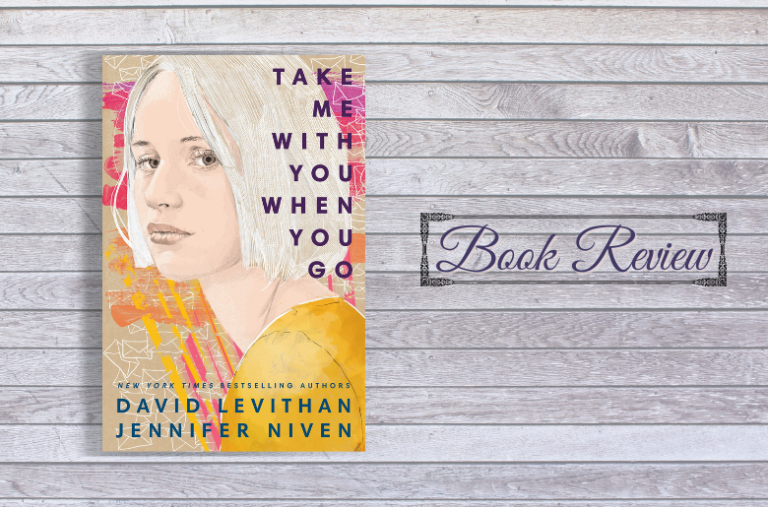 The captivating first lines of this novel are sure to draw you in. Keep reading to hear my thoughts on Take Me With You When You Go by Jennifer Niven and David Levithan!

Take Me With You When You Go tells the story of Ezra and Bea Ahern, a brother and sister who live a difficult life. When Bea runs away, she leaves an email address for her brother to contact her. The whole novel is told through a series of emails exchanged between the two siblings. Their abusive home situation is why Bea left in the first place, and Ezra is left to deal with their abusive stepfather and neglectful mother.

Meanwhile, Bea is on her own mission. A mysterious message sends her running to an unknown city, chasing a ghost from her past. Bea digs deeper into her family’s history, uncovering secrets that may change the siblings’ future.

My Review of Take Me With You When You Go

I had high hopes for Niven’s latest novel. I anxiously awaited the book’s release and began reading it as soon as I got my hands on it.

The first hundred-ish pages of this book kept my attention, but then I got a bit bored. I put it down for a couple of weeks. The story finally picked up again around page 300, but I was disappointed that there wasn’t more to keep me reading in the first place.

Although the plot itself fell a bit dry for me, I enjoyed the book overall. The character development made the characters seem human, and the short chapters made the book easy to read in my limited spare time.

One thing I appreciated is that the authors don’t shy away from the painful reality of domestic abuse, nor do they romanticize it. They also make clear that domestic abuse, specifically child abuse, is far more common than one may think. The heartbreaking reality is that every day, approximately 5 children die from abuse or neglect. Niven and Levithan address the topic head-on, adding a side character who has also suffered abuse at home.

The romance in the novel was a nice change from the typical YA novel. Instead of stuffing the story to the brim with romantic gestures and devastating heartbreaks, the authors chose to show the everyday side of relationships. Ezra’s boyfriend, Terrence, supported Ezra throughout the novel, even though his mom referred to Ezra as “Terrance’s friend.” Bea’s relationship, which isn’t introduced until late in the story, is fairly bland, but somehow not boring. It’s nice to see a relationship represented as two people simply spending time together instead of as a fairytale romance with roses and late-night conversations.

The real love that tugs on your heartstrings in this novel is the bond between Bea and Ezra. They bicker as most siblings do, but you can tell that they rely on each other for support. When Bea leaves Ezra behind, Ezra is heartbroken and unsure how to function without his older sister to protect him. At first, I thought Bea was a terrible person for not taking Ezra with her, but she had her reasons, and I learned to love her by the end of the novel. Ezra alternates between anger and acceptance. He’s proud of his sister for finding herself throughout her journey, but it’s clear that he misses her.

Overall, I would recommend this book. You may need to set it down between chapters, but don’t give up on it. The ending is worth the journey.

Despite the content warnings below, I think this book should be present in YA libraries throughout the country. Levithan and Niven address the reality of domestic abuse, reminding readers that they’re not alone and there are resources to find help. They include a list of domestic abuse hotlines/websites at the end of the book, as well as social media handles where kids can find support.

If you’re looking for a new read, check out our other book reviews to find a title that suits your needs!

Take Me With You When You Go
David Levithan and Jennifer Niven
Young Adult Fiction
Knopf Books for Young Readers
August 31, 2021
322
I would recommend this book to othersLGBTQYAYA fiction
Share 0 FacebookTwitterPinterestEmail