10 YA Books About Living With Mental Illness 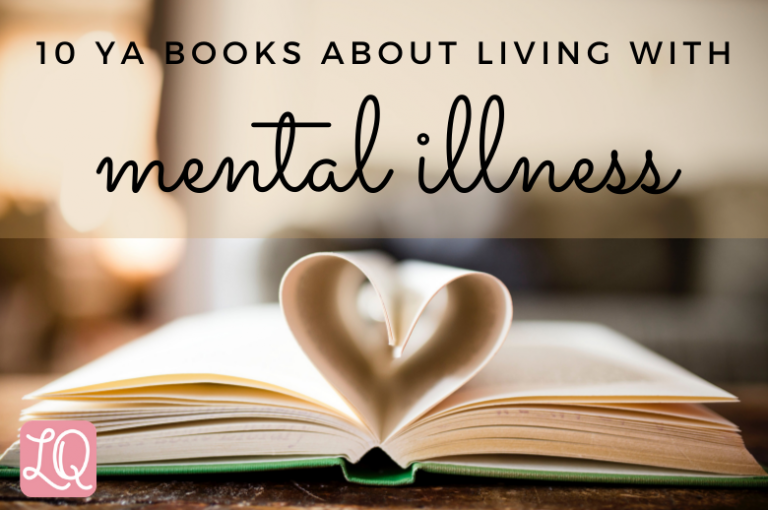 Mental health is a topic of prime concern these days, especially for kids and teens who may have spent much of the last year in isolation, cut off from peers and in-person school. Reading a book with a protagonist struggling with their own mental health can be a great way to feel understood as well as gain empathy for those dealing with mental illnesses. In the books below, some characters are dealing with their own mental health diagnoses, while others are trying to support a loved one through their struggles or dealing with the after-effects of their loss. No one book can cover the spectrum of what it means to experience a mental illness, but the stories listed here will hopefully help readers feel seen and understood.

Please note that many of the stories below deal with heavy topics including: suicide, disordered eating, and obsessive behaviors.

Turtles All the Way Down by John Green

John Green’s own struggles with anxiety were part of the inspiration behind this book, which deals realistically with issues of anxiety and obsessive behaviors in adolescence. Aza Holmes is often trapped in a spiral of anxious thoughts and behaviors, which leads her to feel increasingly overwhelmed and isolated. When the wealthy father of Aza’s childhood friend disappears and a cash reward is offered for information about his disappearance, Aza teams up with her friends to try and find out what happened. Throughout the book, the realistic and thoughtful portrayal of Aza’s mental health is combined with this mystery in a natural way.

Darius the Great is Not Okay by Adib Khorram

Darius is nervous when it’s time to take his first-ever trip to Iran and meet his extended family. Though Darius has a great knowledge of fantasy worlds, he struggles to make friends and connections in the real world. Between coping with clinical depression, dealing with a disapproving father, and always feeling left out, he doesn’t expect that this trip will change much for the better. But then he arrives in Iran and meets the neighbor Sohrab, who makes Darius feel like he belongs for the first time. When it’s time for Darius to go home, can he take new discoveries about himself with him?

Told in journal format, this YA book addresses the aftermath of the suicide of a young woman named Ingrid through the eyes of her friend Caitlin. After Ingrid is gone, Caitlin finds a note she left for her in her journal and begins writing about her own experiences of grief. This is an intense portrait of friendship, loss, and rediscovering hope.

History is All You Left Me by Adam Silvera

Even though Griffin and Theo broke up and Theo moved to California and started dating Jackson, Griffin believed they would get back together one day. Instead, Griffin receives the news that Theo has died and it causes him to begin showing obsessive compulsions and make destructive choices. The only one who can understand Griffin’s loss is Jackson, but reaching out to him seems like an impossible hurdle to overcome. Silvera drew on his own experiences for this thoughtful portrayal of losing a loved one and how it can impact your mental health.

Solomon is agoraphobic and hasn’t left the house in three years. Lisa is a high schooler determined to get into the psychology program of her dreams. Lisa and her boyfriend Clark decide that if they can get Solomon out of the house, she’ll have a “project” to present as part of her application. But each character in the story has more to them than is first seen and soon the three of them have built a strong friendship that might be able to overcome the walls they’ve each put up around their inner lives.

The Astonishing Color of After by Emily X.R. Pan

This YA book explores the line between reality and fantasy in the life of Leigh, a teenager who has recently lost her mother to suicide. Leigh is half-Asian and half-white and is taking her first trip to Taiwan in the aftermath of her mother’s death. There, she meets her maternal grandparents for the first time and dives into a world that straddles the line between the living and the dead. This is a story of family secrets, ghosts, first loves, and grief.

How it Feels to Float by Helena Fox

Biz is just barely managing to stay above the surface, to, as she thinks of it, “float”. All around her she sees people going about their lives: her mom, her friends, the twins, and the other kids at school. She also hears the voice of her dad, who died when she was six. Biz is just barely staying afloat, but then her dad’s voice disappears and Biz begins to come undone.

Eliza and Her Monsters by Francesca Zappia

Eliza Mirk lives between two worlds. Online, she is Lady Constellation, the confident creator of the Monstrous Sea webcomic. Offline, she is shy and anxious, especially in social situations. Eliza much prefers her online world but when Wallace, Monstrous Sea’s number one fanfic writer, enrolls at her high school, the two realms threaten to overlap. Will Wallace help Eliza come out of her shell?

Life Inside My Mind edited by Jessica Burkhart

Thirty-one YA authors write about what’s going on inside their heads in this essay collection. By sharing stories about diagnoses from ADD to PTSD and letting readers see the personal impacts of mental health on day-to-day life, these authors are working to end the stigma around mental illness and help readers know they are not alone.

Through essays, comics, lists, and illustrations, a collection of thirty-three writers explores mental health and how it affects our everyday experiences. Covering a variety of experiences, this book tackles the stigma of and discussion around “being crazy” head-on and encourages readers to start their own conversations. A great book for anyone looking to start an open conversation about mental health and how it’s treated in our society.

Have you read any YA books recently that tackle hard topics? We’d love to hear your suggestions in the comments or over on Instagram, find us @literaryquicksand.

Also, Under Rose-Tainted Skies by Louise Gornall does such an AMAZING job of portraying a teenage girl with severe OCD (plus anxiety, agoraphobia and other mental health disorders) Norah’s mind is the perfect example of how challenging and exhausting living with a mental disorder is.