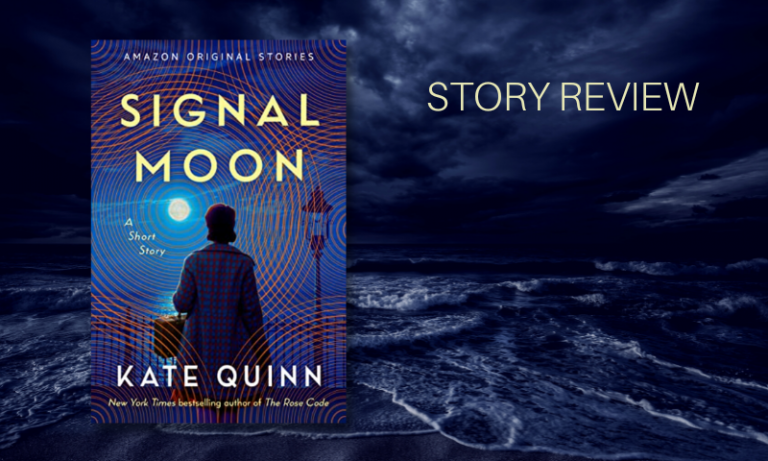 Yorkshire, 1943. Lily Baines, a bright young debutante increasingly ground down by an endless war, has traded in her white gloves for a set of headphones. It’s her job to intercept enemy naval communications and send them to Bletchley Park for decryption. One night, she picks up a transmission that isn’t code at all—it’s a cry for help. An American ship is taking heavy fire in the North Atlantic—but no one else has reported an attack, and the information relayed by the young US officer, Matt Jackson, seems all wrong. The contact that Lily has made on the other end of the radio channel says it’s…2023.

Across an eighty-year gap, Lily and Matt must find a way to help each other: Matt to convince her that the war she’s fighting can still be won, and Lily to help him stave off the war to come. As their connection grows stronger, they both know there’s no telling when time will run out on their inexplicable link.

She just wrote until her hand burned and listened til her ears bled, the entire person and essence of the Honorable Lily Baines stripped down to a pair of ears and a pair of hands.

Why I Chose This Book

I love Kate Quinn. Her books are captivating, detailed, so well-researched and yet…accessible. Every time I read one of her works, I am immersed into the story. She has the ability to put you in a moment and connect you with the atmosphere. Her characters are believable, genuine and layered. That said, I am not a short story person. If I’m going to invest my time, energy and emotions into a story, I want it to be more than 40 pages! So, I was a bit skeptical and hesitated slightly before picking this up. I think you’ll find I was very glad I did!

She could quip and joke all she liked, but in truth, she was terrified.

Why did I hesitate?! I knew this would be amazing, just like all of Kate Quinn’s other pieces! The writing is – as usual – superb; the characters, rich. Signal Moon packs in the historically accurate (and educational!) details without feeling like a textbook. This feels like a story Quinn cares about. I’m not sure I ever thought I’d say that you can feel the passion for the story, but really, you can! There is some sort of connection developed with these characters that to my logical and realistic brain seems absurd, but it is there and I felt it. I’ve said it before and I’ll say it again I’m sure…Kate Quinn is some sort of magician! My only complaint is I wanted the impossible movie ending!

Matt pulled on his headphones just as she pulled on hers, and the two of them kept hunting.

Do yourself a favor and read Signal Moon. It won’t take you long, and it packs the punch of a full length novel. Any fans of Kate Quinn’s previous WWII era tales will love this, and anyone new to her work will want to immediately add The Alice Network and The Rose Code to their must-read lists as soon as they finish this story. There is some adult language, so I do recommend a mature audience. Even if you – like me – think that short stories aren’t really “your thing,” this has elements of romance, intense drama, family dynamics, mystery, intrigue, war and battle. I could go on, but truly this has elements well-suited for fans of many genres.

Of doubt and dark they feed their nerves;
The signal moon is zero in their voids.

Kate Quinn is the New York Times and USA Today bestselling author of many historical novels, including The Diamond Eye, The Rose Code, The Alice Network, and The Huntress. A native of Southern California, she received her bachelor’s and master’s in classical voice from Boston University before turning her focus to writing fiction. Her books have been translated into multiple languages, and The Alice Network was featured as a Reese Witherspoon Book Club pick. Quinn lives in San Diego with her husband and three adorable rescue dogs.

This was one of my top reads of 2022! Like you, I’m also a HUGE Kate Quinn fan. The Alice Network and The Rose Code are two of my favorite books, and Signal Moon came in hot on their heels. Another phenomenal story from an incredible author!