Review: The Couple at Causeway Cottage by Diane Jeffrey 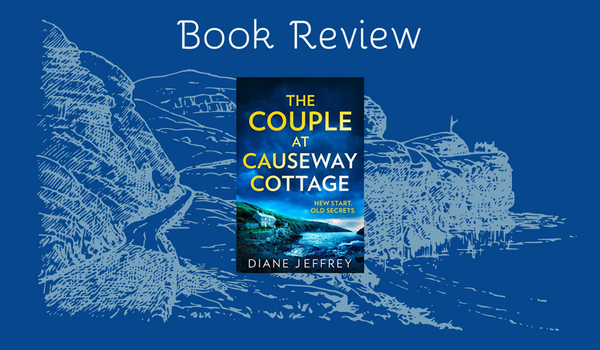 Have you ever read a book that gave you the shivers? A creepy thriller you just couldn’t put down? That’s exactly how I felt about The Couple at Causeway Cottage by Diane Jeffrey.

Kat and Mark move to an island off the Northern Irish coast for a new beginning. Far away from their frantic life in London, it’s the perfect place to bring up the family they’re longing to start.

But as soon as they arrive, cracks begin to appear in their marriage. Mark is still texting his ex-wife. Kat is lying about a new friendship. And one of them is keeping an explosive secret about the past.

Diane Jeffrey has written a terrifyingly creepy thriller that stays with you long after you’ve put the book down. I couldn’t get this story out of my head for days!

The Couple at Causeway Cottage is a captivatingly dark thriller that’s bursting at the seams with secrets. We are told the story from Kat’s point of view: Why her and her husband have chosen to move away from London, how she settles into her new community, the strange things that seem to keep happening in her home…

There’s an uneasy feeling from the start of the book. You’re not 100% sure that Kat is safe in her new home, a remote cottage in Northern Ireland. I had a niggling in the back of my mind the entire time that something wasn’t right, something bad was going to happen…

I’ve read a couple of Jeffery’s books and I really enjoy her writing. Her writing style is dynamic, it maintains its pacing and momentum during the story. Jeffrey doesn’t reveal too much too soon, she drops small, subtle hints throughout to keep you guessing.

I adored Jeffrey’s descriptions of the Northern Irish coastline. The unpredictable weather in this part of the world creates a tense and eerie atmosphere, and these feelings spill over into the story line.

I did NOT see the key to the big reveal coming. The jaw-dropping revelation of the connection between the 3 main characters was wild. While the link is relatively complex, Jeffrey paces the explanation well and you don’t feel overwhelmed by all of the shocking information being revealed.

My favourite part of the book was Kat’s response to arguably the most shocking event of her life so far quite amusing: Portioning up dinner and cleaning the dishes before she leaves 😂 This part brought out the darker side of my humour and I really appreciated a little light relief in the middle of a rather creepy story.

If you’re looking for a thriller that’ll give you goosebumps, THIS IS THE BOOK FOR YOU!

⭐️⭐️⭐️⭐️ from me, this was a fantastic book!

I was hesitant to read this book. I guess I’m going to give it a try

It’s a captivating story, I finished it in a couple of days.
I’d love to know what you think!
Catherine