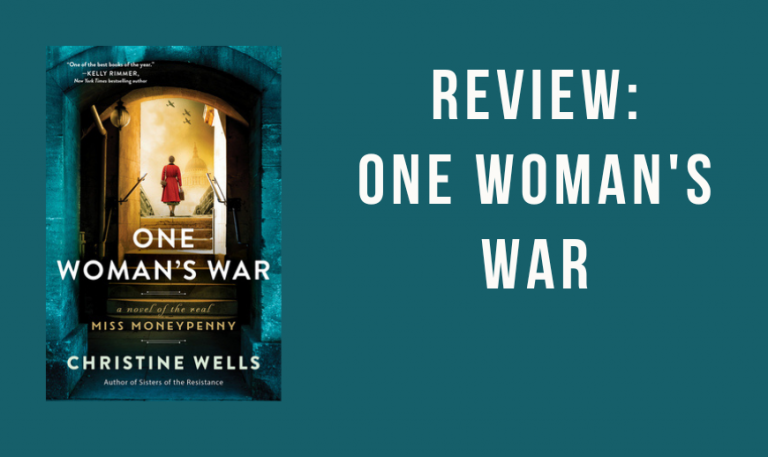 As a lover of historical fiction, I was excited to dive into this unique take on the British intelligence services during World War II. Read on to hear why I would recommend One Woman’s War!

World War II London: When Victoire “Paddy” Bennett first walks into the Admiralty’s Room 39, home to the Intelligence Division, all the bright and lively young woman expects is a secretarial position to the charismatic Commander Ian Fleming. But soon her job is so much more, and when Fleming proposes a daring plot to deceive the Germans about Allied invasion plans he requests the newlywed Paddy’s help. She jumps at the chance to work as an agent in the field, even after the operation begins to affect her marriage. But could doing her duty for King and country come at too great a cost?

Socialite Friedl Stottinger is a beautiful Austrian double agent determined to survive in wartime England, which means working for MI-5, investigating fifth column activity among the British elite at parties and nightclubs. But Friedl has a secret–some years before, she agreed to work for German Intelligence and spy on the British.

When her handler at MI-5 proposes that she work with Serbian agent, Dusko Popov, Friedl falls hopelessly in love with the dashing spy. And when her intelligence work becomes fraught with danger, she must choose whether to remain loyal to the British and risk torture and execution by the Nazis or betray thousands of men to their deaths.

Soon, the lives of these two extraordinarily brave women will collide, as each travels down a road of deception and danger leading to one of the greatest battles of World War II.

As I’ve touched on in past reviews, there’s a lot of historical fiction out there that tackles the perspectives and experiences of women during World War II. This story is no exception, though it focuses mostly on events within Britain, rather than in direct combat. Even though there may be many other books in this sub-genre, I felt that One Woman’s War stands out for the well-constructed main characters, solid research, and unique connection to the story of Miss Moneypenny.

One of the first things that drew me into Wells’ writing was the unique main characters she gives us in Paddy and Friedl, and how the two women were so different but still ended up with interconnected stories. While I do feel like the historical fiction genre is somewhat saturated by alternating point of view stories right now, each of these characters was both delightful and different enough for me to be equally interested in both of their stories.

While Paddy comes into the story with a common backstory of the dutiful, British, young woman who has been raised with certain expectations and strictures, Friedl represents a much more glamorous, and dangerous, lifestyle. This contrast lets us see multiple sides of the intelligence work that was going on at this time: via Paddy, we learn about the frantic pace and rigid rules of the military intelligence officers, while Friedl shows the heart-stopping adventures of a spy in the field.

I also liked the connection the book had as a back story to the character of Miss Moneypenny. Though I know there are many, many problems with vintage James Bond films, I have to admit a soft spot for them. Getting to hear more about Moneypenny (and Bond author Ian Fleming) put a new spin on a familiar setting and time period, and I especially enjoyed hearing more about the world of Bond from a female perspective. These sections, which are based on real people, are where Wells’ strong research skills and ability to blend fact and fiction really shines, and this makes the book a pleasure to read for history buffs and fiction fans alike.

Overall, I would recommend One Woman’s War to lovers of WWII-era historical fiction (and vintage James Bond) who are looking for a new spin on the sub-genre with a strong dash of espionage.