Review: If This Book Exists, You’re in the Wrong Universe by Jason Pargin 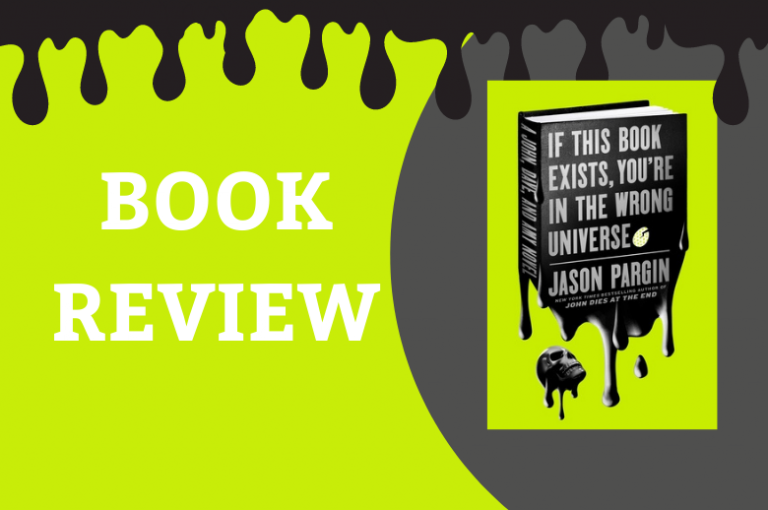 Today we’re welcoming a new guest contributor to LQ: Joli’s husband, Colin! He has read every book in the John Dies at the End series and was very excited to read the forthcoming 4th book in the series, If This Book Exists, You’re in the Wrong Universe early via NetGalley.

If the broken neon signs, shuttered storefronts, and sub-standard housing didn’t tip you off, you’ve just wandered into the city of “Undisclosed”. You don’t want to be caught dead here, because odds are you just might find yourself rising from the grave. That hasn’t stopped tourists from visiting to check out the unusual phenomena that hangs around our town like radioactive fallout. Interdimensional parasites feeding on human hosts, paranormal cults worshipping demonic entities, vengeful teenage sorcerers, we’ve got it all.

Did I mention the possessed toy? It’s a plastic football-sized egg that’s supposed to hatch an adorable, colorful stuffed bird when a child “feeds” it through a synchronized smartphone app. What’s actually inside is an otherworldly monstrosity that’s enticing impressionable wayward youth into murdering folks and depositing their body parts inside the egg as if it’s a hungry piggy bank to trigger the end of the world.

That’s where Dave, John, and Amy come in. They face supernatural threats so the rest of us don’t have to—and sometimes even earn a couple of bucks to so do. But between the bloody ritual sacrifices and soul-crushing nightmares, our trio realizes this apocalypse is way above their pay grade.

I may be in the wrong universe, but that’s okay because I got to read this book. It lives up to the expectations JDATA 1-3 promised with a story so cosmically, comically horrific, I am pretty sure it melted parts of my brain. Though I am not sure how a story of nearly (surely) nonsensical time travel across parallel universes, unfathomable monsters, and cutting edge mobile technologies can also have heart. Because somehow it does. For a book so out of this world, it is actually quite down to earth and tiptoes the lines between sci fi, fantasy, horror, comedy, and reality fantastically.

If This Book Exists, You’re in the Wrong Universe is a rollercoaster ride with weightless drops, loops, pits of destruction, and scythes for chopping off heads. Light-hearted, dainty, apologetic, for the faint of heart are not ways in which I would describe it. I would much prefer gruesome, gory, disgusting, disturbing, out of this world, and monstrous with sprinkles of comic relief. It can be read standalone, though in my opinion, getting to know the characters from the beginning definitely adds to the journey.

I assume those devilish entities are already shoving black goo and creepiness up their sleeves to wreak havoc on the world and trust J + D will be there when the Cosmos strikes again. Gotta keep it da filthy.

Colin is a Software Quality Engineer living in Minneapolis, MN and is married to LQ’s Joli. He loves to read from genres like comic horror, fantasy, and satire. His favorite authors include Stephen King, Neil Gaiman, Jason Pargin, Christopher Moore, and Terry Pratchett.