Review: Ways the World Could End by Kim Hooper 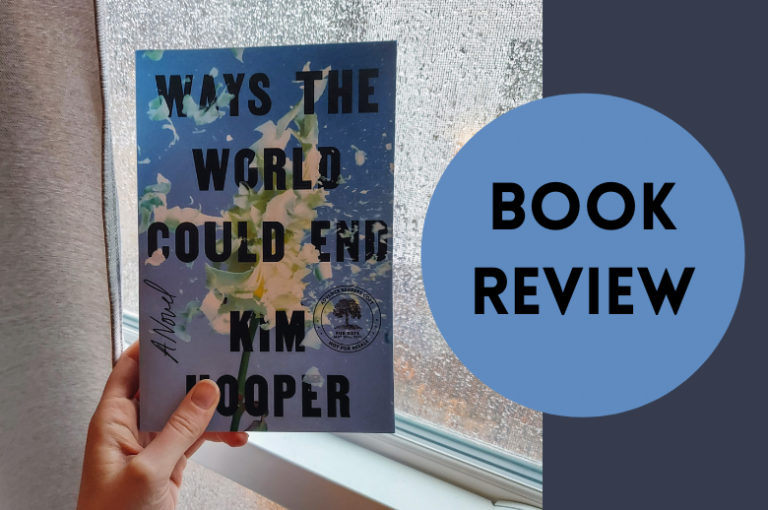 Dave is a Dad with Asperger’s.

They were both better off when Jana was around—Dave’s wife, Cleo’s mother. But now she’s not, and they are left to figure out life on their own. Dave dedicates his attention to his newfound hobby of doomsday prepping, researching the various ways the world could end. Cleo feels like her world already has.

Everything changes when neighbors move in, threatening their isolation in the hills of San Juan Capistrano. Cleo is intrigued by the new girl, Edie, and soon finds out the intrigue is mutual. Dave, not at all intrigued, is forced to come to terms with everything he cannot control.

As they struggle to live in the present, both Dave and Cleo must dare to revisit the tragic past they share. What happened to Jana? Who was she, really? Who are they without her?

Ways the World Could End is a story of grief, friendship, and love—the love between parents and children, between spouses, between teenagers, and between strangers. It is a story that requires us to consider the bounds of forgiveness, what we’re willing and not willing to forgive, and reminds us that often the hardest thing to forgive is ourselves.

This was my second Kim Hooper novel, and I absolutely loved No Hiding in Boise, so I was excited to get to read another of her stories. I actually have 3 more of hers on my shelves, and I don’t think it’ll be too long before I get to them, judging by how much I love her writing!

Ways the World Could End is a story with so much heart. Dave and Cleo’s relationship after losing Jana is just this tender thing that changes as the story goes on. I loved being inside Dave’s head as he thinks about his daughter, and about his relationship with the world in general. He ends up being a bit of a doomsday prepper, and that’s where the title of the book comes from. Each time Dave narrates a part of the story, he comes in with a way the world could end.

Kim Hooper gets grief and the aftermath it creates, and that comes across so clearly in her writing. It’s those day-to-day details after something so huge and life-changing happens that I can imagine are hard to capture in a story, but she does it so well. Having been through a couple big grief events myself, I appreciate this so much. Those little details are where life happens, and she gets those spot-on.

Cleo is just trying to figure out who she is, both on her own and as a daughter/friend/girlfriend. Such a tender age to lose her mom. I loved watching her grow throughout the novel, and also how she interacts with her dad, knowing he’s neurodivergent. The relationship building in this book was just awesome. It gave me all the feels.

If you like a really good character-driven novel every so often, I very highly recommend Ways the World Could End. It gets 5 stars from me!

Ways the World Could End
Kim Hooper
Keylight Books
May 10, 2022
5 starsautismfamilyI would recommend this book to othersLGBTQ
Share 0 FacebookTwitterPinterestEmail