Walking the Divide: A Tale of a Journey Home by Halima Khan 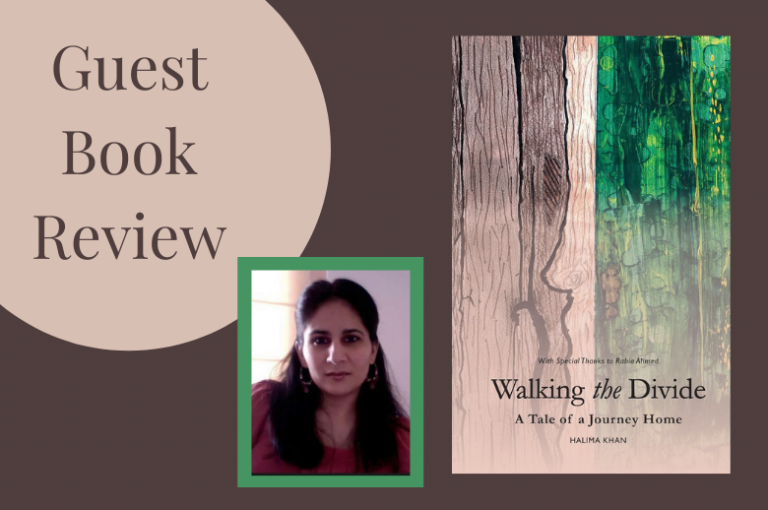 This lovely guest book review is by freelance writer Mariam Sarwar. Read more about her at the bottom of the review!

If you have made a life abroad, you would understand how hard the last year and a half has been. At times, I might have been unashamedly unthankful and even ignorant of the virtues of my homeland: Pakistan. There is no doubting home is home, and the pandemic has stirred a deep-embedded love for it.

Afternoons I lay on my bed, looking lovelorn, and the many nights I stayed awake gazing into an empty abyss were safely diagnosed as symptoms of homesickness. Feeling estranged in a place I had been calling home was unnerving, but the extent of this newly experienced condition grew as travel restrictions stayed in place.

Every Eid, every holiday, I longed to enjoy the sweet and sour, sometimes even spicy, family reunion. Amidst the controversies, the conspiracies and oh the endless conversation, families teeter-totter between love and hate. But, gotta admit, this pandemic proved that the balance tilts towards ‘can’t live without ‘em.’

As weeks turned into months and we continued to physically distance ourselves from the world, the need to mitigate this loss of sense of belonging became apparent. I decided to deal with it like any reader would deal with any situation.

I started reading everything and anything that reminded me of home: writers from Pakistan, books on Pakistan, historical accounts, a memoir, etc. I just finished reading such a book today – Walking the Divide. If the pandemic had not made me this homesick, I would have probably not ordered it, considering it is historical fiction. But I am glad I did!

The only historical fiction that I have ever read was Hemingway’s For Whom the Bell Tolls. While Graham Greene called it “a record more truthful than history,” I didn’t pursue the genre any further.

Acting out of character, I returned to the genre. Once I started reading Walking the Divide, I realized it was hard to categorize it as only historical fiction. It can be defined as subjective history, just as it can be called a memoir, unconventional but nonetheless.

Illustrating the real-life story of Syed Sardar Ahmad Khan, this biographical title is both absorbing and inspiring.

Walking the Divide, published by Sang-e-Meel publications, was released to mark 74 years of Independence on 14th August 2021. Curated by Halima Khan, it narrates the events that led to the Partition of 1947 with a range of emotions. In an increasingly divided world, the idea is to build empathy for the struggle and sacrifice of a generation for a cause bigger than themselves and an ideology they truly believed in.

In 1947, the British finally freed the Indian subcontinent after 200 years of control. They drew a line in the sand before leaving, and two new dominions emerged on the world map: Muslim-majority Pakistan and Hindu-majority India. Some 15 million people migrated (the most significant human migration in history), and one to two million perished in the communal violence that followed.

Several decades passed before a widespread effort was made to document survivors’ testimonies about their experiences. And this book is an addition to that effort, an interesting addition, I must say!

As part of the partition literature, this book encompasses fiction and nonfiction published with the heart and soul of those who bled to form this country. The focal point is about how one survivor’s story is either passed down or forgotten and the importance of preserving it.

“How do we know this event except through the ways in which it has been handed down to us: through fiction, memoirs, testimonies, through memories; individual and collective?”

The book is not an overhyped debut release. Nevertheless, the 192-page book offers the pageantry of promise as it puts centerstage a story that had travelled in some meaningful way from a dark chapter of history to do the most unexpected…usher in hope.

As I finished reading the book, I wondered about the possibility of reading another survivor’s tale curated by Halima Khan. This debut book holds the potential to be an overture to something significant. But, the question is, will this introduction keep unfolding? Or, it ends with the story of Syed Sardar Ahmad.

Walking the Divide indicates to be the embryonic blueprint of what we can’t yet imagine as it adds a fresh voice to an event that has been discussed and written about much.

Mariam Sarwar, freelance writer, playing mummy since 2012 and winging it as a trustee for a Women’s Empowerment Group as she champions the cause of Pink Ribbon. Masters in English Literature, she is taking a break from adulting to deep dive into the world of wimpy kids and Barbie adventures.