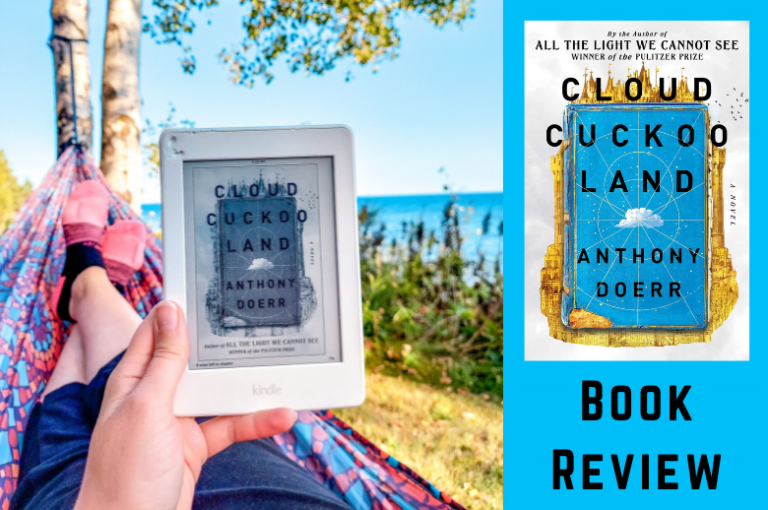 Oh hello, my most anticipated novel of the year 😍. Did Cloud Cuckoo Land by Anthony Doerr live up to my expectations? Read on to find out!

Thirteen-year-old Anna, an orphan, lives inside the formidable walls of Constantinople in a house of women who make their living embroidering the robes of priests. Restless, insatiably curious, Anna learns to read, and in this ancient city, famous for its libraries, she finds a book, the story of Aethon, who longs to be turned into a bird so that he can fly to a utopian paradise in the sky. This she reads to her ailing sister as the walls of the only place she has known are bombarded in the great siege of Constantinople. Outside the walls is Omeir, a village boy, miles from home, conscripted with his beloved oxen into the invading army. His path and Anna’s will cross.

Five hundred years later, in a library in Idaho, octogenarian Zeno, who learned Greek as a prisoner of war, rehearses five children in a play adaptation of Aethon’s story, preserved against all odds through centuries. Tucked among the library shelves is a bomb, planted by a troubled, idealistic teenager, Seymour. This is another siege. And in a not-so-distant future, on the interstellar ship Argos, Konstance is alone in a vault, copying on scraps of sacking the story of Aethon, told to her by her father. She has never set foot on our planet.

Wow. Sers. Wowsers. Guys, readers, book friends…I loved this book. This review is going to be hard to write because I’m just over here fangirling 😂. Okay though, here goes!

When I first started reading Cloud Cuckoo Land, I have to admit, I felt a little bit like I was reading five separate stories. Really, you are reading five separate stories. Yes you heard that right: 5. They all pulled me in and the whole world would disappear while I was lost in them, but they really were separate. Of course, there were two pairs that were in the same time period, so I knew they’d be coming together, but I still got a little bit lost in my brain sometimes, switching between them all.

BUT. But then, they start to inch closer to each other. A mysterious book/story emerges that’s mentioned in some way in all of them, and you start to see things coming together. I just…I’m dumbfounded as to how an author makes this happen. How does he make them inch together so perfectly?

On top of that, Doerr manages to make each story ridiculously compelling, and you’re like “NO!” when you have to move to another story, even when that one’s good, too. There’s suspense that lingers in between each one. You keep turning pages and you’re just so immersed in the story. It’s one of those all-consuming stories, where you just fall in and forget the real world. SO GOOD.

I really don’t know what else to say, besides please give this book a chance. I’ve heard that some people don’t like the amount of detail Doerr uses in his writing, which obviously I seem to love. If you’re one of those people…we can find a way to peacefully coexist 😂. I just loved this whole dang book.

Thank you to NetGalley and Scribner for letting me read this book before it comes out. I feel like I was gifted an amazing opportunity! I will definitely be buying this book for my shelves. 5 big, fat stars.