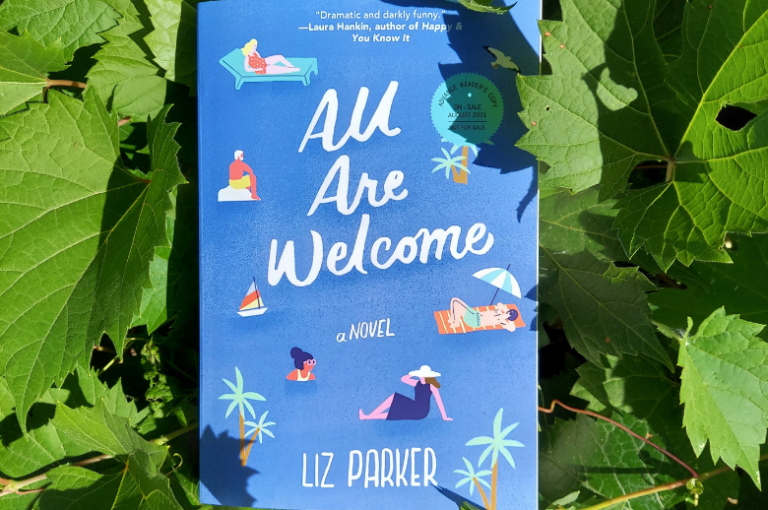 Welcome to the All Are Welcome by Liz Parker book tour! I’m happy to be a part of the tour for this summer read. Check out my review below!

Tiny McAllister never thought she’d get married. Not because she didn’t want to, but because she didn’t think girls from Connecticut married other girls. Yet here she is with Caroline, the love of her life, at their destination wedding on the Bermuda coast. In attendance—their respective families and a few choice friends. The conflict-phobic Tiny hopes for a beautiful weekend with her bride-to-be. But as the weekend unfolds, it starts to feel like there’s a skeleton in every closet of the resort.

From Tiny’s family members, who find the world is changing at an uncomfortable speed, to Caroline’s parents, who are engaged in conspiratorial whispers, to their friends, who packed secrets of their own—nobody seems entirely forthcoming. Not to mention the conspicuous no-show and a tempting visit from the past. What the celebration really needs now is a monsoon to help stir up all the long-held secrets, simmering discontent, and hidden agendas.

All Tiny wanted was to get married, but if she can make it through this squall of a wedding, she might just leave with more than a wife.

I had some mixed feelings about this book, but overall rated it pretty highly in the end!

Alright, where do I start with this book? Haha there was a lot going on!

Let’s start with Tiny and Caroline’s relationship. There are seeds of doubt sown pretty much immediately for the reader to wonder why they’re getting married, because there are clearly some issues. This was one of the parts of the story I wasn’t sure if I liked. It was so immediate that we see that this whole wedding thing probably isn’t going to end well.

Tiny and Caroline’s families are both flawed in many ways. There’s a lot of emotional distance, heavy drinking, and uncertainty about Tiny’s choice to marry another woman. It was honestly a little hard to read at times, because of the hemophobia from Tiny’s brother and weird, closeted feelings from her father. I really don’t doubt though that those tough situations exist in real life, so it made sense to me to include it in the book.

Every character in this book was very flawed in some way, which ended up making it…well, enjoyable. It was a massive train wreck that you could see coming, although there were a few surprises for me that I didn’t predict. It’s one of those stories where everything gets worse and worse, until finally there’s some sort of moment of reckoning.

The moment of reckoning was great. I won’t really go into it to avoid giving anything away, but I enjoyed when everything came to a head.

If you’re looking for a dysfunctional family in a beach read, this is your book. I read it quickly because I just had to know what craziness would be happening next. 3.5 stars from me!