Book Review: A Girl From Nowhere by James Maxwell 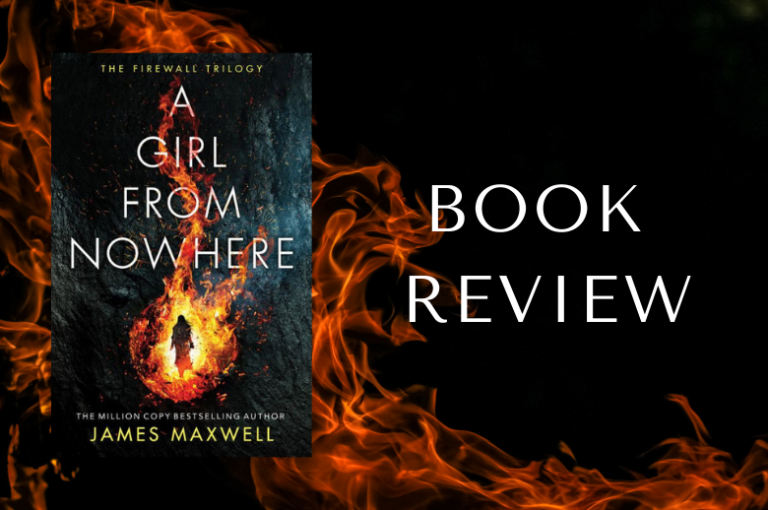 The following is a guest post by Heather R. Parker. Meet her down at the end of her review!

With a perfect blend of ethereal high concept fantasy and gritty sci-fi dystopia, James Maxwell hits the mark with his hit series Firewall Trilogy. The trilogy consists of three fast-paced, thrilling novels: A Girl From Nowhere, A World of Secrets, and A Search for Starlight. For this review, I will only be focusing on the first book.

Maxwell, best known for his epic fantasy The Evermen Saga, has created another must-read action-adventure painted against the backdrop of a bleak and barren wasteland, devoid of water, devoid of safety, and rife with hardship.

As an avid reader of both fantasy and science fiction, I fell in love with this series immediately! Maxwell is a master of both character and plot development, always leaving me aching for more when I finished each book. I felt so close to the characters, and his worldbuilding is so incredible you literally feel the searing heat from the wasteland, the grit in your eyes, and the desert wind like stale hot breath in your face. This is one of those classic “book hangover” series because when you finish the series you feel a sadness that it’s ended.

But I digress. Let’s unpack the summary, then I’ll give you some great reasons why you should read this incredible trilogy. Don’t worry, no spoilers.

Maxwell’s aforementioned wasteland, a character in its own right, is a desolate landscape scorched under its two suns Dex and Lux, and surrounded by a mysterious wall of fire no living thing can penetrate. What lies beyond the firewall, no one knows.

Our brave yet very relatable protagonist Taimin has always longed to know what was beyond the boundary of the firewall. Living in the wasteland on the firewall border all of his life, he longs for more. His life has been marked by trauma from an early age, having both lost his parents and sustaining a life-changing injury in an attack by human rovers at an early age. Told he would never survive in the wasteland with a maimed foot, Taimin doubts his own strength and abilities.

Yet despite the negative talk from his tough-his-nails aunt, who becomes his guardian, she trains him to live in the wasteland by teaching him independence, and ultimately survival, by teaching him to fight, hunt, and live in an uncertain land where one can be killed by roaming raiders or a ferocious firehound around every turn. The wasteland where Taimin abides has a tinge of Mad Max: the barren, rust-colored wasteland, the scarcity of water, the violence of the rovers and raiders, the warring and mistrust between the different races, the plucky protagonist bent on a mission to avenge his parents and carve out a better life for himself–are all exquisite sci-fi dystopia elements Maxwell uses to create this tangible, scorched desert Taimin calls home.

After his aunt is killed and his home destroyed in a raider attack by a group of nonhuman raiders, who Taimin views as a ferocious, violent species living in the wasteland, he sets off to seek revenge against both the humans who heartlessly murdered his parents and the raiders who so callously butchered his aunt.

Setting off across the wasteland with only his wits and his wherry, a juvenile wyvern named Griff, he meets a girl from nowhere—a mystic (and orphan like himself) named Selena, with her strange and stunning mismatched eyes. Instantly entranced by this beautiful, mysterious young woman, he joins with her and a rough rover named Lars and his two other companions, who have hired Selena to guide them through the wasteland to the fabled utopian white city that supposedly exists somewhere in the wasteland.

The mysterious city has always been a dream of Taimin’s, growing up with the stories of a white, walled city with an immense tower at its center plunging into the sky. It has become a journey for the citizens of the wasteland to make a pilgrimage to the walled city to find a better life: shelter, protection, water, and food, all in abundant supply. Taimin, Selena, and his new companions can only hope the city proves to be the utopia they hope it is so they can create new lives not only for themselves but for others as well.

Now that you have a basic rundown of the summary, let’s unpack a few of the many reasons why you should read book one of the Firewall Trilogy.

I felt Maxwell did a great job with themes of inclusivity in this first installment (and throughout the entire series). With the main character as a disabled hero, Maxwell is able to buck the norms of what a male hero “should” be. Taiman is strong and determined yes, but also physically flawed, his childhood injury affecting his ability to fight, run, or hunt without the help of his wherry. Spirited mystic Selena also suffers from a disabling physical ailment–blinding headaches and seizures, brought on by her strong powers, which she has not yet learned to control. Embarrassed by her ailment, like Taimin with this foot, the two begin to learn what strength really means, as their strengths are reflected in one another.

Yet it’s Taimin’s and Selena’s vulnerabilities that give them strength. Despite the doubts they both feel in themselves to survive in the wasteland with a physical disadvantage in a highly visceral world full of mortal dangers, they both constantly grit their teeth and pull themselves up by the bootstraps. Both characters do what has to be done with a strength that is marrow-deep, showing the wasteland, and readers alike, you should never underestimate or discount anyone from success, even if they seem to struggle. The struggle makes you stronger.

Taimin and Selena are phoenixes both, ascending from the ashes of childhood trauma and uncertainty to be two of the most important characters who fight and risk their lives, and the lives of their beloved friends, to build a better world for everyone—no matter your race, species, gender, ability, or disability.

Maxwell also shines with his strong female characters who set out to dismantle the patriarchy and establish an ideal of equitable leadership in a new world the citizens of the wasteland have always envisioned.

There is Abi, Taimin’s aunt, a survivor who is as tough physically as well as mentally; Selena, who has always survived on her own in the wasteland without a family; Ruth the healer, who puts her own life in danger to help others; and other nonhuman females, matriarchs of their respective tribes, who show strength and fortitude in times of utmost danger.

Themes of family run deeply in A Girl From Nowhere as well. Maxwell asks us as readers to define what family truly is. For Taimin, Selena, and so many citizens of the beleaguered wasteland, family isn’t defined by blood, as many like Taimin are alone in the world. The family in A Girl From Nowhere is forged in fire, not with blood or birth. With the main characters suffering so much loss, they thought they had nothing left to lose in their fight to create a better world–until they realize they can’t lose each other. Once they realize they can’t live without each other, their bond is sealed, and as we see throughout the entirety of the series, nothing can break it. Once banded together, nothing can stop them, even seemingly insurmountable obstacles.

Strength of the spirit — not just human

Many books touch on the themes of the strength of the human spirit. Yet in a universe filled with six distinct races, five of which are not human, we have to dig a little deeper than just the human spirit. It’s the survival of being a living being, a soul–it’s the soul’s greatest urge to fight for itself, to not only to live and survive but thrive –and the sparks of life within the sentient beings of A Girl From Nowhere have determination and grit coded into their DNA.

Despite the numerous hardships endured by all the species within the firewall, one undercurrent always remains–the resiliency of the soul, that spark of life that burns within us. It wasn’t only the strength in the main and supporting characters–it was the grim determination of the citizens of the wasteland as a whole that seek not just to endure but to flourish. They want a better world, and they unite as one to create it–and are willing to die to make it possible for others.

A Girl From Nowhere seems to serve as a reflection of our times, through the lens of high concept fantasy and dystopian science fiction. Like the characters in Maxwell’s universe, underrepresented, once silenced voices are now forging a new world for everyone, a world that strives to include everyone, so that we are all thriving, and not just…enduring. We as citizens of Earth are taking action to fight for a better world for all, dismantling the structures of oppression from the top down to create a more inclusive, peaceful world for everyone.

A Girl from Nowhere
The Firewall Trilogy
James Maxwell
47North
May 1, 2020
Paperback
446 pages

Heather R. Parker is a published poet, essayist, freelance writer, and avid reader. She is the author of a poetry collection entitled Fallen Whispers and in 2019 she was named one of the Top Ten Micropoets of the year by Nightingale & Sparrow literary magazine and included in the anthology of the same name. She lives in Georgia with her family and a delightful menagerie of animals. Formerly an English teacher, Heather is now a full-time freelance writer working on her first novel. Follow more of her work at:
https://fictionate.me/blog
https://medium.com/@hrparker
Instagram: @heather_r_parker

This sounds like a great read! And what a wonderful review.