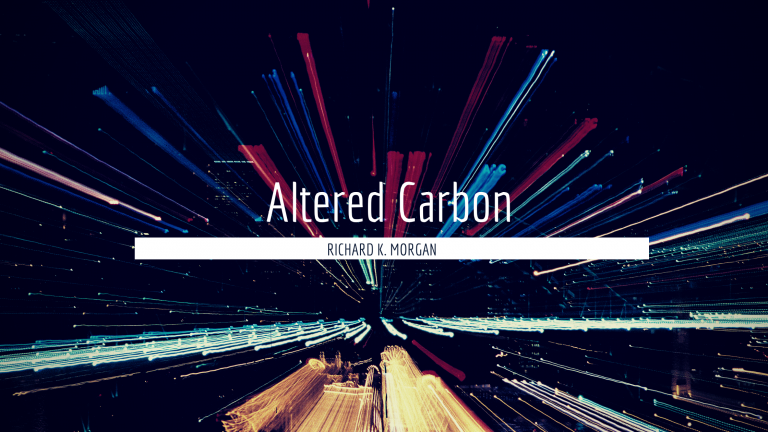 I learned about this cyberpunk series a while ago, when Netflix announced season two of their adaptations. The noir plot and cyberpunk aesthetic intrigued me enough to start the books. The first book isn’t without its flaws, but the futuristic twist on noir tropes makes for a great story. I’ll definitely watch the show to see how they’ve adapted the better parts of the plot.

In the twenty-fifth century, humanity has largely abandoned Earth in favor of colonizing other planets and traveling through space. The U.N. monitors these activities, but some things manage to slip through the cracks. This is especially true when all of human consciousness is stored digitally. Any consciousness, or stack, can be beamed into any body, or sleeve, from just about anywhere. This makes death harder to accomplish…or trace.

Enter Takeshi Kovacs, a criminal and former soldier whose consciousness has been suspended in an intergalactic prison for over a century. An obscenely wealthy fellow named Bancroft makes an offer that Kovacs can’t refuse. In exchange for his early release, if Kovacs can figure out who murdered Bancroft’s previous sleeve, he will officially be given his freedom.

Unfortunately for the criminal turned private eye, everyone besides Bancroft believes he killed himself. Also, Kovac’s past is determined to haunt him, even on the primitive and distant surface of the Earth.

The plot of this book promises intrigue. It delivers, but only when Kovacs is focused on solving the case. Otherwise, the story grinds to a halt for some bizarre sex scenes and the objectification of nearly every female character.

I would rate this book at three stars, since the noir plot meshed with cyberpunk technology is fascinating. However, I do wish Morgan had consulted with a female audience or editor before publishing this book. Personally, it feels like several of the women only exist for the gratuitous sex scenes. There is also a lot of violence, although it is easier to digest.

When the book actually tells a story, it explores some interesting philosophies that are directly related to the advancements in technology and shifts in culture. For example, should religions be allowed to bar their followers from testifying posthumously, as they view getting new sleeves as immoral? How physical and psychological are our relationships, and to what degree can the two be separated?

I plan on watching at least the first season of the Netflix series with the hopes that they have kept the plot and discarded the unnecessary amount of sex and violence. Set in a future in which interstellar travel is facilitated by transferring consciousnesses between bodies, it follows the attempt of Takeshi Kovacs, a former U.N. elite soldier turned private investigator, to investigate a rich man’s death.