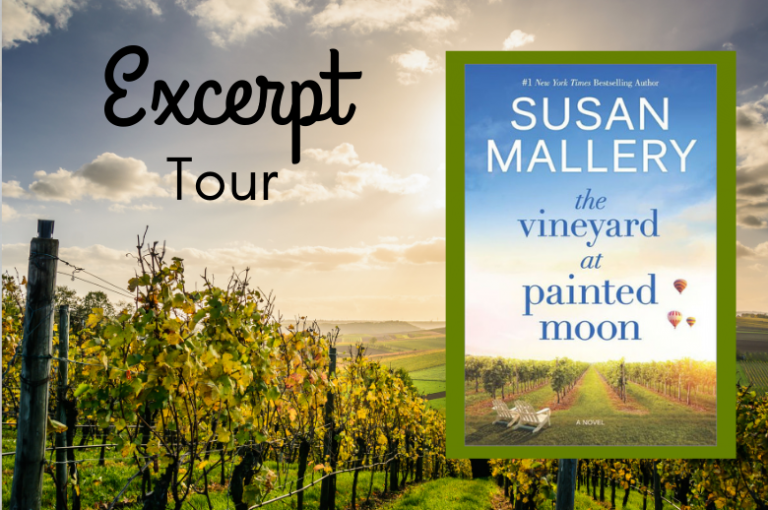 Welcome to our first ever excerpt tour! Instead of posting a review, every stop on this tour posts an excerpt from the book, in order. So basically, you get to read the first few chapters of this book! Cool, right?

Without any further ado…

About The Vineyard at Painted Moon

Step into the vineyard with Susan Mallery’s most irresistible novel yet, as one woman searches for the perfect blend of love, family and wine.

Mackenzie Dienes seems to have it all—a beautiful home, close friends and a successful career as an elite winemaker with the family winery. There’s just one problem—it’s not her family, it’s her husband’s. In fact, everything in her life is tied to him—his mother is the closest thing to a mom that she’s ever had, their home is on the family compound, his sister is her best friend. So when she and her husband admit their marriage is over, her pain goes beyond heartbreak. She’s on the brink of losing everything. Her job, her home, her friends and, worst of all, her family.

Staying is an option. She can continue to work at the winery, be friends with her mother-in-law, hug her nieces and nephews—but as an employee, nothing more. Or she can surrender every piece of her heart in order to build a legacy of her own. If she can dare to let go of the life she thought she wanted, she might discover something even more beautiful waiting for her beneath a painted moon.

Barbara had no idea what was happening, and she didn’t like that one bit. She looked between Stephanie and Giorgio, hoping they weren’t going to do something ridiculous like sing a duet. Stephanie didn’t have much of a voice.

Still, she trusted Giorgio. The man took care of her the way no one ever had, so she should just relax and pretend to enjoy whatever silly thing they had planned.

Giorgio smiled at her as he spoke into the microphone. “Hello, my love.”

She smiled back without speaking. He knew she didn’t like to be played for a fool and she trusted him. Whatever misgivings she had, she should ignore.

He glanced at the circle of people around them. “For those of you who don’t know me very well, I met this wonderful woman two years ago, in Italy. We were tasting wine at a little place outside of Tuscany. The day was beautiful, but the woman next to me was even more appealing. I found myself unable to look away.”

“You were very charming,” she said, relaxing as he spoke.

“On the outside. On the inside, my heart was beating so quickly. At my age, that can be a dangerous thing.”

“I introduced myself and suggested we share a glass of wine.” He smiled again. “She agreed and I was so happy, I could barely speak. You told me about Bel Après and your children and Mackenzie, and I could hear the love and pride in your voice. Within the hour, I was smitten.”

Barbara felt herself getting lost in the memories of that first meeting. He’d surprised her by talking to her. She hadn’t known what to think. Handsome men simply didn’t ever talk to her— not the way he had. He’d been funny and kind and the afternoon had flown by.

“I was married before,” he said. “My wife passed away five years ago, and it never occurred to me that I would find love again, but I have. A great, glorious love that has filled my heart.”

She placed her hands on her chest and mouthed, “Me, too.”

He handed Stephanie the microphone and took something out of a small bag, then stunned her by dropping to one knee.

“Barbara Barcellona, you are the love of my life. I love you and adore you. I want to make you happy, and spend the rest of my days with you. Will you marry me?”

She hadn’t seen it coming, she thought, genuinely stunned by the proposal. She stared at Giorgio, trying to take it all in. The sound of the music retreated until she could hear only her own heartbeat.

Happiness swelled, becoming joy, and she knew that she would never again experience a moment so perfect.

“Yes,” she said, fighting tears. “Oh, yes, Giorgio. I’ll marry you.” Around them, everyone began to cheer and applaud. He stood and slid a large diamond solitaire onto her finger, then cupped her face and kissed her. The feel of his warm lips on hers was magical. She felt like a princess. She felt thirty years younger.

“I love you,” he whispered into her ear.

Around them, the clapping continued. Her children gathered around, hugging her and Giorgio.

“Did you know?” she asked Rhys.

Rhys grinned. “He asked for my permission. It was very honorable of him and I’m happy for you both, Mom.”

“I didn’t know,” Mackenzie said, kissing her cheek. “Barbara, congratulations. You’re going to be a beautiful bride. I know Giorgio will make you so happy.”

Four and Lori rushed in to hug her.

“No one told us,” Four said with a laugh. “What a wonderful surprise.”

Barbara supposed the living arrangements would be a problem. Lori had never moved out of the large family home at the center of the compound. It was one thing to have Giorgio staying there when he visited, but another to have him a permanent resident. A problem she would deal with tomorrow, she told herself, determined to enjoy every moment of the very perfect evening.

The music resumed and Giorgio drew her to the dance floor. She laughed when she heard the opening notes of “Lady in Red,” then glanced down at her red cocktail dress.

“So that’s why you asked me to wear this,” she said, gazing up at him.

“It was all part of the plan.”

She leaned her head against his shoulder. “I was surprised.”

“They kept the secret.”

She looked at him.

“I don’t want you to worry about anything,” he said, his gaze filled with affection. “I’ll be happy to sign a prenuptial agreement. I want no part of Bel Après.”

She hadn’t even thought of a prenup. She would have, probably before midnight, which would have kept her up the rest of the night. “Thank you for that. I’ll sign whatever you want, as well.”

Giorgio had plenty of money from the aerospace manufacturing firm he’d run in upstate New York.

She raised herself on tiptoe and whispered in his ear, “Yes, and later, we’re going to have lots of modern sex.”

He chuckled. “How is it modern? I think of our lovemaking style as more traditional.”

She grinned. “We keep the lights on.”

Friday, February 5th: What is That Book About

Thank you for featuring this! Sara @ TLC Book Tours