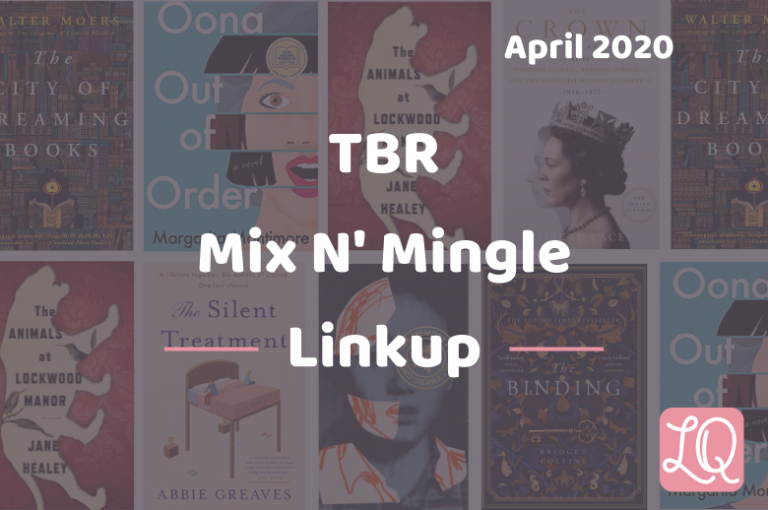 Welcome to another Mix n’ Mingle linkup! First things first – how are you doing? It’s such a not business-as-usual time. Whether you’re reading for comfort or bingeing some seasons on Netflix or doing puzzles or crafting or whatever it is that brings you some sanity, that’s awesome. If you want some reading ideas, check out our Reading for Comfort in an Uncertain World post <3.

Now, on to the books! Here are some of our TBR lists for April. What are you planning on reading?

I’ve just started The Binding by Bridget Collins. It tells the story of Emmett the farmer boy in 19th century England who is mysteriously chosen by the Binder to be her apprentice. Based on the cover, I think it’s got magic, mystery and lots of books so I think it’ll be a good one!

You know those times when you go a little crazy with library hold requests and then all the books come in at the same time? Yep, that just happened to me (with ebooks of course). Luckily, the Libby app lets you keep your spot but push out the hold however far you need it, so I just pushed multiple out. If all goes according to plan in April, I’ll finish The Ten Thousand Doors of January and then move on to:

The Animals at Lockwood Manor by Jane Healey – I won this in a giveaway in March and I’m looking forward to reading it this month! It’s historical fiction with elements of fantasy and mystery, and just sounds pretty awesome overall. “When a young woman is tasked with safeguarding a natural history collection as it is spirited out of London during World War II, she discovers her new manor home is a place of secrets and terror instead of protection.”

We Have Always Been Here by Samra Habib- This is my book club’s pick for this month. It’s described as “a queer muslim memoir” and should be very good! It’s been a while since I read a memoir and I miss them, so looking forward to it. This one is also pretty short, which will be nice to have in between some longer ones.

I recently got my digital copy of The Crown: The Official Companion, Volume 2: Political Scandal, Personal Struggle, and the Years that Defined Elizabeth II by Robert Lacey, which I’m excited to read after catching up on the show over Christmas with my family. After that, I’ll work on catching up on some books on my shelves I haven’t had a chance to read yet, starting with Jennifer Close’s The Hopefuls…if anyone has read it, I would love to hear your thoughts!

I panic-bought some books on Amazon a week ago in anticipation of longer shipping times and I’m excited to dive into them this month!

First I’ll be reading The City of Dreaming Books by Walter Moers, a 2004 novel I only recently heard about from BookTube. I’m not entirely sure what it’s about, but it seems to be a really whimsical novel (with illustrations!) about a city completely filled with books where reading can be dangerous and bookhunters fight to the death. If you’re confused by that description, you’re not alone! This one should be interesting.

I’ll also be reading The Memory Police by Yoko Ogawa, an Orwellian novel translated from Japanese about an unnamed island whose inhabitants experience collective gradual amnesia. Every day a seemingly random object (birds, roses, boats) begins to fade from their memory, and if they try to stop it they’ll be punished by the Memory Police. Super excited to start this one!

Oona Out of Order by Margarita Montimore – A bookstagram friend recently let me borrow this so I’m planning to read it immediately! She gave it rave reviews and I have a feeling I’ll have the same reaction. Oona wakes up at different points throughout her life with no warning. As this pattern continues, she learns to live each part of her life in the moment.

The Silent Treatment by Abbie Greaves – I’m reading this right now for an upcoming book tour and it’s unexpectedly difficult. We meet a couple after the wife attempts to commit suicide because her husband hasn’t spoken to her in six months. The husband is tasked with talking to his wife while she’s in a coma. So, he’s recapping their entire relationship, with the end goal of explaining how much he loves her and why he’s put her through this.

What are you planning to read this month?